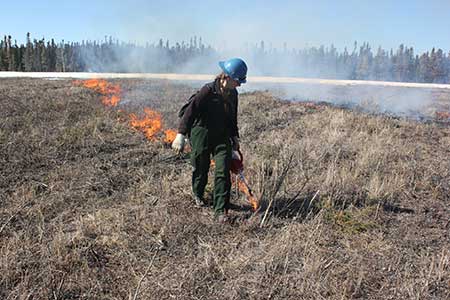 Sue Rodman puts fire on the ground. About 800 acres of the Delta Junction Bison Range were burned in April 2017 to enhance habitat for wildlife. Photo Tim Mowry/Alaska Division of Forestry.

Lighted drip torch in hand, Sue Rodman tipped the head of the torch toward the ground and began walking across a corner of the Delta Junction Bison Range. A line of flame followed her as a combination of diesel fuel and gasoline dripped from the burning torch onto a mat of dead grass and willow staubs cut the previous fall.

“We’ve got fire on the ground,” burn boss trainee Gabe Pease-Madore from the Alaska Division of Forestry announced into his radio.

And with that, the first prescribed fire on the Delta Junction Bison Range in five years was underway.

Assisted by a slight breeze out of the southeast and dry fuels, the fire took hold quickly. Within a few seconds, the flames crackled and sizzled. The breeze pushed the fire toward a snowdrift at the edge of the field, precisely where it was supposed to go – and stop.

“Nice,” Pease-Madore said as he watched the line of flame trailing Rodman grow.

Rodman and a handful of State Forestry firefighters repeated the process multiple times over the next two days, burning off small chunks of grass, aspen and willow to ensure the fire remained under control. By the end of the weekend, more than 800 acres of the bison range were blackened by fire.

ADF&G has wanted to reintroduce prescribed fire to the bison range for several years to improve habitat for one of Alaska’s largest big game animals. Created by the Alaska Legislature in 1979 to perpetuate free-ranging bison, the Delta Junction Bison Range encompasses nearly 90,000 acres north of the Granite Mountains between Granite Creek and the Little Gerstle River, about 20 miles east of Delta Junction along the Alaska Highway. 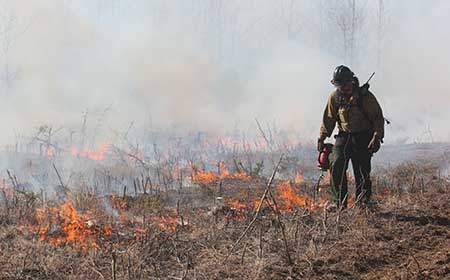 With assistance from the Division of Forestry, and technical expertise from the BLM Alaska Fire Service, ADF&G developed a burn plan to support the production of graminoids (grasses and sedges), important food sources for bison, and hardwood regeneration for moose, along with providing habitat benefits to sharp-tailed grouse.

Rodman, program coordinator for ADF&G, said the goal of the burn was to burn up grass and brush that was overtaking the bison range.

“When the fields were cleared many years ago, the intent was to manage them for graminoids to attract bison south of the (Delta) agricultural project,” Rodman said. “Over time, the willow and aspen regeneration caught up to prescribed burning and mechanical tilling, eventually surpassing our annual treatment capability when we stopped using prescribed fire on a regular basis.” 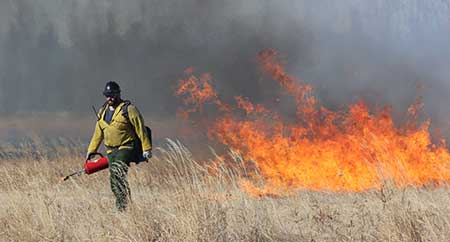 The plan for last weekend’s burn contained specific parameters to be followed in terms of maximum and minimum wind speeds, temperatures, relative humidity, fuel moisture codes, rate of fire spread and flame lengths. In addition, a 20-foot fuel break was tilled around each burn unit to prevent the fire from spreading into the surrounding forest.Conditions for the burn were ideal for the most part. While there were still patches of snow on parts of the burn area, most of the grass, aspen and willows were dry enough to provide good fuel consumption.

“I’m ecstatic,” Rodman said, smudges of dirt and ash on her face as she watched a section of grass go up in flames. “I’m so happy this is working so well. It’ll be patchy, which is just what we want.” 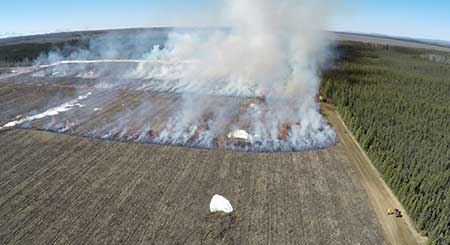 This aerial photograph taken from an unmanned aerial system (a drone) shows the bison range. This is the first time ADF&G and the Division of Forestry have used a drone on a fire in Alaska. Photo courtesy Alaska Fire Service

“Mechanical brush hog treatments can only accomplish so many acres annually, based on the budget for the bison range,” Rodman said. “Tilling and planting happens every year, but we focus on those acres that are maintained.

“Once the brush has established itself in an area because we couldn’t treat it for a few years, then it is much harder to get back into a condition where we can till and plant it back to grass, oats or turnips,” she said.

While the Division of Forestry executed the actual burn, providing personnel and equipment to support the operation, the Bureau of Land Management’s Alaska Fire Service also played a key role by offering technical expertise, logistical help and consultation. AFS supplied a qualified burn boss for the burn and other AFS personnel used an unmanned aerial system (UAS, commonly known as a drone) to capture aerial footage and images of the prescribed fire to document fire behavior and operational procedures. It marked the first time the agency has used a drone on a fire in Alaska.

UAS pilot Kato Howard said use of the drone – a 3DR quadcopter with a GoPro mounted gimbal - was a huge success, both in terms of the quality of video and pictures, as well as illustrating the potential for UAS use on wildfires, something both AFS and DOF will be experimenting with this fire season. 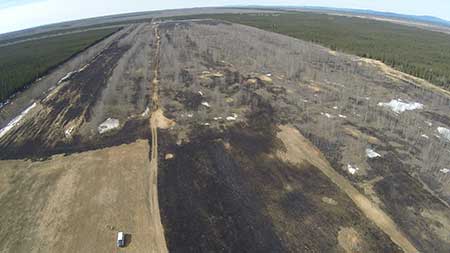 While the original intent was to burn as much as 3,600 acres, some of the ground and fuels were too wet and the size of the burn was scaled down. About 800 acres were burned. Photo courtesy Alaska Fire Service

“What amazed us is you get a totally different view of the fire than you get on the ground” said Howard, a fuels management specialist for AFS who took classes this past winter to get his UAS certification. “We were surprised at what we could see beyond the line of sight of the UAS itself.

“The camera can get good, quality images at a distance,” he said, adding that he was also impressed at the clarity of the images and how stable the drone was in the wind.

From a fire viewpoint, Delta Area Fire Management Officer Mike Goyette said last weekend’s prescribed burn was a success and provided good training for Division of Forestry personnel. While the original intent was to burn as much as 3,600 acres, some of the ground and fuels were too wet and the size of the burn was scaled down. But the burn laid the foundation for more prescribed burning on the bison range in future years, Goyette said.

ADF&G will monitor and evaluate the vegetative response to the burn later this summer to measure mortality and what grew back in the form of grass, aspen and willow.

“For the most part, we expect positive results from this burn,” Rodman said.

Tim Mowry is the statewide public information officer for the Alaska Division of Forestry based in Fairbanks.