In Wild Trust
Larry Aumiller and the McNeil River Story 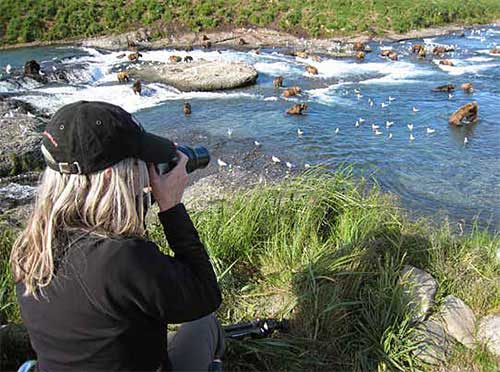 Bear viewing at the platform - the main viewing area - at McNeil River Falls.

The densest concentration of brown bears on Earth can be found in summer at the McNeil River State Game Sanctuary. Visitors watch and photograph these bears at unbelievably close range, without any barriers between them. This year marks the fiftieth anniversary of the creation of the sanctuary. It also marks the publication of In Wild Trust, the story of this unique place and why it is a success.

Alaska writer and biologist Jeff Fair wrote the book over a ten-year period. It features hundreds of photographs by Larry Aumiller, the first McNeil manager, who spent thirty summers at McNeil. The book is also the story of Aumiller, and how his insights into bear behavior – and human behavior – created the guidelines for bear viewing at McNeil.

The sanctuary, 250 air miles southwest of Anchorage, protects about 200 square miles of wildlife habitat. In some years as many as 144 individual bears have been observed at McNeil River over the course of the summer. Much of the viewing takes place at McNeil River falls, about a mile upstream from the mouth of the river at Kamishak Bay.

Visitors fly in to the remote site and stay at a camp about a mile from the falls. Group size is limited to 10. No one has ever been injured by a bear at McNeil River, and since the permit program was initiated, no bears have been killed by visitors who felt threatened. The title of the new book is tied to that safety record – and the reason behind it.

“The first title we considered was In Bear Trust, then In Wild Trust, because that sums up the whole thing,” Aumiller said. “We trust them and they trust us. We didn’t know that could be, but everything is based on this trust. They are trustable. They are not unpredictable.” 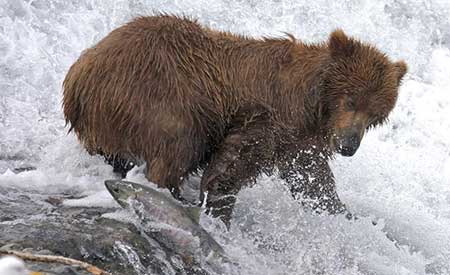 A chum salmon darts by a fishing bear the the falls. Drew Hamilton photo.

Brown bears can be depended on to be consistent, Aumiller said, especially when human behavior is consistent. That was not understood when Aumiller started as manager in the mid-1970s.

“The big misconception at the time was that bears and people can’t be in the same space,” Aumiller said. “People didn't think people and bears could be together at all. If you saw a bear you needed to get the gun out, do something. And McNeil showed that you can be together, that was the milestone.”

Aumiller noted that the McNeil sanctuary was established in the late 1960s to protect the bears, not necessarily as a bear viewing area. By the mid-1970s, Jim Faro, the area biologist at the time, recognized the need for a manager on-site in summer. The sanctuary was getting overrun with gun-toting visitors, and there were no guidelines for behavior in place. Aumiller and Faro established protocols for human behavior in the camp area, on the trail, and at the viewing pad near the falls.

“We tried to do things that were safe, and we then learned that things we did that made us comfortable made the bears comfortable,” Aumiller said. “Different agencies have different mandates; McNeill has a single mandate - maintain the concentration of bears. Not get the most people through. That helped.”

In Wild Trust author Jeff Fair writes about Aumiller’s first bear encounter on his very first day, to his thoughts for the future, touching on significant events, interesting stories and other highlights from Aumiller’s thirty-plus years at McNeil. The steep learning curve in the early years is of particular interest, when Aumiller began establishing the ground rules and practices. 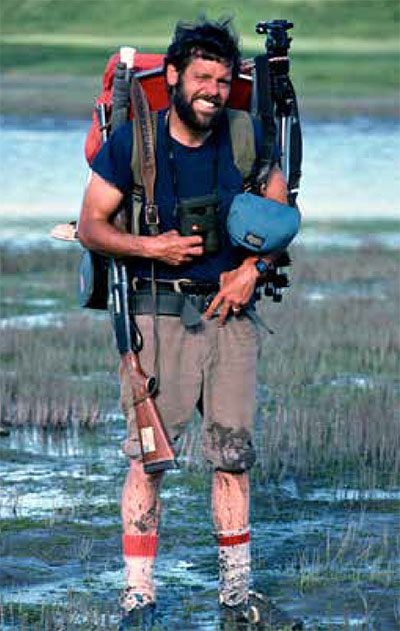 Larry Aumiller at work in the 1980s. A rare day without hip waders.

During those thirty summers, Aumiller spent 12,600 hours watching bears, welcomed and guided more than 6,000 visitors at the sanctuary, and counted more than 60,000 bear encounters. He brought his daughter to the sanctuary from the time she was a toddler. He hosted some of the world’s most notable bear biologists and wildlife photographers. Bear biologist John Hechtel described McNeil by saying, “Here you can have a once-in-a-lifetime experience every day.”

Aumiller described the McNeil experience. “People are there about four days. They get off the plane and they’re still tuned into their other life, they’re not sure what to do. They put up their tent, and shuffle around the first night. But day two, day three, they get it. There’s a whole world out there that has nothing to do with electricity. It reconnects people with the world, to nature, it’s very cool. By the time they leave, they’ve had the best time, and they’re shaking your hand.”

Author Jeff Fair is a wildlife biologist who has specialized in loons for the past 40 years. He’s based in Palmer. He’s contributed articles to a number of magazines and anthologies. He wrote “The Great American Bear,” a coffetable book, with biologist and photographer Lynn Rogers of Minnesota. He also wrote three children’s books, “Bears for Kids,” “Moose for Kids,” and “Raccoons for Kids.”

Shortly after Fair moved to Alaska in the mid-1990s, one of the children’s books was selected for the Alaska Association of School Librarians “Battle of the Books” statewide reading program. 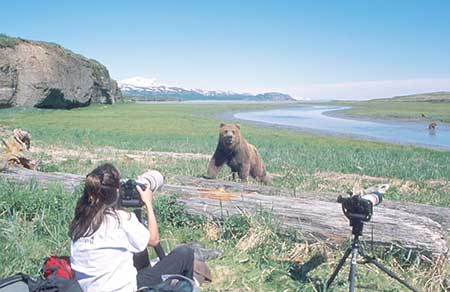 “So I started visiting schools all over the state, and what a great introduction to Alaska that was,” he said.

“I knew about Larry before I moved to Alaska,” he said. “I met him in 1993, the first time I came up to Alaska, to talk about loons. I got to know him better when I moved to Anchorage. I got out to McNeil in 2000 on a scientific education permit. The place blew my mind, I’d been in Alaska for a while but I’d never seen anything like that.”

He said around 2005 Aumiller invited him to collaborate on the book project. Fair spent about 30 hours interviewing Aumiller, and also interviewed Aumiller’s wife, biologist Colleen Matt. But the major sources for the book were Aumiller’s annual journals, dozens of hand-written spiral notebooks.

Fair read them all twice. “I spent one winter reading them, basically to see what was there, and what we hadn’t covered in interviews,” he said. “The second winter I went back through knowing what was there, and annotated what would be a good story, and that’s how I found my thread to tell his story.”

“There is so much in those journals. There was one place he talked about a young bear being killed by an older female with cubs. That was something he never told me about. He wrote about how the dead two-year-old’s tracks lasted longer than the carcass. The bears, gulls and eagles were picking away at the carcass, until it was completely eaten, and the bear’s tracks in the mud were still there, they lasted longer than the bear did. 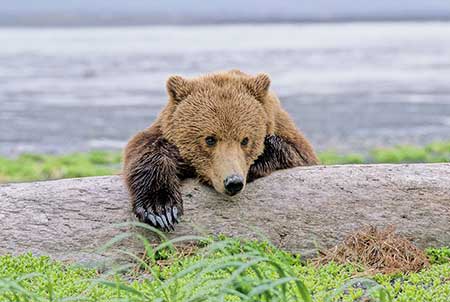 “That was a metaphor for Larry. His own tracks last at McNeil, and they will for a long, long time.”

All is free and public is welcome

The 50th Anniversary Celebration of the McNeil River State Game Sanctuary is 7:30 pm May 11th at the Bear Tooth Theatre in Anchorage. Guests include biologist and educator Colleen Matt; Clem Tillion, the Alaska state legislator who proposed the original legislation and helped get the designation in place; writer and photographer Tom Walker, co-author of “River of Bears;” and wildlife biologist and author Doug Chadwick. Larry Aumiller and Jeff Fair will attend. The presentation will include some of Aumiller’s photographs as well.

More information on the event

“In Wild Trust: Larry Aumiller’s 30 Years Among the McNeil River Brown Bears” is published by The University of Alaska Press.