How Biologists Estimate Populations of Animals 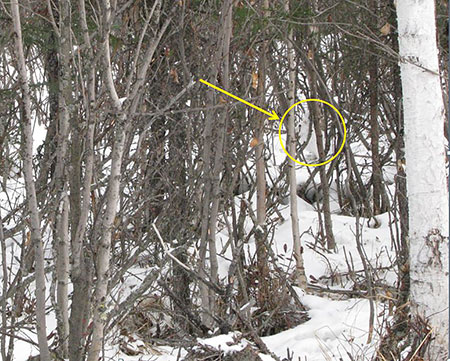 Biologists use a variety of methods to estimate populations. Counting animals like this camouflaged snowshoe hare can be difficult. Kari Rasmussen photo.

One of the great perks of living in Alaska is sharing our space with a variety of wildlife. Whether we are curious about our next hunting opportunities, or eager to watch wildlife, we often wonder about the animals living in our own backyards. Have you ever considered how many bears are hibernating near you on cold winter evenings? When you see a moose outside your window do you imagine there might be more you do not see? Wildlife managers and researchers work diligently to find out how many individuals of a particular species live in a certain area. Their jobs are necessary to ensure the conservation of wildlife, particularly for animals that are hunted.

Tim Peltier, a biologist for the Alaska Department of Fish and Game (ADF&G) in Palmer, explains one of the reasons why biologists have such an important job.

“We count moose, caribou, sheep, and to a lesser extent bears and wolves,” he said. “The Board (of Game) has determined the population and harvest objective in each area and we are tasked with determining how close we are to those objectives. We need to have an idea of the population size.”

How do biologists determine the number of animals living in an area? A variety of methods are used to determine populations. A biologist must consider the ecosystem, terrain, the species being counted; and must also factor in weather, costs, and time.

It would be ideal to see and count each individual animal in a population. This is called a census. Unfortunately, there is no simple way to do this. Animals move from place to place, they hide, they hibernate, and they are often camouflaged and difficult to see in their environment. The closest thing to conducting a census in Alaska is counting caribou such as the Western Arctic Herd on the North Slope. During the summer, caribou huddle up on snow fields for relief from mosquitoes and other insect pests. Viewed from above, the brown caribou on the white, snowy background are relatively easy to see. Biologists fly over these groups of caribou, systematically taking pictures as they go. Back in the office, every picture is analyzed and biologists zoom in and count each caribou individually. It is an important and time consuming project – hundreds of thousands of caribou can be counted in more than 1,000 pictures. 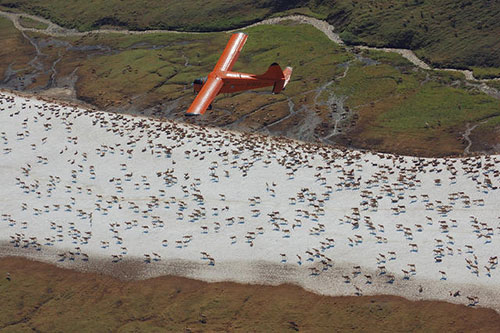 Another efficient method researchers have developed to estimate populations is called “capture-mark-recapture.” Instead of trying to count every animal, biologists randomly capture a sample group of the population, mark it, release it, and then do a series of recaptures that will allow them to estimate the entire population in a particular study area. One easy way to understand this method is to see how Alaska teachers are learning to use ADF&G’s curriculum Wildlife for the Future in their classroom lessons.

Last fall in Nome, 16 teachers were each given a container filled with beans. Their first task was to write down the number of beans they thought were in their container. The teachers used a variety of strategies to come up with their visual estimates. Many took random guesses without much forethought, some relied solely on their sight by counting as many beans as were visible to them, and others counted the rows and columns of the beans and multiplied to determine their estimate. 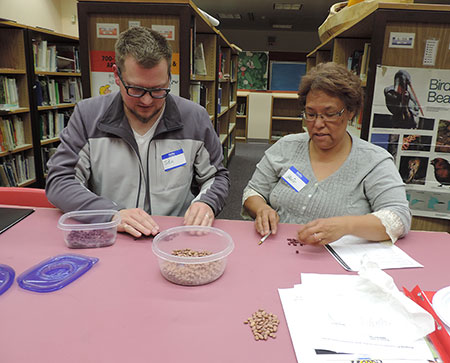 Teachers Josie Bourdon and Justin Heinrich in Nome, Alaska use ADF&G’s Wildlife for the Future lessons to learn about the population estimate method: capture-mark-recapture.

Then they applied the “mark-recapture” technique. Each teacher reached into the bowl of beans to “capture” a handful of “animals.” They counted the captured beans and recorded this number on a data sheet. Before putting the beans back in the bowl, they “marked” the captured beans by replacing them with the same number of beans of a different color – these then became the “marked animals.” After thoroughly mixing the beans they did a series of “recaptures” by again grabbing a handful of beans, counting the total number of “animals” captured, recording that number, and then recording the number of marked “animals” in each recapture. They did this 10 times. Once all 10 recaptures were finished they calculated the average number of beans for the recaptures and then the average number of “marked,” or different colored beans, in the recaptures. They put these two averages along with the number in the first sample count in to a mathematical formula and calculated the scientific estimate of the population of beans in the container. Finally, they dumped the beans out and counted each individual bean for an accurate count, or census, of the bean “population.” Nearly every teacher came up with a less than five percent error rate between their scientific estimate and the actual count, a much narrower margin of error than their own visual estimate. 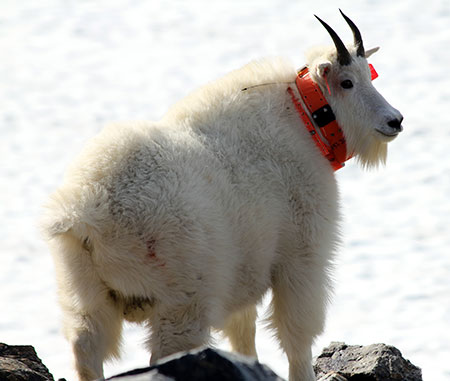 State wildlife biologist Stephen Bethune, based in Sitka, explains how this works in real life. On Baranof Island mountain goats are captured and fitted with bright red or orange collars and ear tags.

“We know we never see all the goats in a given area, but having marked goats on the landscape allows us to determine the sightability of goats during that survey,” he said. “For example, if there are 10 marked goats in an area and we see seven, we would apply a 70% sightability correction factor to a survey. So if we counted 50 goats, applying the correction factor we can estimate there were 71 goats in the area.”

Biologists then use the collars to conduct what are called aerial surveys, where they monitor survival and kid production to help build population models. “The more sightability surveys we conduct, the more refined our sightability factors can be calculated,” Bethune said. “We are able to monitor the general health of the population to help set appropriate harvest quotas in hunt zones.” 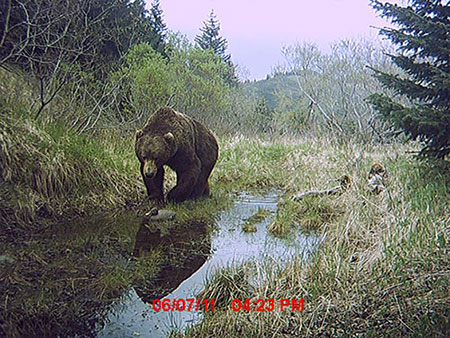 These ISA’s must be done after bears exit winter dens in the spring, but before vegetation green-up so surveyors can identify both individual bears and family groups without vegetation obstructing their view. Time is of the essence. In recent years, earlier green-up than normal has presented some challenges for biologists. They must start surveying earlier in the year while making sure they acquire accurate estimates of all bears, as some bears may not have exited dens yet, specifically females with young. In spite of challenges, Svoboda continues managing for a sustainable harvest and sustainable population and is investigating options to develop a robust population estimate for the Kodiak Island brown bears.

Obtaining a population estimate is a big job for management and research biologists. Whether conducting a census, an aerial survey, a capture-mark-recapture survey or one of the many other methods used to obtain an accurate estimate, each one provides important information to better understanding wildlife. So, next time you see a moose outside your door and you wonder if more are out there, rest assured that Alaska’s wildlife biologists are curious about that too. And, they will continue to work to help keep Alaska’s wildlife populations healthy and sustainable, now, and for future generations of wildlife enthusiasts.