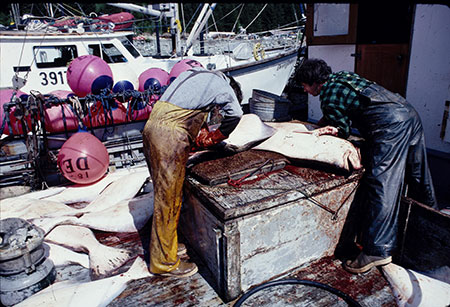 Sustainable management of Alaska’s abundant fishery resources depends on knowing a few key statistics: how many of what species are caught, when, and where.

This has been an issue since the beginning. In 1892, salmon canneries were spreading from Southeast to Bristol Bay and Congress required the first statistical reports on Alaska’s fisheries. These early reports left a lot to be desired. The catch data was based on each cannery’s self-reported production records. The Treasury agents in charge then kept better statistics on imports of booze into Alaska than they did on the number of fish be­ing shipped out. Priorities.

By 1905, they wanted a better idea where all these fish were being caught so they divided catch information by region: South­east, Central Alaska (Cordova, Cook Inlet, Karluk, and Chignik), and Western Alaska, which at the time was just Bristol Bay. The total in 1905, a respectable 117 million pounds, was composed mostly of salmon. While they started to narrow down on where fish were being caught, it was still mainly economic data that was being collected. Nobody was really managing fisheries then.

Biology first became an issue with halibut. Halibut catches along the Pacific coast grew in the early 20th century, but catch rates declined. Halibut fishermen had to fish longer and sail farther to catch the same amount. It was a big enough problem in the 1920s that the United States and Canada signed a halibut treaty and hired a promising young Stanford graduate to figure it all out.

William F. Thompson applied science to the problem. In 1927, he carved out the first statistical areas along the Pacific coast. He cre­ated 35 areas from Coos Bay, Oregon, to Unimak Pass, creating a new statistical area every 60 miles. The data generated led to one of the Halibut Commission’s first actions. Thompson’s data showed that half the halibut catch came from south of Cape Spencer, near the top of the Southeast panhandle, and the other half came west of it. Cape Spencer became the first district line in the halibut fishery and remains in effect to this day. 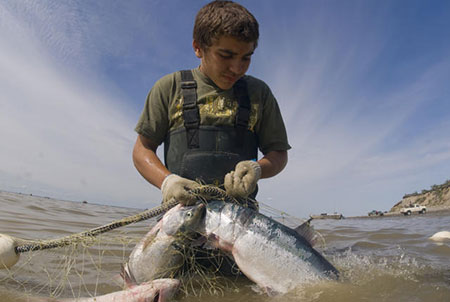 Federal biologists copied Thompson’s idea and created statistical areas in Southeast, Prince William Sound, and Kodiak. These nascent areas were complicated, reused the same numbers, and applied only to herring. These early statistical efforts ground to a halt when World War II broke out in 1941. As the world returned to normal, the matter of counting fish soon came back to surface.

In 1950 the U.S. Fish and Wildlife Service cre­ated a new statistical unit and carved up the Alaska coast into statistical areas identified by three-digit codes, later expanded to five digits to better subdivide areas. Learning from past mistakes, statistical areas were given unique numbers and weren’t consecutive, leaving room for change. This general system remains in place today.

An unrelated event would also shape statistical areas. After the war, the U.S. wanted to restore food security for Japan. The result was the International North Pacific Fisheries Convention (INPFC) signed in 1952. The treaty allowed Japan to fish for salmon in the Bering Sea. Harvests grew to tens of millions of salmon annually, many of Alaska origin.

Controversial to Alaskans, the State Department said good relations with Japan were more important than fish. But they agreed about the importance of good catch accounting. As a result, the INPFC created new statistical areas on the high seas: a grid system that was geo-referenced with areas identified by latitude and longitude. These blocks started in the western Aleutians and were later applied throughout the Bering Sea and Gulf of Alaska. Combined with tagging data, they could estimate impacts on Alaska salmon. It was a new way to look at fish statistics.

Back at home, motivated in part by fisheries issues, Alaska gained statehood in 1959. This meant that Alas­kans had control over their fisheries. The state created its own statistical unit. The young Department of Fish and Game boasted of skilled keypunch operators who processed 1.5 million IBM cards every year and could “provide answers in minutes, instead of months.” 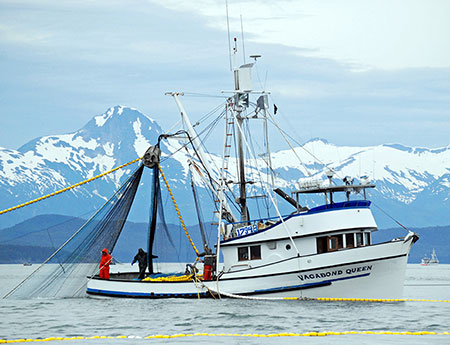 While salmon dominated the harvest, the king crab boom near Kodiak in the early 1960s brought a new problem. The state’s first crab biologist, Guy Powell, argued that stat areas for salmon didn’t work for shellfish. He pro­posed new areas that followed the seafloor. He drew bathymetric stat areas along lines of 50, 100, and 500 fathoms, and even deeper.

Not everybody liked these contoured areas. Bathymetry data then was far from perfect. It created some crazy area lines that were hard to follow, even stat areas within stat areas. Some preferred the georeferenced grid used by the INPFC. For a while, the two systems lived side by side, with bathymetric lines fol­lowing the coast and a grid past 1,000 fathoms. But the state grid wasn’t fully georeferenced and wasn’t used by many Alaskans.

Those offshore international waters attracted more atten­tion from foreign distant-water fleets. Alaskans then didn’t care much for groundfish. They liked some sablefish and cod, but most of these species were considered “trash fish.” Alaskans landed just 3.7 million pounds of it in 1976. That same year, Japanese trawlers under the INPFC landed 1.2 million tons of groundfish, almost two and a half billion pounds, mostly pollock.

That year Congress passed the trailblazing Magnuson Stevens Act. The new law pushed our jurisdiction out to 200 nautical miles and claimed right to the fish in those waters. It took more than a decade for our domestic industry to gear up for this massive new fishery. While industry prepared, so did the state. In 1985, ADF&G introduced a new grid system for groundfish and shellfish that was fully georeferenced and created areas that were one-half by one degree. 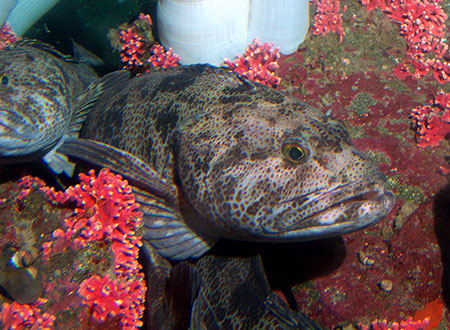 A ling cod. More than six billion pounds of groundfish were caught in Alaska waters in 2015.

Keeping track of all these fish remains a challenge. Over the years, the state has revised and fine-tuned these statisti­cal areas to better manage fisheries. We added special harvest areas, terminal harvest areas, areas for set gillnet catches. Unfortunately, not all these changes are well documented.

A federal grant under the Saltonstall-Kennedy program is allowing the state to trace this histori­cal record so we have a more accurate understanding where Alaska’s fish are landed. Under the direction of IT manager Kathy Jones and Jennifer Shriver, and Geographic Information System (GIS) specialist Sabri­na Larsen, the team is reconstructing these changes, and rebuilding the record of how we counted Alaska’s fish.

Better documentation of this history and future changes will help us un­derstand where we catch our 6 billion pounds of seafood each year so Alaska can continue to manage our abundant fishery resources sustain­ably.

A version of this article originally appeared in OceanAK, a quarterly newsletter of Fish and Game’s Division of Commercial Fisheries Information Technology department.

Bob King works as a research analyst with Fish and Game’s statistical area team and is author of Sustaining Alaska’s Fisheries: Fifty Years of Statehood.