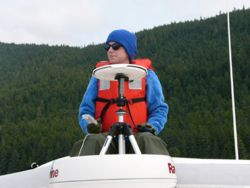 Peering through binoculars, I watched as scores of marbled murrelets streamed out of Snettisham Inlet, 30 miles south of Juneau.

In mid-July I joined Alaska Department of Fish and Game biologist Matt Kirchhoff and four university interns to conduct a day-long survey of murrelets near the inlet’s mouth. Kirchhoff had been running boat-based transects in Stephens Passage for several weeks and had observed large murrelet concentrations. Snettisham seemed to be a hot spot and Kirchhoff was eager to return and gather additional population information. Rotating every hour, we worked in pairs, recording behavioral observations and counting the birds as they flew between the shoreline and the boat.

During the observation period we counted more than eight thousand murrelets. These counts are not indicative of the total population of murrelets in the area, because each bird may make two or more flights between foraging areas outside the inlet’s mouth to (presumably) nesting sites in old-growth forests along Snettisham Inlet. However, the count did suggest that a substantial number of murrelets concentrate in the area during this period of the nesting season. The data that we gathered was used by two of the interns for their respective research projects.

Kira Pontius and Jennifer Carroll were student interns selected from a competitive pool of applicants to conduct murrelet research with Kirchhoff. Both Carroll and Pontius spent the summer in Juneau participating in the “Research Experiences for Undergraduates” (REU) Program, offered through the University of Alaska Southeast (UAS) with funding from the National Science Foundation (NSF). More than 130 students sought the eight positions offered by UAS.

Brendan Kelly, dean of arts and sciences at the University of Alaska and a marine biology professor, invited Kirchhoff to serve as a mentor for the REU program. Kelly has co-coordinated the program with UAS colleague Beth Mathews for the past five years. Kelly had worked with Kirchhoff in the past and knew that he would be a positive role model for the participating undergraduates. Kirchhoff, the only agency biologist working as a mentor for the program this year, said it was well worth the time and energy it took to mentor students in this type of program. 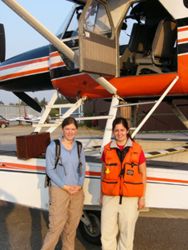 Kira Pontius and Jennifer Carroll, REU intern, getting ready to go out on Aerial Survey.

“The REU program cultivates future leaders in scientific research," he said. "The interns were excellent and I also enjoyed the atmosphere, interacting with the other students and the university faculty.”

Kelly concurs and adds, “There are many studies that show students’ success as research scientists is tied to the relationships developed with faculty/agency mentors.” He added that these students are more likely to stay in science and go on to pursue science-related careers.

When I asked interns Pontius and Carroll if their summer experience enhanced their interest in wildlife research they responded with a resounding, “DEFINITELY!” Pontius, a senior at Ohio State and Carroll, a senior at Michigan State, both wanted to come to Alaska. Both were interested in getting experience with longer research projects. This program gave them not only field experience, but involvement in all aspects of the study. The students designed their individual projects, prepared a proposal, collected the data, performed analysis, interpreted the results and prepared oral presentations.

Kirchhoff had several murrelet projects in mind when planning his field season, but taking his mentoring role seriously, he wanted to give the students an opportunity to design their own projects. “I wanted the skills that they learned this summer to translate to future wildlife work," Kirchhoff said.

Pontius and Carrol embraced the opportunity and were appreciative of the support and guidance they received from Kirchhoff and other ADFG staff while developing their projects.

For both students, the most challenging aspect of their work was determining what could realistically be accomplished given their ten-week timeframe. When asked about the high points of their projects, Pontius said, “I really liked getting all of the data entered and realizing how much that I could do with statistics to analyze the material.” Carroll added, “It was also great to be doing research surrounded by the incredible scenery of Southeast Alaska. 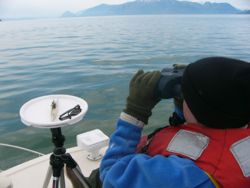 Kira Pontius, using binoculars to spot murrelets at the mouth of Snittisham Inlet.

Kirchhoff points out the importance of studying marbled murrelets in Southeast Alaska. “They are a threatened bird in the Pacific Northwest and California, where the birds are struggling to adapt to a fragmented, human-modified landscape. We have an opportunity in Southeast Alaska to study their ecology in more natural setting, providing an important comparison with conditions further south.” Murrelets are relatively abundant in Southeast Alaska, making them an easy species to study. Their link to the forest is also compelling. Marbled murrelets are the only seabirds that nest in forests, preferring the tops of old-growth trees that provide large, mossy platforms.

“One of the things that really interests me is the large scale movements of these birds within Southeast Alaska," Kirchhoff said. "Two weeks ago there were thousands of murrelets in Stephens Passage; right now there are very few. Where are they now?” He emphasized the need to conduct repeated surveys at multiple locations each year to more accurately track population trends and spatial distribution over time.

Kirchhoff expects that he will seek an REU intern for next year’s field season. The University has one more year of funding for the REU program here in Southeast and expects to seek additional funding to carry this successful model into the future. Kira Pontius and Jennifer Carroll may one day return to Alaska as research biologists with the Alaska Department of Fish and Game or the University of Alaska, thanks in part to the REU program, mentors like Kirchhoff and the natural beauty of the wilds of Southeast Alaska.