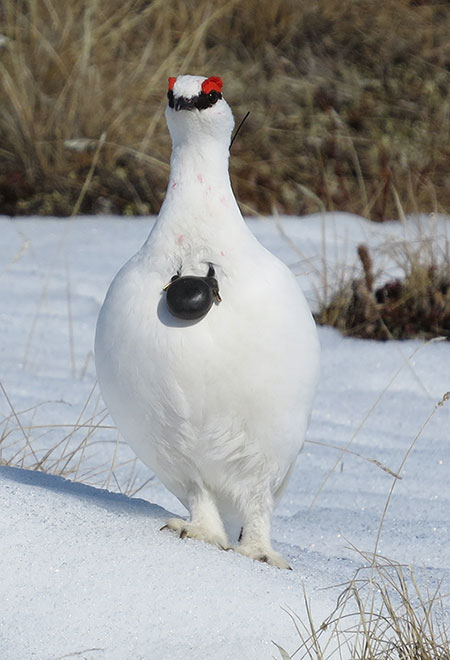 Most Alaskans are familiar with ptarmigan and many have enjoyed their “clowns of the tundra” antics in the spring. These birds may be well-known, but they are poorly understood.

Learning about the biological world through the scientific method requires patience and time. However, if planned appropriately from the start, the process can yield surprising nuggets of knowledge. This is particularly true in areas where no strong prior understanding existed. Now let’s not kid ourselves, studying rock ptarmigan isn’t curing cancer, but there is still much to be learned about this popular Alaskan bird.

That is exactly why in the spring of 2013 the ADF&G Small Game Program (SGP) began capturing and collaring rock ptarmigan as part of a new study in Game Management Unit (Unit ) 13B. The area is about 120 miles north of Anchorage, between Paxson and the upper Susitna River along the Denali Highway. During the winter of 2009 the Board of Game shortened the ptarmigan hunting season in Unit 13B due in part to reduced spring breeding abundance of rock ptarmigan. However, until 2013, there had never been any attempt to evaluate the response of the rock ptarmigan population in Unit 13B to that regulatory change, or even to evaluate the value of the roadside spring surveys used to assess spring breeding abundance. One of the big questions was whether rock ptarmigan breeding in roadless areas (more than five to 10 miles distant from roads) replace birds being harvested adjacent to roadways? Therefore in spring 2013 the SPG began a four-year study to try and evaluate rock ptarmigan movement, mortality, and to attempt to estimate reproductive rates. 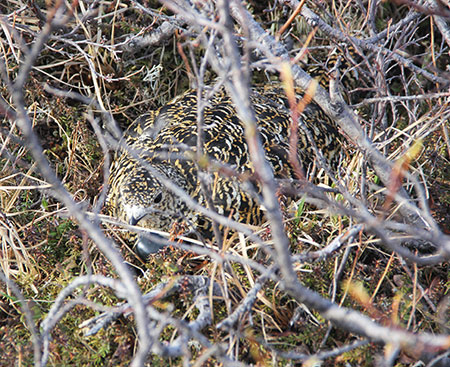 A well-camoflauged hen ptarmigan on a nest. She is also equipped with a radio transmitter. Rick Merizon photo.

One of the first challenges the SGP faced was developing adequate capture techniques that would allow the handling and application of VHF radio collars, the device that would enable us to track movement and document mortality. Rock ptarmigan were captured using one of two methods. First, a noose carpet, a 1- by 3-foot piece of poultry fencing with 50 to 60 monofilament nooses tied to the wires. The noose carpets were laid flat on the ground adjacent to a mounted ptarmigan decoy. The highly territorial and defensive males were lured to the trap and their toes become ensnared when they attempted to approach and fight the “intruder.” The second method was a handheld net gun. This gun was shoulder fired at about 20-30 feet from the bird and deployed a 10-foot by 10-foot net that entangles the bird.

Between spring 2013 and fall 2016, SGP staff captured and radio collared 102 rock ptarmigan throughout Unit 13B. Capturing rock ptarmigan proved to be more challenging than other species (such as their more abundant and generally less cautious cousins, the willow ptarmigan). Both males and females as well as hatch year juveniles and adults were fitted with a necklace collar (with a battery lasting 12 months), weighed, and released. In the following weeks and months collared individuals were relocated using both ground and aerial radio telemetry. 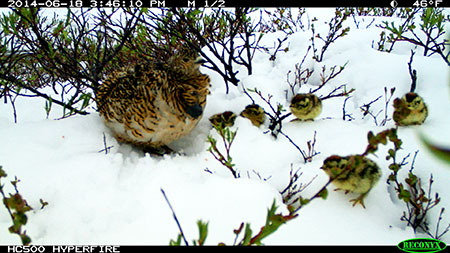 A trail camera-captured image of a hen ptarmigan and chicks after a late spring snowstorm. Storms like this are a source of chick mortality.

The first part of the study planned to document nesting behavior, hatch date, and sources of nest mortality using motion-sensitive cameras. We photo documented far more than we bargained for including a brown bear stepping over a nest, a caribou licking the camera, marauding arctic ground squirrels, and 18 inches of snow that forced many hens to abandon her nests. However, cameras were also successful in documenting hen behavior while incubating and most importantly hatch date and clutch size.

Throughout the remainder of the year aerial telemetry survey flights were completed bi-monthly. These flights were very successful in documenting the wide-ranging movements of the radio collared rock ptarmigan. Males tended to stay relatively close to their spring breeding territories throughout the fall and winter. They exhibited very high breeding site fidelity and generally by mid-April were actively displaying back on their territories from the previous year. Juvenile males tended to stay close to dad and often were able to secure their own territory the next spring within 1-2 miles of him. However, adult and juvenile females tended to range much further away from the previous summers brood rearing locations. Some females moved around a 300km2 area, including individual movements between surveys up to 80 km away from the previous location. Yet, like males, adult females also had very high breeding site fidelity and in many locations bred with the same male or adjacent male from the previous year. 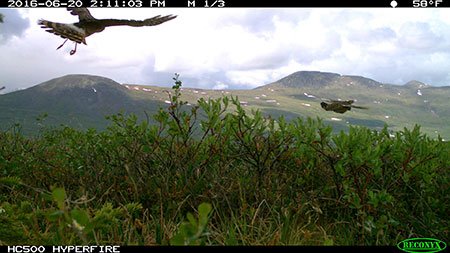 A motion-sensitive trail camera captured this image of a hawk pursuing a rock ptarmigan.

Turns out lots of things like to chase, attack, harass, and eat rock ptarmigan. Without much surprise, wildlife including hawks, falcons, ravens, long-tailed jaegers, fox, coyote, and even arctic ground squirrels caused the greatest source of mortality throughout the year. However, between August and October human harvest proved to be a significant source of mortality particularly for birds that reside adjacent to the roadways.

So what does all of this mean? Well this study has been the first in over 40 years to document rock ptarmigan movement, mortality, and breeding behavior in Alaska. Within Unit 13B male rock ptarmigan residing near roadways are likely to be much more vulnerable to human harvest than their counterparts that breed five to 10 miles distant from roadways, based on the radio telemetry surveys. Although sample size is low it does appear that there is little breeding interchange between areas 10 to 20 miles distant. Therefore, birds residing more than 10 miles from the road are not likely to replace birds in areas with higher human harvest pressure mostly near roadways. The study has also documented high rates of annual mortality suffered mostly by juveniles within the first five to six months of life; this is caused by climate, predation, human harvest among other sources. However a rock ptarmigan hits its “golden years” at 3-4 years of age. 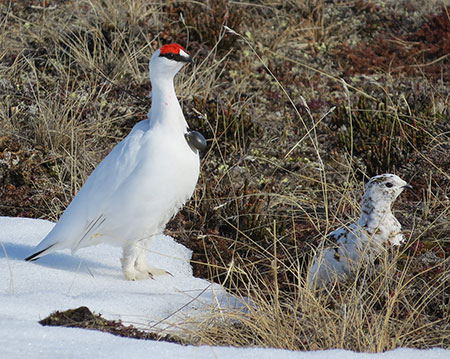 This study is currently following the final cohort of radio collared birds through May 2017; however other similar ptarmigan research projects are also underway or being completed this year. A second rock ptarmigan study is currently underway near Eagle Summit on the Steese Highway northeast of Fairbanks. A three-year willow ptarmigan movement study funded through the Alaska Energy Authority has also recently been completed. The results of that study share many similarities with this rock ptarmigan study; the results of which will be available in 2017.

The SGP will continue learning more about these famous and popular little birds of our Alaskan alpine and tundra.

For more on ptarmigan, rock ptarmigan capture videos, or other small game species in Alaska, see the Small Game website.