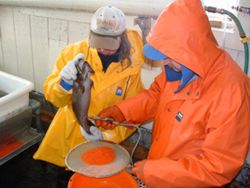 Alaska hatcheries have been producing and stocking fish for sport fishing since the 1950s. Early stocking efforts involved thousands of fish and focused on a small geographic area. Today, the Alaska Department of Fish and Game Division of Sport Fish hatchery program stocks millions of fish into hundreds of lakes and streams throughout the state. Salmon, trout, char and grayling are stocked in Southcentral and Interior Alaska, and small numbers of rainbow trout eggs and grayling fry are supplied to Southeast Alaska stocking projects. These hatchery programs contribute significantly to sport fishing opportunities in Alaska and provide an invaluable management tool for protecting wild fish stocks from over harvest. But today, faced with failing heat resources and aging infrastructure, the question is “How will the program survive?”

With the closure of the Big Lake, Fire Lake and Clear Air Station facilities, all sport fish hatchery production for Southcentral and Interior Alaska was consolidated into the Elmendorf and Fort Richardson hatcheries. Both hatcheries evolved from small military facilities that produced rainbow trout to create fishing opportunities for military personnel stationed on the bases.

In the early 1970s the Division of Sport Fish took over operations of both hatcheries and greatly increased their rearing capacity through the installation of cement raceways. At an annual cost of approximately $2.3 million, about 10 percent of the Division of Sport Fish budget, these two hatcheries now produce and stock over four million fish (chinook, coho, rainbow trout, arctic char, and arctic grayling) annually for the benefit and enjoyment of sport anglers across much of Alaska. The annual economic benefit from this stocking activity is conservatively estimated at more than $30 million (Northern Economics, 2004).

Fish production at the Fort Richardson and Elmendorf hatcheries is dependent on surface and ground water supplies as well as waste heat recovered from nearby military power plants. The heat is critical, because water temperature profoundly affects the growth rate of these fish. The fish grow optimally in water at about 56 degrees. Without heating, water at the Elmendorf hatchery ranges from 32.5 degrees in winter to almost 60 degrees in summer. Ground water supplies the Fort Richardson hatchery and averages about 38 degrees in winter and 47 degrees in summer. Without warming the water, fish production would be substantially reduced. 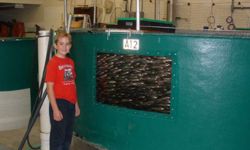 These water and heat resources are now disappearing. When the Fort Richardson and Elmendorf hatcheries were first built they were intended to produce rainbow trout and salmon smolt only. Today they produce chinook salmon, coho salmon, rainbow trout, arctic char and arctic grayling. Both hatcheries are dependent on heat supplied by military power plants to achieve complex production goals. In March of 2004 the Fort Richardson Central Heating and Power Plant ceased operation.

The Elmendorf Air Force base power plant is expected to close by October 2005. With the loss of heat, the Sport Fish hatcheries will not be able to meet production goals beginning in the spring of 2006. What might be missing in 2006? Without additional heat there will be no catchable sized fish to stock. This would include the catchable rainbow trout and landlocked chinook normally put into high use lakes in Anchorage, Fairbanks, Mat/Su, and Upper Kenai.

Currently these facilities are:
1. Water limited.
2. Heat limited.
3. Space limited.
4. Out of compliance with a wide variety of state regulations due to poor facility design.
5. Unable to allow for adequate public visitation or educational opportunities, because the facilities were never designed to provide this benefit.
6. Rearing fish in outdoor raceways exposing them to disease and predation leading to a greater risk of mortality.
7. Not efficiently designed, requiring increased manpower.
8. More than 20 years old and in need of significant repairs and renovations to continue safe and efficient operation.

The State of Alaska is not alone in these issues. Almost all of the lower 48 states are facing similar challenges to their sport fish hatchery programs.

Supported by $1.5 million in funding the Sport Fish Division is addressing short- and long-term production issues by:

1. Installing a boiler system at the Fort Richardson hatchery to mitigate the loss of power plant heat and ensure the continued production of all chinook smolt, coho smolt, rainbow trout and char broodstock and rainbow trout, coho and grayling fingerling.
2. Investigating water quality impacts through a pilot hatchery to study the feasibility of constructing a new hatchery in Fairbanks.
3. Initiating a Sport Fish Hatchery Program evaluation to identify the options and cost associated with the construction or reconstruction of hatchery facilities in the Anchorage/MatSu Area. 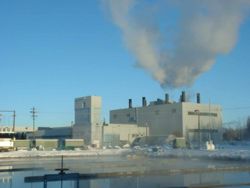 Even if the Clear and Fire Lake hatcheries were still in operation there would not be the resources to safely and effectively meet current stocking needs. It should also be noted that the Clear Lake hatchery was primarily a research facility with little production capacity.

Current stocking activity accounts for about 80% of all Rainbow trout Harvested in the State of Alaska and nearly 20% of all sport harvested chinook salmon in South Central Alaska. During the 2002 Great Alaskan Sportsman’s Show the public was asked to participate in a poll that asked whether the Division should be stocking more or less fish. The overwhelming response was “More Fish”. At the same time, area management biologists were asked if they had enough fish available to meet their management needs. The answer was “No.”

The Division of Sport Fish has instituted changes in hatchery operation and production to maintain hatchery production and address thes eupcoming changes in hatchery water supplies. A comprehensive facility improvement plan and funding are needed to maintain the existing stocking program, and allow for possible future expansion to meet a growing demand for stocked fish. Failing to do so will impact the ability to support the mission of the Division of Sport Fish, to “Protect and improve the state’s recreational fisheries resources.”

To meet future production goals with a safe, dependable and cost effective system, Fish and Game will need to invest tens of millions of dollars into its fish production facilities. It must be shown that hatcheries not only produce fish, but that they provide opportunity for education, information and research. Public visitation can exceed 10,000 visitors a year at the Elmendorf Hatchery alone. With an annual economic benefit in excess of $30,000,000 it seems reasonable that to consider making this investment.