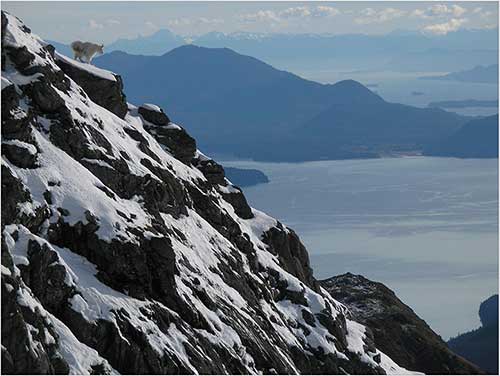 If a family of mountain goats were your neighbors, they’d be the quiet type, the kind that mostly kept to themselves. They might go away on vacation during the Fourth of July, or over the New Year, to avoid all the commotion. Fireworks, for instance, would never be their forte. That’s just the way they are — a wee bit solitary, wary of disturbances and not the overly social type.

Those are all facts ADF&G wildlife biologist Kevin White and research analyst Dave Gregovich know well. A recent study, published this spring after a decade of research, shows mountain goats are not terribly tolerant of human development. Their analysis, recently accepted for publication in the peer reviewed journal Wildlife Biology and entitled, Mountain Goat Resource Selection in Relation to Mining-related Disturbance, examines how industrial development can affect mountain goats’ use of the surrounding habitat. The study found these alpine animals avoided suitable habitat near human development — in this case, the Kensington Mine, north of Juneau.

While their findings don’t come as much of a surprise — researchers have known for decades that mountain goats are picky about human disruption — White and Gregovich found very little variability in the data. That observation was remarkable. Basically, the goats were all largely following the same pattern.

“Typically, especially with animal populations, there is always variation in the data,” White said. “It’s rarely black-and-white. And our models account for that, to filter out the ‘noise,’ if you will.”

So White was somewhat taken aback when the 18 GPS-collared goats were all following the same pattern — choosing winter habitat that was at least mile away or more from the mine. 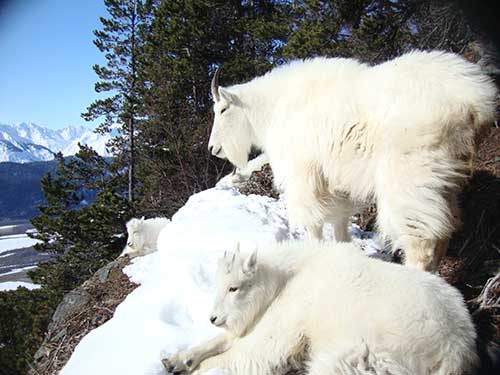 First, White went about the task of picking up where two biologists, Matt Robus and Ben Carney, left off. That pair had set out to study mountain goats in the mid-1990s, in and around the then-proposed Kensington Gold Mine. Their research fizzled, however, when the mine stalled. Things picked back up in the early 2000s when Coeur Alaska, the company behind the mine, filed their finalized mine development plan with the U.S. Forest Service. At the same time, the plan for “The Road” — a highway linking Juneau with the Katzehin Delta, south of Skagway — was moving forward. That renewed interest in understanding how the mine and lower elevation development may affect mountain goats in the area.

Mountain goats rely on different types of habitat during different times of the year, White said. In summer, they head high into the alpine, looking for steep rocky ledges, cliffs and areas with high sun exposure. In the winter, mountain goats move down, he said, sometimes as low as sea level. They’ll winter in the timber, for instance, where the snow pack is less; but step, rugged terrain is still mandatory.

White worked with Gregovich to identify and map areas near the mine that were important habitat for the goats. The pair established two separate resource selection function (RSF) models, and each described how likely an area was to be used by the alpine-loving animals. The models predicted what habitat might be used in the summer, and which areas were likely to be used by the goats in winter.

At a glance, the maps look like a depiction of thermal imaging, with areas of red and orange overlaid on areas mountain goats were most likely to use. Other adjacent areas faded to shades of yellow, blue and white. These areas were meant to predict habitat that would be used less simply because of the geographic, topographic or vegetation resources available. 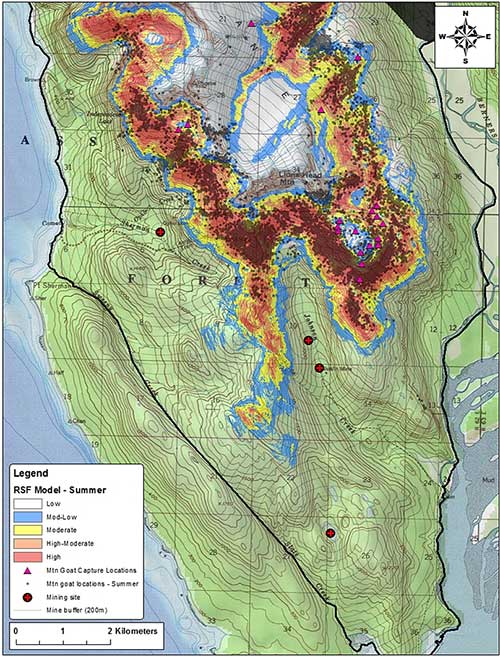 Map depicting mountain goat use of predicted summer habitat in the vicinity of the Kensington Mine, Lynn Canal, Southeast Alaska. Summer mountain goat GPS locations (grey dots) and capture sites (purple triangles) are plotted along with mine activity centers (red crosses) and 200-m concentric buffers (grey lines). RSF model predictions, which describe the relative probability of use, are color-coded based on the quantile distribution of RSF scores.

“These models are defining where the important habitat is during those two seasons,” White said.

Upon closer examination, other symbols are on the map, too. A red plus sign denotes a mining site, fuchsia triangles denote a location where a mountain goat was captured and fitted with a GPS collar, and then there are thousands of grey dots — each dot representing a goat’s location, which was recorded at fixed intervals, generally once every six hours for a two- to three-year time period.

Gregovich said the collar information was key to determining which habitat the animals used. “So now we have a model that essentially describes these functional habitat relationships between mountain goats and how they use the environment,” he said. “And then we can predict — by using GIS mapping software — throughout the whole area, including where the mine is and ask the question, ‘Ok, how much mountain goat habitat, based on this big sample size of animals, would be predicted in and around the mine?’ And then we can conduct an analysis to define where critical habitat might be. The final step involves assessing whether mountain goats are using the critical habitat near the mine, to the same degree as critical habitats distant from the mine.”

Researchers agree that having thorough information is paramount. That includes identifying critical habitat and learning how human development can potentially affect wildlife populations. 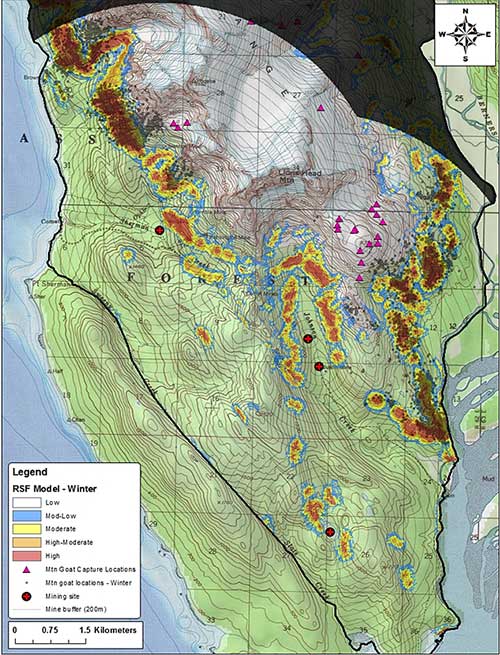 Map depicting mountain goat use of predicted winter habitat in the vicinity of the Kensington Mine, Lynn Canal, Southeast Alaska. Winter mountain goat GPS locations (grey dots) and capture sites (purple triangles) are plotted along with mine activity centers (red crosses) and 200 m concentric buffers (grey lines). RSF model predictions, which describe the relative probability of use, are color-coded based on the quantile distribution of RSF scores.

One thing is for sure, goats don’t like going close to human disturbances. Fortunately, summer habitat is generally further away from the mine, as compared to winter. In winter the picture becomes a bit more concerning because winter habitat is at lower elevation and, by definition, closer to the mine.

“And so you have this scenario, as an example,” White said, “where animals might summer up on top of the ridge, near Lions Head (Mountain), and then in the winter time those same goats move down to lower elevations. So they have a decision to make: Do they move down into lower elevation habitats in the Johnson Creek bowl where the mine is? Or, do they move to the opposite side of the ridge, over by the Berners River?”

The problem in winter is that there is less available habitat simply because the snowpack moves down the mountains, White said. The research indicated “mountain goats appear to be less tolerant of using habitats within the 1,800 meter distance threshold during winter than in summer.” A similar study done in 2015 on mountain goats in Alberta, Canada documented the same pattern — goats displayed an increased avoidance of habitats tied to human disturbance.

Why is this? White said it’s because it just costs the goat more energy to move in winter. With colder weather, fewer food sources and deeper snow, the costs of moving away from any turmoil might be too great. Hence, the goats choose areas where disturbances are less of a factor.

In the area of the Kensington Mine, White’s study found there’s simply less habitat available to goats in the winter than in the summer — 1.7 times less abundant to be exact. Furthermore, mining activity happens largely at lower elevations. Similarly, the study found that 42 percent of overall winter habitat was within the mile-wide buffer around the mine, and not being used by mountain goats. 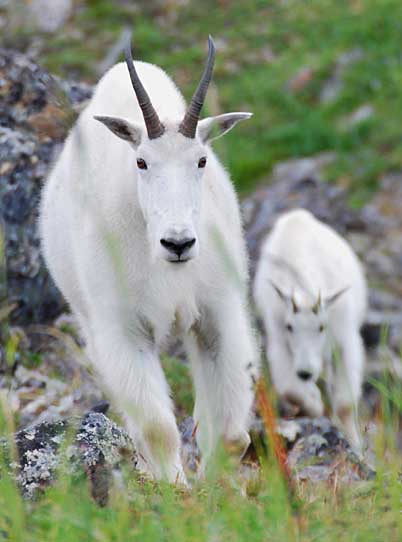 White said he thinks it will be important to continue to monitor goats in the area from Berners Bay to the Katzehin Delta, particularly to observe how the goats near the mine behave compared to those unaffected by all the hustle and bustle. He also wants to see if goats become accustomed to their noisy neighbors, or if “wintering habitats are re-colonized once mining activity ceases.”

A manuscript based on the analyses has just been accepted for publication in the peer-reviewed journal Wildlife Biology.

Regardless of the outcomes of studies such as this one, White strongly believes having more information will only make for better wildlife management strategies now and in the future.

Read the full study, Mountain Goat Resource Selection in Relation to Mining-related Disturbance, near the Kensington Mine, Southeast Alaska

Abby Lowell is a contributing writer to Alaska Fish and Wildlife News and serves as an education and outreach specialist with the Alaska Department of Fish and Game’s Division of Wildlife Conservation. She is based in Juneau.