Chums on the Fly 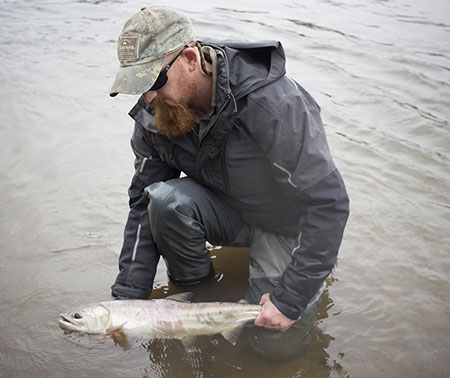 The author releases a salmon

The brawny fish turned slightly against my grip, laying itself side up on the surface of the water as a faint beam of light struck the subtle figures of color running vertical across the plane of scale and fin. She didn’t come easy. These beautiful fish seldom do. I had to fight for her. Tighten the drag on my fly reel down as she bulleted through the force of a descending current.

I watched her strike. Bolt from the shadow of a mid-stream riffle, following the gaudy path of the fly at the end of my line. She hit hard. Nearly pulled the rod from my grasp. With a quick hook set, she turned and did what these fish do – run.

Too often, when I hear the word “chum” used by anglers along the riverbank, it’s just another four-letter-word. Some anglers speak of this fish as if it were the cockroach of the river. A waste of time. A nuisance fish. Dog food.

Perhaps the lack of respect for this fish is attributed to the fact that the chum is not prized for its edibility. Once chums enter freshwater to begin their migration to the spawning area, they turn rather quickly from steel chrome and develop the tell-tale calico bands along each side of their body. Their flesh softens, ostensibly making them unpalatable. I’ve only eaten smoked chum. It was delicious. Very mild. And I have heard from those who have eaten chums caught in saltwater that they are excellent table fare.

Chums are voracious in freshwater. I often find chums in rivers holding in side sloughs, or mid-stream adjacent to areas faster flowing water. Information on the Alaska Department of Fish and Game website indicates chum salmon are the most widely distributed Pacific salmon in Alaska. “They (chums) range throughout Alaska, but are scarce north of Kotzebue Sound. Elsewhere they are found along the east and west coasts of the North Pacific Ocean north of northern California (Sacramento River) and Kyushu, Japan, and along the Arctic Ocean coast east to the Mackenzie and Anderson rivers in Canada and west to the Lena River in Russia. While at sea, most of Alaska’s chum salmon remain in the eastern Chukchi and Bering seas and the Gulf of Alaska.” 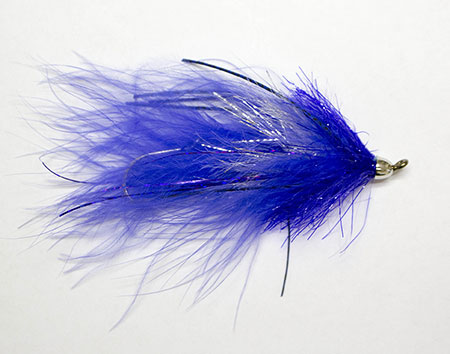 In Southcentral, chums tend to return to their natal streams during the fall months – August through October. I have found good concentrations of chum salmon in road-accessible tributaries of the Susitna River. I fish for chums near the mouths of Willow Creek and Montana Creek. Often, while targeting these fish, I encounter other Pacific salmon species like pinks and silvers present in the same areas. It’s nice to have variety.

While I have found that chums aren’t too picky when it comes to fly patterns, I have found that certain sizes of flies and color combinations work better than others. When it comes to tying fly patterns, I’m not one to get held up on specific recipes for any one pattern. I tend to use common materials and fly tying methods to develop patterns I believe will function well in the water. 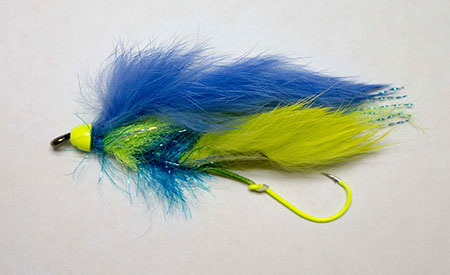 For salmon (excluding sockeye), I tend to tie larger style, articulated flies with a balanced combination of flash and feather or fur. The fly pattern I tie doesn’t really have a name. I’d say it’s modeled after the Intruder fly. I find a lot of flexibility in this style of fly. My preferred colors are purple, pink, chartreuse and white. The availability of fly tying materials seems to be endless. However, the majority of my salmon flies carry some combination of marabou and rabbit zonker strips. I use silver, chartreuse or blue tinsel or crystal chenille to add flash to the body of the fly. Sometimes, I’ll incorporate a pair of rubber legs to give the fly more motion and attraction in the water. My salmon flies aren’t really tied to mimic any natural food source for the fish; rather I build flies with the idea of color and motion in the water. I want the fly to elicit strikes of aggression.

Typically, when tying an articulated fly, I leave room for only one single trailing hook. I use 1/0 or 2/0 hooks for the trailer. Gamakatsu manufactures hooks coated with a colored material. I prefer their chartreuse or pink hooks. Matches the fly. I’ll use a size 2 or 4 hook to build the front of the fly and once the pattern is complete, I simply cut the hook along the shaft to remove the bend and point. I rarely attach any material to the trailing hook. And while I prefer using wire to attach the trailing hook to the shaft of the front hook, I also use 30 pound fly line backing. Admittedly, I won’t spend a lot of time perfecting my flies. Many of the rivers I fish are full of snags and it’s not uncommon for me to lose a half-dozen flies –either to snags or to bigger fish. 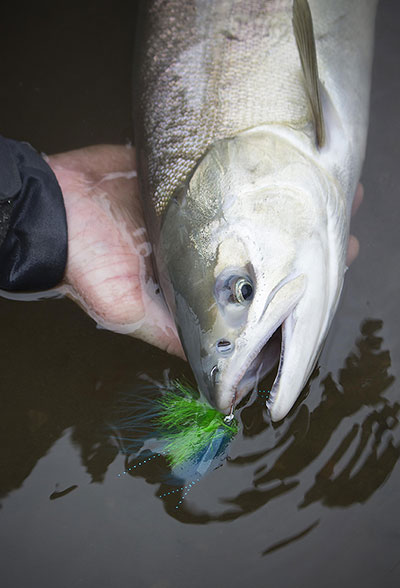 The way I fish these flies depends on the water. If I’m casting into faster current, I add a few split shot weights to get the fly down quickly. I’ve hooked fish dead-drifting these flies, but I’ve found swinging them across the current is more effective. If the fly swings from faster current into slower moving water, I’ll allow the fly to sink a bit in the slow water and strip it back.