Who We Are
Our Hunting Tradition 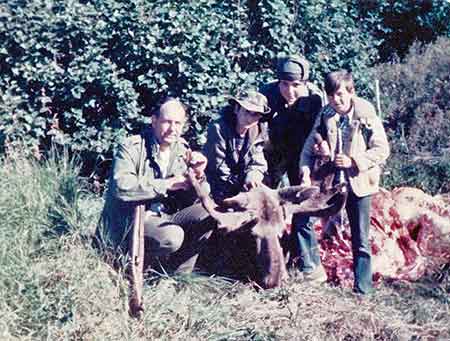 Alaska hunters, 1970. Young Ken Marsh in the bush hat, with his uncle Norwood Marsh to the left and cousins Pete Marsh and Rodney Marsh to the right; with a moose taken near the Denali Highway.

The photograph was, at first glance, startling. It featured bright, sticky blood smeared on the brown cheeks and forehead of an 8- or 9-year-old boy. A rack of reindeer antlers, fuzzy with summer velvet, rested on the tundra nearby while in the background a treeless horizon that could have been the Oshetna country, Anaktuvuk Pass, or the hills surrounding the Kobuk River met a cold, white sky.

But this wasn’t Alaska. Looking on was a group of leather-faced men with wrinkles flowing in wakes from the corners of their eyes. The men, all Natives of Russia’s Kamchatka Peninsula according to the accompanying magazine story, were smiling. A caption indicated the dabbing of blood was a cultural rite, a baptism that honored a young Kamchatka Native boy’s bond to the tundra, the reindeer and the circular path that brings everything together.

In the distinctive way photographs have of stopping time and distilling emotion, I’m envisioning the image of another young boy, standing waif-like in torn pants on a Nelchina River gravel bar, gripping a small rack of velvet-covered caribou antlers. Once tacked to a wall above my office desk, but long since lost, the photograph was a monochrome, relic of an era. Still, it provided the necessary detail – willows in the background, a ribbon of river running through the upper quarter. Your heart filled in the dimensional gaps: color, temperature, the gurgling stream, etc. 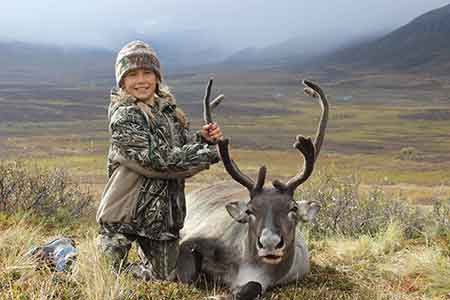 A young hunter continues a family tradition. Jordan Strausbaugh, 10, with a caribou she harvested in GMU 13 on a family hunting trip. She helped butcher and process the caribou.

Taken on different continents more than a quarter century apart, the two photographs overlapped in an impressionistic sort of way. Rather than two boys of different cultures, they revealed children bound by tradition. You could look into the faces of both boys and sense similar auras of security, innocence, warmth. The presence of blood, the racks, the deaths of beasts, were outshone by a radiance that declared: This is who we are.

I’m marching back in time, my feet crunching into the pregnant gravel of a Nelchina River bar. Beside my small, pigeon-toed boot prints are the tracks of caribou (each cloven impression a neatly broken heart), accompanied by the larger, longer, more linear tread of moose; the padded, canine signature of wolves; and in the mud at the water’s edge, the clawed, helter-skelter meandering of a grizzly.

From the time I was 5 years old I followed my father, uncle and a group of close friends into the Nelchina wilderness each August to hunt caribou. Not unlike the Kamchatka people, we hunted for meat to feed our families. Much of what is important to me today is rooted in that place and to those times, where willows glowed in yellow bursts, and autumn air hung humid and cold, fragrant with the river’s scent (a sweet, earthy blend of wild grasses and damp soil). The country was a place where passions bloomed. 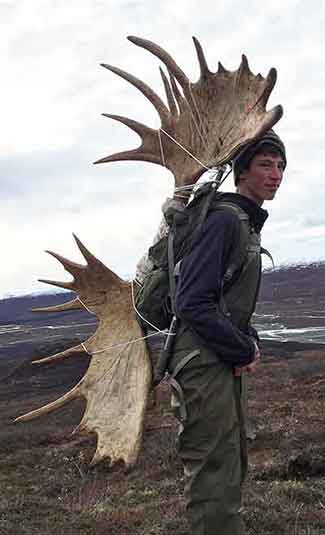 Brent Edmondson, 14, packs out the antlers of his first moose. Continuing the tradition of three generations of moose hunting in Alaska. Photo by Matt Edmondson.

In my earlier years I served a kind of apprenticeship, providing camp meat by catching graying with a bamboo fly rod featuring a wildly flared tip. Later I graduated on to a .410 shotgun and white-winged ptarmigan – tundra chickens. Ultimately, I became a big-game hunter.

Your mind is a sponge when you’re 6, 8, 12 years old. You remember things that adults might think trivial. But symbolically, the livery flavor of ptarmigan fried in flour and butter or the image of a ridgeline bristling with a forest of silhouetted antlers become a part of you.

Along the way you learn things only hunters know that can’t be explained, but must be felt. Ancient, primal emotions intrinsic to men and wolves develop and grow tangible. You discover the peerless freedom of the hunt surging in the grip of wood and cold steel or howling in the wind of a high pass. You’re introduced to basic realities of success and failure, life and death. 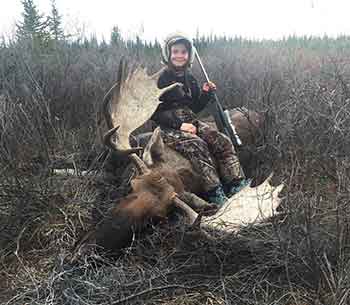 10-year-old Samantha Mead with her first big game animal. Samantha and her dad Travis Mead were hunting in unit 20E when she took this bull with her 7mm-08. Samantha had been calling in the meadow every morning and evening for five days prior to him showing up. During this hunt she really learned that patience and persistence pays off.

With time, the elemental lessons of hunting grow more complex. You discover that hunting is as convoluted as humanity itself: There is subsistence, there is sport, and there is greed. Somewhere within this tangle of character and natural instinct, where innocence and knowledge mingle, we define ourselves – as a species and as individuals.

Most of my time these days is spent far from the Nelchina River country and its caribou. Even so, it’s encouraging to know that the land and its animals live on and that hunting there remains a priceless, ageless option. That’s because hunting is a birthright, something that can never really be taken away. The Kamchatka people would agree, as would their Alaska Native cousins, my Anglo ancestors and, if they could speak, so would wolves.

Back on the Nelchina River, my uncle showed me how to fashion a whistle by cutting a willow with a jack knife and carefully slipping the bark. Another man taught me how to skin a caribou without slashing my knuckles by gripping the hide like so. And when, at age 11, I killed my first caribou, the men smiled and patted my shoulders and generally treated me as an equal. I’ve since known no greater honor. 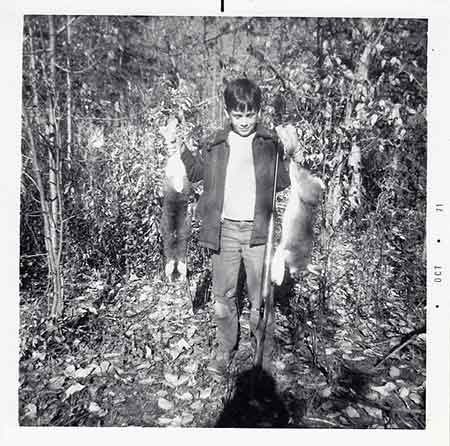 Today I drive an automobile that burns gasoline and live in a house that has permanently displaced wildlife habitat. Indeed, if you traced everything I do, you would find my existence somehow comes at the expense of other creatures. So whether or not I hunt this fall, I still have blood on my hands — and coursing through my heart. We all do.

Ken Marsh is a longtime Alaskan and public information officer for the Division of Wildlife Conservation in Anchorage. This piece, adapted from an essay he wrote nearly 20 years ago, remains as pertinent today as ever.