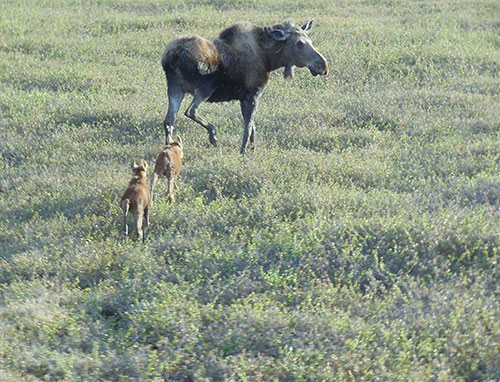 A cow moose with twin calves shortly before the calves were radiocollared.

I moved as quickly as I could towards the sound of the helicopter hovering above the cottonwoods. I stumbled through the thick understory, scanning ahead for any movement. As the helicopter came into view through the tree tops, I knew I was closing in on my quarry, and things were about to get intense. The helicopter was hovering high over a day-old moose calf and her highly protective mother. Common sense and wisdom dictate that you should avoid getting between a cow moose and her newborn offspring. However, in this case, that was the goal.

I was on the west side of Cook Inlet, conducting a study to evaluate moose calf survival and determine cause of death for calves from birth to one month of age. Preceding studies of the area’s moose population indicated high calf productivity in spring, but low calf survival from birth to fall. To evaluate potential management options for increasing fall calf recruitment, area managers needed to know the factors contributing to the observed low summer survival of calves. And the best available method for collecting such information was by radiocollaring newborn calves.

Radiocollaring is one method of tagging big game animals such as moose and caribou for individual identification, and provides insight not possible by even the most intensive aerial observation. By handling moose or caribou calves, typically for about 30 seconds, sex and weight can be determined and body condition evaluated. The small transmitter, attached to an elastic neck collar designed to expand with growth and ultimately fall off, emits a unique VHF signal for tracking. A sensor in the collar changes the pulse rate of the VHF signal if the collar is motionless for more than an hour. When this occurs, mortality is presumed and the collar can be retrieved and the site investigated for evidence of what led to that particular calf’s fate.

But first, calves have to be caught. I’d caught and collared newborn caribou calves and the process for catching moose calves is similar. Fixed-wing aircraft search for and locate newborn (typically one-to-three day old) calves and relay the coordinates to the helicopter capture crew. The helicopter locates the cow/calf pair and drops a crewmember close by who then catches the calf on foot. Caribou cows generally run a short distance then turn and watch the process, sometimes from only feet away. A smaller percentage of caribou cows put up a more aggressive defense of their calf. Usually that entails cows rearing up on hind legs and striking out at their pursuer with front hooves, but I’ve also been charged by cows that were leading with antlers on lowered heads. A few minor scrapes and bruises from such instances notwithstanding, I don’t consider that duty considerably hazardous. For the most part, catching caribou calves is only difficult when you trip on a tussock and hit the tundra. But scooping up a moose calf in the presence of its large and annoyed mother can get a bit more exciting. 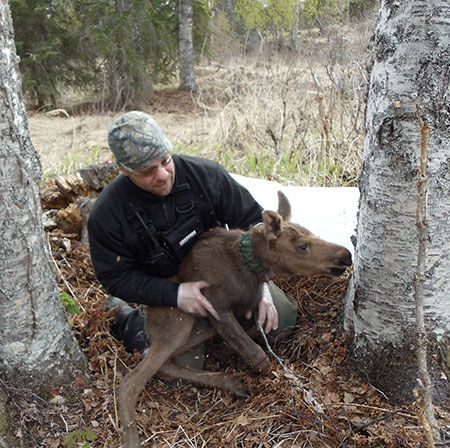 The author with a moose calf. Biologists spend less than a minute processing the calf and equipping it with a radiocollar. If the radiocollar sends a signal indicating the calf has died, biologists can locate the collar and investigate the scene, and often determine the cause of death.

We were a couple days into the moose calf study and had captured and collared a handful of calves without much incident. The initial captures were mostly in open areas (forest meadows, tundra, and river gravel bars) where the helicopter could drop off the calf catchers close to the moose and remain nearby throughout the capture process. The proximity of the helicopter was an important factor in keeping the cow separate from, and not focused on, the ground crew. On the morning of the third day, we were relayed the coordinates of a cow and newborn calf in the thick timber. Capturing this calf would be a little different…

Flying over the coordinates, we spotted the cow and calf and searched for the nearest clearing to set down. My partner and I were dropped off on a dry creek bed a couple hundred yards away from the moose. The helicopter returned to hover high over the cow/calf pair, and we set a course into the timber. 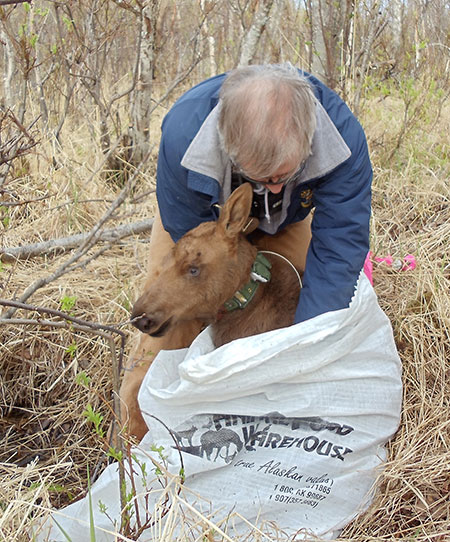 Shortly after catching sight of the helicopter above the canopy, I stepped around a large cottonwood trunk and into the pilot’s view. The VHF radio strapped to my chest erupted, “Go, go, go, she’s straight ahead of you!” I began sprinting forward, closing the distance while straining to spot the cow. The first glimpse of the cow was when she stood up about 25 yards away and stared in my direction. Focusing on the ground below her for a calf, I charged hard past the last tree remaining between us. At 15 yards, the wobbly calf stood up…and the cow didn’t budge. At this distance, I was hoping to see just the back end of the cow as she turned and moved away from the ruckus. Instead, she called my bluff. Her hackles raised and ears lowered, she charged straight for me. In an instant, realizing I could not outrun her to reach any protective cover, I decided I’d stand my ground and dodge right or left at the last second. Not a great plan, but the best I could come up with on short notice. She closed the distance in a blur, then time slowed. The last thing I saw was a close-up of her left front hoof as she kicked straight at me. Luckily I had initiated my dodge to the right just in time and avoided the hoof. I felt a fleeting sense of relief that my juke had worked, but it quickly vaporized when I set my foot down into a muck hole and immediately face-planted. Expecting an imminent hoof-delivered deep tissue massage, I covered the back of my head and neck with my arms. But it never came. I popped up to locate her in time to see her melt into the brush. Behind me, my partner caught up to the calf which we quickly weighed, radiocollared, and released. Then we headed back to the landing zone, comparing the events from our different perspectives.

The subsequent weeks provided many other memories, but most somewhat less exciting. In all, we captured and radiocollared 52 moose calves that spring. The brief capture and handling of the calves was essential for collecting detailed information and helped provide managers insight into the specific challenges the calves from this population face early on in life. Born into a competitive world, most of those calves would perish in their first month of life. Only 30 percent of those calves survived to one month-of-age, and predation was the most important mortality factor during that period. Of the 34 calf mortalities we investigated, over half were a result of brown bears, and 20 percent from black bears. At a handful of sites, there was enough evidence to determine predation, but not predator species. Starvation and drownings each killed a couple calves. 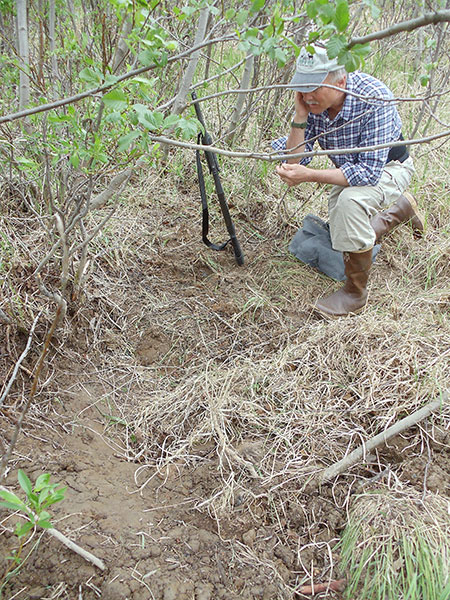 Biologists fly out to mortality sites to determine what kind of predator may have killed the moose calf. This is Rick Swisher; helicopter pilot (Quicksilver Air). Rick has been a fixture on countless DWC capture projects for more than 20 years.

Personnel with the Division of Wildlife Conservation use a variety of methods to capture and tag animals to gather specific information on wildlife populations and the habitats they use across the state. The division’s combined annual tagging effort is an impressive one. During the offseason, wildlife biologists, technicians, and veterinary staff procure capture supplies and radiocollars (or other types of ‘tags’). Training also occurs during the off season and staff develop methods to capture and handle wildlife using the safest and most humane methods. We also obtain chemical immobilization drugs through our wildlife veterinarian and these are controlled by the Drug Enforcement Administration under the Controlled Substances Act and other medical and pharmacy laws.

Complex logistical planning occurs to schedule multiple personnel, aircraft, and crew lodging. Access to aviation fuel is commonly a limiting factor for conducting field work in remote areas, and therefore is of primary importance. For example, annual caribou captures in Southwest Alaska can require a daily one-way commute of up to 175 miles just to reach the caribou. In those instances, careful planning is required to ensure we have enough fuel for the 350 mile roundtrip, and also enough for getting some work done. 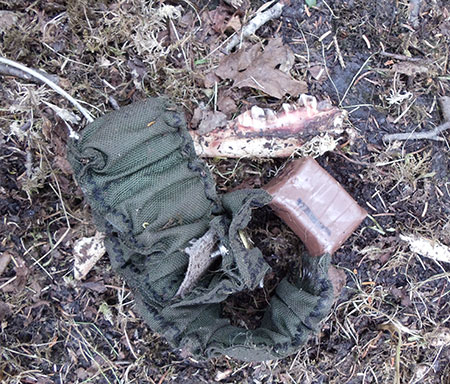 A radiocollar at the site where a moose calf was killed and eaten. These are the typical remains of a calf killed by a brown bear. Common remains for younger calves include bone shards, jaw bones, skull fragments and hooves.

The list of species captured and tagged by division personnel is equally impressive, and ranges from caribou, moose, wolves, bears, and wood bison, to marine mammals, to golden eagles to small game such as ptarmigan and grouse, to bats and passerines such as the olive-sided flycatcher. More than 20 wildlife species are routinely captured and tagged by ADF&G. Some years the combined number of individual animals handled by DWC staff approaches 1,000.

Significant thought goes into the capture and tagging of wildlife to maximize the data gathered to meet study objectives and minimize the impact on the individual animal. VHF transmitters are still used for many big game studies because these collars are not overly expensive ($200 - $500) and because they can last up to five years. They are very useful for population and demographic studies where multi-year data is required. Global Positioning System (GPS; $1,000-$5,000) collars and tags are used when fine-scale movement patterns are required such as a study of moose use of burned habitats or brown bear use of salmon streams. In those cases, we might need a location every three hours that is accurate to within 50 feet. We also deploy geolocator devices on small birds that migrate long distances and time and depth sensor tags on certain marine mammals.

Information provided by capturing, tagging, and monitoring individual animals is crucial for studying and managing Alaska’s abundant wildlife populations. And with technology being constantly improved, this approach will continue to play a significant role for DWC long into the future.

Nick Demma is a wildlife biologist based in Palmer.