Long-term Monitoring of Grouse
and Ptarmigan in Alaska 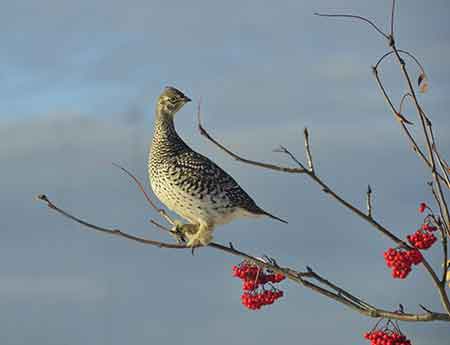 A female sharp-tailed grouse sits silently in the top of a spruce tree. She watches intently as a group of eight to 10 males performs an elaborate mating dance in the open dancing ground, or lek, below. Flashes of white from the underside of their tails attract the female’s attention.

The female flies to a lower branch where she can view the details of the dance more clearly. A male leans forward, wings outspread rattling his tail feathers. Then, inflating purple air sacs along his neck, he produces a strange “lurping” sound followed by a gentle cooing. He elevates his distinctive yellow eyebrows. The intensity of his dance builds until he abruptly jumps several feet into the air. Another male joins in the dance, stomping his feet, then charges at the first male. The two birds jockey for position, each trying to intimidate the other to gain control of the central point in the lek where their chances of soliciting the female are greatest.

Eventually the female sharp-tailed grouse flies to the edge of the lek. She watches one more dramatic display, then makes her selection. Although the female may not return to the same lek in successive years, the males likely will. Fires usually produce a mosaic of vegetation structures in Alaska, creating quality lek habitat for sharp-tailed grouse (also known as prairie grouse). Recent burns produce openings where male sharp-tailed grouse can display in close proximity to peripheral trees and shrubs and where female spectators can perch and watch. 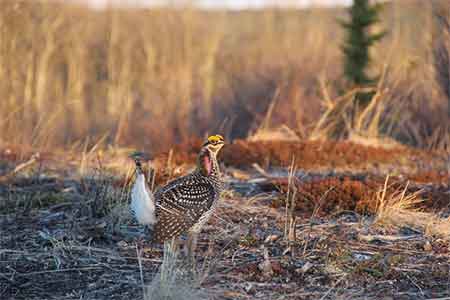 A male sharp-tail grouse in full breeding plumage on a lek near Delta Junction, AK. At each lek, up to 20 males congregate to perform elaborate mating dances. Typically the most dominant male gains control of the central region in the lek, and the best access to females. Cameron Caroll photo.

The female sharp-tailed grouse is not the only spectator at this lek. Hidden in dense vegetation at the edge of the clearing is Alaska Department of Fish & Game (ADF&G) small game biologist Cameron Carroll. Using her binoculars, she uses the white flashes of the males’ tails to help her determine the number of males present at each lek. Although it sounds like a simple task, sharp-tailed grouse are well camouflaged and keeping a count of different males is challenging as they periodically burst into action, displaying their white tails and launching themselves into the air in a flurry of feathers.

Each year Carroll and Rick Merizon, another small game biologist based in Palmer, visit sharp-tailed grouse leks across the Interior. For two weeks during the peak of spring breeding the biologists count males as they lurp and dance across historic leks, some of which have been monitored for almost 20 years. By counting males, biologists are able to estimate the relative abundance of sharp-tailed grouse in each region in relation to previous years. This information helps them to understand population trends, particularly since grouse, like other small game species such as the snowshoe hare, tend to have cyclic population fluctuations.

Understanding these population trends helps the biologists manage game bird populations and provide hunting/harvest opportunities for Alaskans. Grouse and ptarmigan hunting is an important cultural and recreational activity in Alaska. Pursuing these game birds is a particularly important way to introduce new or young hunters to hunting. Despite the large number of game birds harvested each year, little is known about grouse and ptarmigan populations or hunter harvest numbers in Alaska. Spring breeding surveys for sharp-tailed and ruffed grouse, and rock and willow ptarmigan, provide the best method by which the state can monitor these valuable resources. Unfortunately, surveys are often limited to road-accessible areas due to challenging snowmelt conditions. 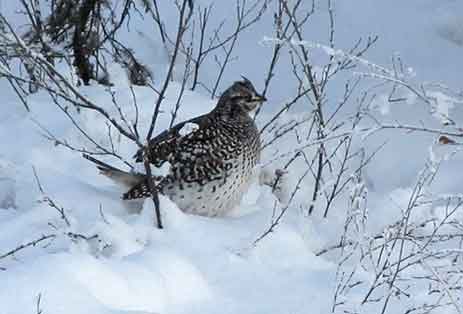 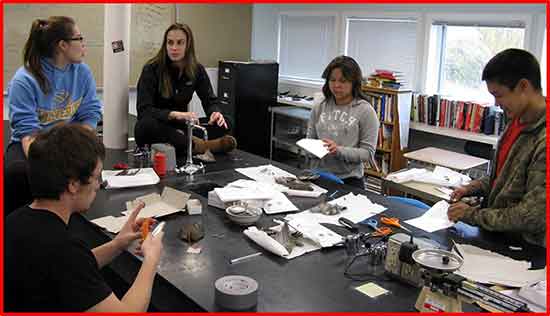 Students from Nathan Coutsoubos’ science class at Dillingham High School prepared and examined 51 grouse wings which they sent to the ADF&G Wing Collection Program. They used this citizen science opportunity to learn about data collection methods, grouse ecology, anatomy and physiology and the cultural importance of grouse in their area.

During past years, most of the wings donated to the Wing Collection Program were received from urban areas near Fairbanks, Anchorage, Mat-Su and the Kenai Peninsula; smaller numbers of samples came from more remote communities. In 2015 Nathan Coutsoubos, a science teacher at Dillingham High School, and his students collected 51 spruce grouse wings for the Wing Collection Program. Coutsoubos built an entire curriculum around his spruce grouse wing collection project. Students learned about spruce grouse ecology, biological data collection, bird anatomy and physiology, responsible hunting, and proper care and preparation of harvested game. Carroll and Merizon are hoping to increase wing submissions from rural areas by asking science teachers throughout the state to replicate the Dillingham High School project, not only to gain insight into grouse population harvest and dynamics, but also to strengthen scientific and cultural understanding of grouse and ptarmigan among Alaskan students.

Both the spring breeding surveys, and the Wing Collection Program are examples of long-term monitoring efforts by ADF&G. Unfortunately, these types of studies have become increasingly rare because current biological research is often related to funding cycles. Although there is value in short-term research projects, to understand population trends over time, long term monitoring programs are required. ADF&G recognizes the importance of studying grouse and ptarmigan populations over longer time frames. In the future, Carroll and Merizon hope to use baseline monitoring data from the game bird surveys and the Wing Collection Program to better understand grouse and ptarmigan response to a variety factors like snow depth, spring green-up date, winter temperatures, and fire severity. Increased knowledge of these populations will help ADF&G to better predict and manage grouse and ptarmigan populations, not only aiding conservation of the species, but also providing more harvest opportunity for hunters. 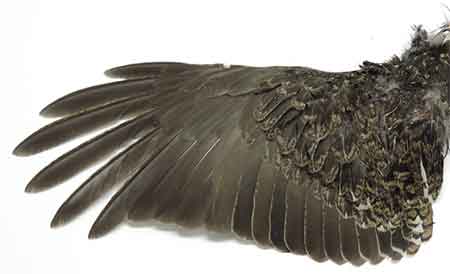 A hunter harvested spruce grouse wing donated to the Wing Collection Program at ADF&G. Through this program biologists are able to estimate harvest composition for numerous grouse and ptarmigan populations across the state