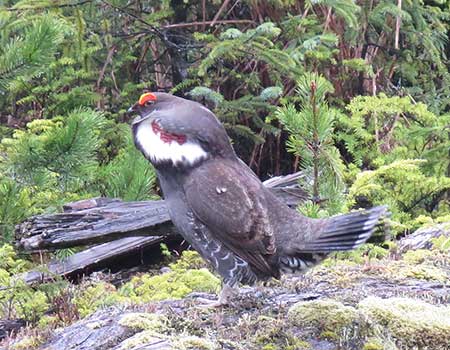 The low resinous hoot reverberated in my chest. I knew I had to be close to the hooting male sooty grouse. He was somewhere midway up an Empire State building-like Sitka spruce tree several miles and an arduous hike outside downtown Juneau. To get to this very point my hunting partner and I had to ascend nearly 1,500 vertical feet up slippery, water-soden ground covered with devils club and ankle busting brush in our Xtra-tufs. We began hearing this particular male nearly ½ mile away and had been trying to zero in on its location for 40 minutes.

Sooty grouse are a familiar species with a new name in Southeast Alaska. Up until the mid-2000s they were known as blue grouse. However despite their name change they have been pursued by active and passionate hunters for eons. Despite a long season (August 1 – May 15), most sooty grouse hunters invest most of their time during the spring (mid-April to the close of the season) as this is when males are displaying for females. Their display includes colorful featherless areas below their head. However the most unique feature of their display is a low, but loud, 4-5 part hoot. Males will display for many hours of the day however they seem to be most active during the early morning hours. Many residents of Southeast Alaska often equate the arrival of spring with the sound of hooting males.

Before I ever tried sooty grouse hunting for myself I received several key words of advice from a friend and co-worker who is an avid sooty hunter. He pointed out the three rules of successfully locating and harvesting a sooty grouse. First, you must hear the hooting male. This, as I learned, is the easiest of the three pieces of advice. A hooting male sooty grouse can be heard over ½ mile away. Second, you must locate the vicinity (cluster of trees) in which it’s hooting. This is far easier to suggest than to accomplish. To locate the vicinity in which a male sooty grouse is hooting a hunter must routinely ascend very steep, very brushy, and likely very slippery slopes often 1,500-2,500 feet above sea level. Male grouse tend to use sitka spruce or mountain hemlock as their stage; often small clusters of conifers near tree line. Finally, once the general vicinity has been located the hunter must embark on the most challenging feat of all, locating the bird before it decides to stop hooting. One might think that locating a 3.5 pound, big, dark grouse in a tree would be remarkably easy. However, as I learned sooty grouse often reside in the upper most reaches of tall conifers. Despite their size and frequent hooting, locating a sooty grouse on limbs dripping with thick mats of moss and conifer needle laden branches is incredibly challenging. To add to the difficulty, the grouse’s unique sound often can be projected on the vertical landscape to provide false positives (ie. they are excellent ventriloquists). 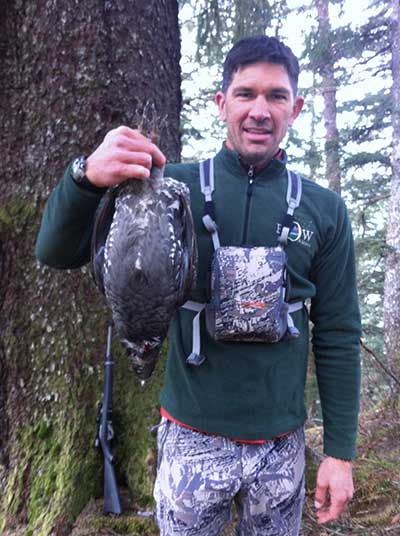 After walking around the same two trees for nearly 15 minutes, my hunting partner and I finally pinned down the location of the hoot from the top of one 50-foot tall Sitka spruce tree. Another 10 minutes of slowly examining every branch for the slightest movement we located the hooting male. Wiping a bead of sweat from my forehead I tried to catch my breath after a long hike and steady my .22 rifle scope on the target.

I squeezed the trigger and found my mark. I had harvested my first sooty grouse. I carefully hiked down to collect my beautiful, large rainforest grouse. Upon examining its incredibly plumage and size I finally caught my breath and soaked in the moment. Through the growing silence that can only be heard in a water soaked rainforest I heard another distant hoot through the thick vegetation. I looked at my hunting partner and raised my eyebrows. We packed up my camera and bird, took a big gulp of water, and began side hilling across a thick patch of devils club to try to achieve rule #2…again.

Following behind my hunting partner I realized sooty grouse hunting is unlike hunting any other grouse or ptarmigan in Alaska. I have heard it is a cross between sheep hunting and turkey hunting. You pursue an individual bird up and over some very unforgiving and physically strenuous terrain. However, the reward of harvesting a single sooty grouse is far greater than intercepting a flock of spruce grouse on a gravel road. A successful hunter has to be willing to mimic a mountain goat but the rewards of finally spotting a hooting male are fantastic.

Sooty grouse are a very unique species in Alaska. They are only found south of Yakutat in the rain soaked forest of Southeast Alaska. Birds can generally be heard from many of the roadways throughout various Southeast communities. Grouse populations appear to be stable and in many remote locations are quite abundant.

If you’re trying to locate me in mid to late April I’ll either be dreaming about or actually hiking in Southeast trying to accomplish rule #3…again!

Rick Merizon is a wildlife biologist with ADF&G's Division of Wildlife Conservation. He manages the statewide small game program, and conducts research and monitoring of grouse and ptarmigan. He's based in Southcentral Alaska.