The next group of fishes normally reside much further south of Alaska, or in waters far offshore, and tend to be encountered only during years with abnormally warm waters.

In 1998, the second year of a strong El Niño, a seiner from Washington caught two Pacific barracuda Sphyraena argentea in Valdez Arm of Prince William Sound. He sold one as a pink salmon for 15 cents per pound, and the other, a 32-incher, was mounted and is hanging in the ADF&G office in Homer. Pacific barracuda are common from Cabo San Lucas to Point Conception, California, but have been documented as far north as Kodiak Island during El Niño years.

Several members of the mackerel family Scombridae were reported caught in Alaska in 2015. A chub mackerel Scomber japonicus was caught near Chenega Bay in June. Chub mackerel occur widely throughout the Pacific Ocean, from Chile to the Philippines and north to the Gulf of Alaska. They have been reported from Ketchikan to waters south of Kodiak, usually caught in commercial gill nets or seines. Pacific bonito Sarda chiliensis were reported caught near Craig and in Neets Bay near Ketchikan. Bonito are a temperate water species, with their range normally stretching from Chile to the Gulf of Alaska. Most bonito in the northern hemisphere are between Baja California and Point Conception, California. Angler Bill Dawley decided to take advantage of the warm summer by successfully targeting albacore Thunnus alalunga in waters west of Prince of Wales Island in August. Albacore are found in temperate waters worldwide, but are most abundant where cold coastal waters merge with warmer oceanic waters. 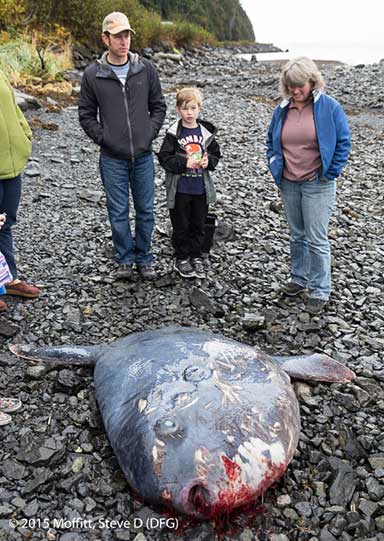 Ocean sunfish washed up on a beach near Cordova, ADF&G photo by Steve Moffitt

Another worldwide warm water species, the Ocean sunfish Mola mola, often shows up in Alaska during warm water years. True to form, a 66-inch-long sunfish weighing about 250 pounds washed up on a beach near Cordova in August 2015. Ocean sunfish have an unusual oval shape and lack a tail. They swim slowly, mostly drifting with the current and feeding on jellyfish and algae. On that diet they can reach lengths of about 13 feet and weigh over 3,000 pounds. 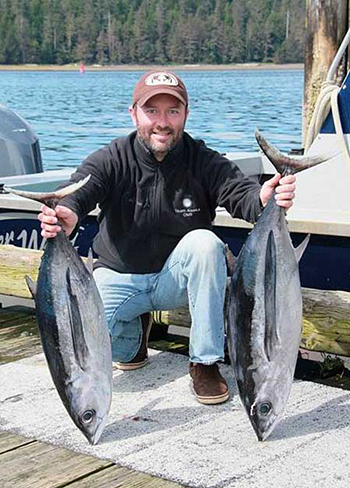 In August 2015, angler Randy Hiraki was fishing with Magnum Charters in Kodiak when he hooked a Pacific pomfret Brama japonica. Pacific pomfret are found throughout the Pacific Ocean from the tip of South America to the Gulf of Alaska on the east side, and from Japan to New Zealand on the west side. They are usually more of an oceanic species, found mostly in surface waters far offshore. The odd thing is that Mr. Hiraki also caught a pomfret on an earlier visit to Kodiak in 2005, fishing from a different charter boat.

Also in August 2015, Kodiak seiner Grady Pengilly pulled in a North Pacific pelagic armorhead Pseudopentaceros wheeleri fishing north of Spruce Island. Armorhead are so named because their heads are encased in external bony plates. This species is found throughout the eastern and western North Pacific. Juvenile and subadult armorheads roam throughout surface waters for 2-4 years or more, and eventually spend their adult years hanging out near the peaks of seamounts. The adults are most abundant on the seamounts of the Southern Emperor/ Northern Hawaiian ridge.

The warm summer of 2015 also brought a toothy visitor up north. A broadnose sevengill shark Notorynchus cepedianus was caught and released by anglers fishing near Montague Island in July. This species is widely distributed around the world but I found no reference to sevengill sharks found north of Southeast Alaska. 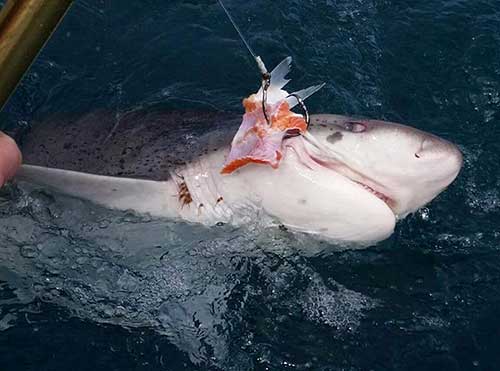 This has been a small sampling of some of the most unusual fishes I’ve come across. I’m sure many other biologists around the state have their own photos and stories to share. If you’re interested in the amazing variety of fishes in Alaska, I highly recommend getting a copy of Fishes of Alaska by Catherine Mecklenburg et al., published by the American Fisheries Society, 2002. And if you happen to catch something weird, don’t hesitate to send a note and photo to me or any other biologist. You just might add to the collective knowledge of a little-known species.