By Tom Seaton and Mike Taras 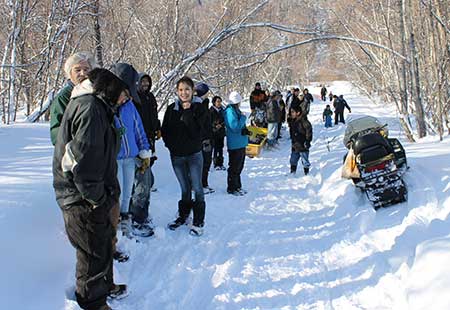 Grayling residents gather along the trail waiting for the bison to be anesthetized and moved to the airstrip.

On February 23rd, things were bustling in the small village of Grayling, located on the Yukon River. Several local residents were helping Department of Fish and Game staff prepare to move bull 132 out of the village. Students waited impatiently in their classrooms as Fish and Game personnel explained to them how they were going to anesthetize and move the animal with the utmost care. Bull 132 was an animal that the students of Grayling had grown to care for over the previous three weeks; feeding and watering it while preparations were made to move the bison that seemed to be stuck in their community.

Long before Yukon Helicopters arrived, approaching up the river in their massive Huey airship, you could hear the loud, “wop, wop, wop” as the rotors cut the air. The helicopter announced itself and by 1 PM, half of the village had viewed the giant red bird sitting on the airport ramp - then they moved to the bison pen to help with the loading.

At 1:30 PM, biologist Tom Seaton cleanly darted bull 132 and in three minutes, he was asleep, blindfolded and given supplemental oxygen. ADF&G staff worked fast, with highly practiced hands to collect all the required samples, administer necessary medications, and give a running tutorial to 15 students and more than 30 adults who were watching the entire process. Once the samples were taken, the bull was rocked onto a specially designed tarp-sling, heaved into a snowmachine sled with the hands of many men, and quickly transferred to the airport with an entourage of 50 caring citizens close behind.

At the airport, the tarp-sling was sewed up with high strength rope so there would be zero chance that the bull could slide out in flight. As the tarp-sling was hooked to the helicopter, final checks were made on the vitals and oxygen supplementation. Then the helicopter launched with ADF&G staff leading the way in a small fixed-wing airplane. The bison hung perfectly under that helicopter which traveled at about 60 mph for 22 miles. The destination was a nice sedge meadow where another lone bull of the same age had been feeding that day. Wood bison bulls of his age often travel with one or two other similar age bulls. Placing bull 132 near the other bull increased the chances that he will establish a home range away from the village. 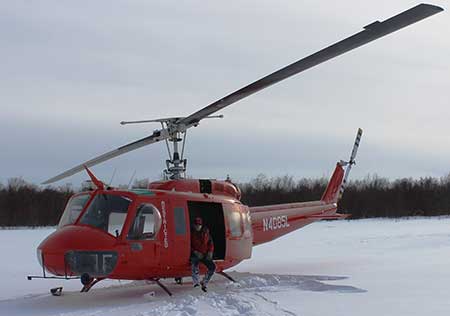 Upon arrival at the destination, ADF&G staff administered an immobilization reversal drug. In four minutes, the bison was up. He first took a few jumps away from the tarp-sling, but then returned to give it a good sniff. Next, he just slowly walked off into the brush to feed, exhibiting normal bull bison behavior.

Why was he moved?

Wood Bison bull 132 was originally released on June 25th with 17 other bulls four miles upstream of Shageluk on the West bank of the Innoko River. He is a 5-year old bull in good condition. Five years in bison-age amounts to about a half-sized animal with adolescent behavior. Two thirds of the bulls released that day joined cow groups for the coming rut, and one third were too young to be competitive in the rut and moved on to explore their new habitat. Cows and young bison (1-3 years of age) often stick together in tight knit groups, but bulls spend much of their year alone or in small groups of two or three.

By June 29, bull 132 had struck out on his own and made it 25 miles to the bank of the Yukon, south of Grayling. By July 11th, he was south of Anvik along the east bank of the Yukon, still alone. By the 23rd of July, he had crossed the Yukon and was 12 miles upstream of Grayling. By July 31, he was alone on the streets of the village of Grayling. He continued to make forays of varying distances outside and around the village of Grayling for the next few months, occasionally being spotted with another bull or two. However, he moved back to the south end of the village on December 1, where he stayed for most of December, January, and February. 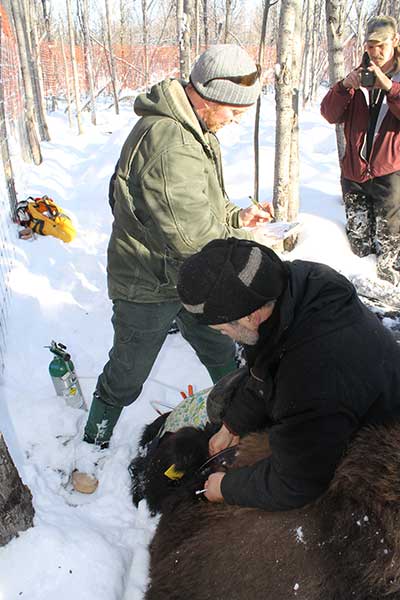 Nobody wants to have a 1,200-pound wild animal around town. ADF&G personnel and community bison guards repeatedly hazed him out of town. Bison guards are people from the local communities trained to safely haze bison away from areas such as the airport or the village. Despite many hazing efforts, he would always return to the village. During December and January, people frequently sighted the bull in town along the streets and trails and in yards. Folks exiting or entering their houses sometimes encountered him at close range and loose dogs harassed him. The generous people of Grayling took care to avoid the bull and treat him with respect for months and the bull never showed aggression toward people, and would flee if approached.

As time went on, nerves wore thin with the worries of children, elderly, and anyone else sharing their space in close proximity to a 1,200-pound animal. The bull found his way into abandoned buildings where the potential for injury from falling through the floor existed. People also reported seeing him eating cardboard and other refuse. It was obvious that his chances of surviving the winter would be better away from the village.

Almost all of the wood bison released in 2015 made the transition from captive to wild with minimal challenges and quickly became strictly wild bison. As expected, a few did not. A few died within the first few weeks from stress related to that transition. Nature chooses which animals will survive to the next generation in the wild and nature had some sorting to do with the newly released wood bison herd. Bull 132 survived the transition to the wild, but chose the wrong place to be wild (the village of Grayling). 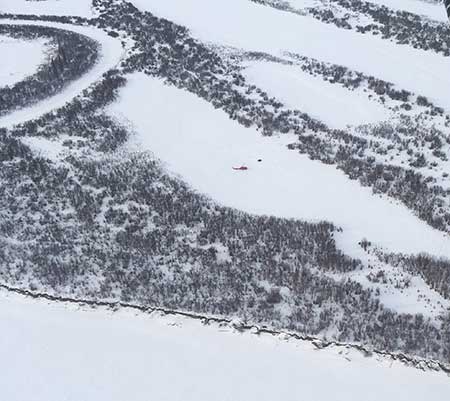 The helicopter lands in a sedge meadow where bison 132 was relocated and released. If you look closely you can see another wood bison bull standing along the bank of the river.

In January, bison biologist and project leader Tom Seaton asked local elders and leaders what options they preferred for dealing with the bull. One option was to kill the bison at the village and distribute the meat to the needy. Unanimously, the elders and leaders of Grayling did not want the bison killed. They indicated that the animal was too important to the future of the wood bison project to kill.

pound bull. Fortunately, local knowledge uncovered a helicopter pilot in Bethel with a ship big enough to lift the bull. After contact with Yukon Helicopters, owner Tom Ratledge was eager to do the job and generously agreed to discount his rate to help with wood bison conservation.

While the move was being planned, the Grayling school agreed to make a class project out of feeding and watering the bull if ADF&G captured him and built a secure fence to hold him. On January 29, a fence was built in Grayling just south of town in the trees where the bull had been spending much of his time. Before finishing the pen, the bull appeared on a trail nearby curiously observing the efforts. As construction was finishing up and darkness setting in, Tom Seaton placed small handfuls of hay along the trail. Bull 132 was captive in the secure pen within an hour. 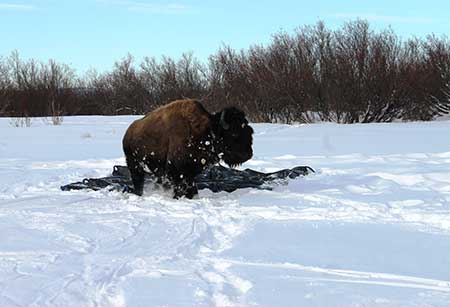 Bull 132 wakes after a 22-mile flight and an immobilization drug reversal injection.

Over the next few weeks, the students of the Grayling school had the most amazing bison conservation experience ever afforded to a school. They had their own bison to go view and care for every day. In the classroom, they studied several aspects of wood bison care and natural history. Over the course of those weeks, the students developed a bond with bull 132, and he was given at least three names.

In the six days following the relocation of bull 132, he stayed within a mile of the feeding meadow where released. He was not seen in close proximity to the other young bull, but they have stayed within a short walking distance of each other.

It is the policy of ADF&G not to relocate nuisance animals. In very rare cases, it may be done. The patience that the village of Grayling exhibited with this bull, and their request that this bull contribute to the future of wood bison conservation in the area had a lot to do with the decision to relocate this individual bison. It is highly unlikely that ADFG will have a need to move bison away from villages in the future. More than 95% of the 130 bison released in 2015 have not been seen near a village. A few have occasionally passed through, and this one bull decided to stay. Other bulls and one cow group have passed through the village of Grayling while exploring their new range in the last year, and all of them have moved on.

For more information on how wood bison were returned to the USA in Alaska after a 100 year vacancy, please visit our wood bison web page.