No One in Alaska Died
Commercial Fishing in the Past Year 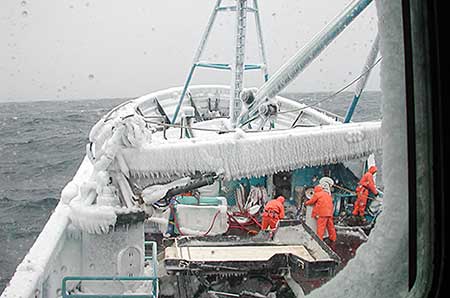 A Bering Sea crab boat. A variety of factors have combined to make this fishery much less dangerous. ADF&G photo

Commercial fishing has been getting safer for decades, for a lot of reasons. The U.S. Coast Guard recently announced a milestone: No one in Alaska died commercial fishing in a vessel-related incident in the past year, for the first time.

Scott Wilwert is a fishing vessel safety expert with the Coast Guard. He spent 20 years in active duty in a variety of roles, and after retiring in 2005 came back as a civilian working in vessel safety. He said management practices have made fishing safer - the end of the famous derby-style halibut and crab fisheries in particular. But there are a lot of other fisheries in Alaska, and significant changes have occurred in the commercial fishing industry. He said today, fishermen are better equipped and better prepared. And there are also fewer people fishing – especially in what were traditionally the most dangerous fisheries.

He thinks attitudes have changed as well.

“There is a change in the culture of fishing,” he said. “Kids that are friends of my kids, 22, 23 years old, getting their dad’s gillnetter, they embrace safety. They are more prepared. You don’t have that, ‘you have to go out but you don’t have to come back’ mentality.”

In the 1980s and early ‘90s, crab and halibut fishing were two of the most dangerous occupations in America. Fishing was packed into short openings; people went out in bad weather, boats were overloaded, and crews worked to exhaustion. Crab rationalization and fishing quotas (IFQ) changed that – now seasons are longer and fishermen have more choice when they go and how they spread out the work. It’s made those fisheries much safer. It also led to far fewer boats in the water. Some fishermen lease their quotas to others and don’t go out.

“In the ‘70s and ‘80s there were about 235 vessels active in the Bering Sea and Kodiak king crab fishery,” Wilwert said. “Now there are 65 to 75 active. There are less people out there and less that can happen. They still have deadlines and quotas. But the vessels are better – we do pre-season stability checks. A lot of the problems in the derby-style crab and halibut fisheries were related to instability and overloading.” 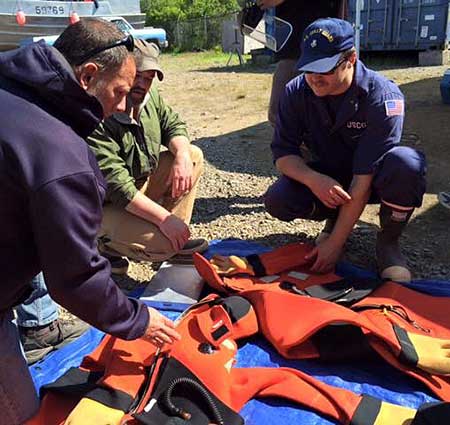 In 2005 the number of crab pots a boat could carry was limited, based on vessel size and stability, which means boats today are less likely to be overloaded.

In the 1970s, commercial fishing vessel safety requirements were not much different than those for recreational vessels. That changed with the Commercial Fishing Industry Vessel Safety Act (CFIVSA) of 1988. CFIVSA was implemented between 1990-1995 and things like immersion suits and life rafts became required equipment. Safety drills and first aid training were required for crewmembers.

“We had four-and-a-half times the national average for voluntary dockside exams,” Wilwert said.

A boat that passes the thorough safety exam gets a sticker. “Now, there are lots of motivating factors to get the sticker," Wilwert said. “A vessel owner’s association, like the Petersburg Vessel Owner’s Association, might require it for membership. Insurance might require it. It is required if a boat is going to take a NOAA observer on board.”

On Oct. 15, 2015, dockside exams became mandatory for all commercial vessels that fish beyond three miles from shore.

Mandatory safety gear isn’t much good if fishermen don’t know how to use it. The Alaska Marine Safety Education Association (AMSEA) teaches mariners how to deal with emergencies, use their gear, and assess risks. Wilwert said it’s making a difference.

“We’re noticing fewer vessel losses – sinkings – and there are a lot of reasons why,” he said. “But the survival rate from a vessel capsizing or sinking has gone up dramatically. There are drills and training, and fishermen know how to use the equipment.” 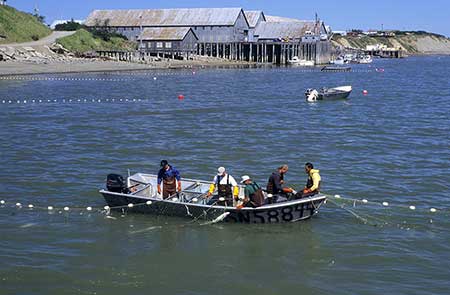 Set-net skiff fishing on a sunny day. In the decade 2000-2009, 39 people died commercial fishing for salmon. Falls overboard were the leading cause of death. Vessel disasters contributed to 33% of deaths in the salmon fishery. Most of these vessel disasters occurred on set-net skiffs and were almost always swamped and capsized in poor sea conditions. ©Mark Emery, used with permission.

AMSEA is based in Sitka and has trained more than 200,000 people since 1985. The group works mostly in Alaska but also on all coasts around the United States. AMSEA provides hands-on training, Wilwert said.

“They put them in survival suits and put them in the water. They’re lighting flares and extinguishing fires, doing damage control. They have classroom sessions on cold water shock and hypothermia. And we have lots of success stories. We’ll do a debriefing (with crewmembers after an incident) and they’ll say, ‘We knew what to do. We got in our suits, we had the raft ready, we made the mayday call.’”

Jerry Dzugan has been the director of AMSEA since 1986. He said it is unusual to have a national organization based in a town of 8,000 people with no roads connected to the outside, but it keeps them in touch with their roots in the fishing industry.

Dzugan offered some additional insights into the industry. One is the economy. “A healthy fishing industry is safer,” he said. “When the economy gets bad, people start cutting corners, whether you’re a big steel producing factory or a fishing boat. Safety is considered optional in some sense. A healthy industry allows them to have an income to get the required equipment, or new equipment, to replace that 30-year-old survival suit with a new one, and to better maintain their boats.”

Dzugan pointed out another factor that’s helped reduce fatalities – the EPIRB. The device - an Emergency Position Indicating Radio Beacon – was required by the CFIVSA for vessels that fish more than three miles offshore. The automatic signal guides rescuers in the event of an emergency.

The National Institute of Occupational Safety and Health (NIOSH) has also had a role in making fishing safer. A federal agency within the Department of Health and Human Services, NIOSH has studied fishing safety to reduce injuries and fatalities since 1991.

The leading cause of death for commercial fishermen is “vessel disasters,” boats capsizing or sinking. Man overboard fatalities are the second leading cause of death. Between 2000 and 2014 there were 210 fatal falls overboard in the United States and not one of the victims was wearing a personal flotation device (PFD) when they drowned. Wilwert said man overboard fatalities in Alaska were especially bad with the crabbing fleet. 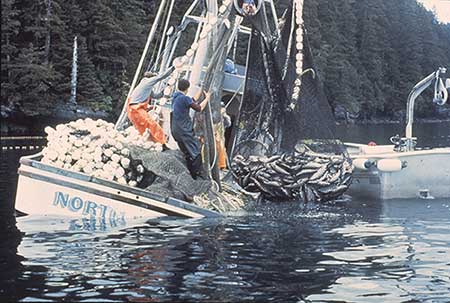 An overloaded seiner. A salmon seiner is designed to ride low for stability, but water and fish on deck raise the center of gravity and can shift contents in partially filled holds and tanks below deck (free surface effect), both of which greatly decrease stability. A failure in the fittings in the rigging could be a disaster in this situation. ADF&G photo.

Wilwert pointed out one particular NIOSH project involving PFDs in Alaska. NIOSH enlisted the cooperation of fishermen: different PFDs were worn for 30 days on deck by 400 fishermen in four different fisheries, so “wearable” PFDs could be identified. Fishermen evaluated the PFDs and NIOSH published and distributed the findings. NIOSH worked to help fishermen find PFDs they would actually wear.

“NIOSH made people aware what was out there,” Dzugan said.

Wilwert mentioned one style – a PFD that is built into the suspenders in bib-type rain gear. The suspenders just feel a little more padded, but they inflate automatically if someone hits the water.

On-deck injuries account for the third leading cause of death, but it’s much smaller than the other two – just 12 percent. One thing that’s helping reduce on-deck injuries is the growing use of emergency stop devices on deck machinery.

George Wood has seen the changes in 50 years of fishing in Bristol Bay and Southeast waters. He lives in Petersburg and has participated in close to a dozen different fisheries since he began commercial fishing in 1965. These days he’s a Southeast gillnetter, targeting salmon and herring, and he longlines for halibut. As a gillnetter specifically, he said the increased use of lead slingers – which help set the net off the boat – has helped mitigate one of the most potential hazards, getting pulled overboard as the net is deployed. 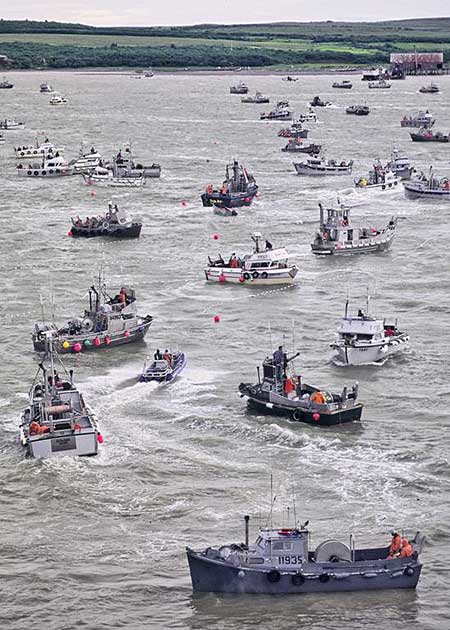 He’s also seen boats change. “Speaking for us smaller boat owners, the fleet has changed from smaller, lighter wood boats to boats with a much greater beam, heavier, greater freeboard, divided fish holds, flush decks in the stern and much improved electronics, led by GPS and better radar.”

He said IFQs made the biggest difference. In similar fashion, salmon seasons are longer, “Taking out the need to push yourself when you shouldn’t when weather or lack of sleep are working against you.”

“I can’t put my finger on why, but I do see the younger fishermen be more safety conscious. As far as fishing being safer in general, I would say it definitely is.”

AMSEA and upcoming courses in Alaska

Surveillance and Prevention of Occupational Injuries in Alaska: A decade of Progress, 1990-1999

An excellent overview of the industry can be found here - Fatal Occupational Injuries in the U.S. Commercial Fishing Industry: Risk Factors and Recommendations Alaska Region (Looks at trends 2000-2009)