“We know just what to do. We just need the river to do it.” --Anonymous salmon (from the Mark Titus film “The Breach”)

Rivers – the Stikine, Kuskokwim, Situk, Karluk, Chatanika, Nushagak, Copper, Kenai, Chena, Kvichak, and Taku. And creeks – Montana, Cowee, Willow, Campbell, Sawmill, Deception, Clearwater, and Peterson. From short, steep creeks cascading down coastal mountains in Southeast, to long, braided rivers meandering across the boreal forests of the Interior, and everywhere in between, Alaska is a state rich in fresh, flowing water.

The lives of Alaskans have been intimately tied to rivers since forever. Rivers provide food, drinking water, travel routes, renewable energy, recreation, and countless other uses. Most notably, the water flowing in rivers provides Alaskans, and the world, with salmon. Indeed, the cultural, social, and economic fabric of Alaska has been – and hopefully always will be – interwoven with its rivers teaming with wild salmon.

Salmon need water. What, you already knew that? But did you know that you can get water rights to legally protect the water salmon need? And that the Alaska Department of Fish and Game (ADF&G) has acquired water rights to do so for rivers and creeks throughout Alaska, including all those listed above (and many more)?

When the Alaska Water Use Act was enacted, water rights could only be obtained for out-of-stream, or diversionary appropriations, appropriations whereby water is diverted, withdrawn, or impounded for offstream uses. The Alaska legislature amended this Act in 1980 (Alaska Statute 46.15.145) in recognition of the benefits of keeping, or reserving, water in rivers and lakes for instream uses.

This amendment, referred to as Alaska’s instream flow law, provides the opportunity for individuals, organizations, or government agencies to acquire water rights – called reservations of water – to maintain specified instream flow rates in rivers or water levels in lakes for the following instream purposes: protection of fish and wildlife habitat, migration, and propagation; recreation and parks; navigation and transportation; and sanitation and water quality. ADF&G obtains reservations of water to protect fish habitat, migration, and propagation. A big benefit of water reservations is that, regardless of the purpose for which they are obtained, they help protect all other instream uses of water. 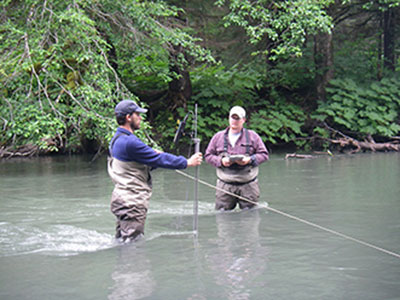 J-rod and Hassman measuring discharge at ADF&G’s Cowee Creek stream gage site. ADF&G used data from this gage to get a water right to protect fish habitat, migration, and propagation in this important creek out-the-road from Juneau.

The first step in getting a reservation of water is to fill out an application and file it with the Alaska Department of Natural Resources (DNR); the state agency that administers the Water Use Act. The applicant needs to describe where, when, and why they want to reserve water and, most importantly, how much water they want to reserve. So, how much water do fish need? This is a difficult question given that different fish species have different instream flow related habitat, migration, and propagation needs at different times of the year. To address this question, one needs to look at the nature of rivers.

Rivers are really pretty simple things: a river is simply water moving downhill over the landscape – picking up, moving, and depositing materials like small gravels, big boulders, spindly alder branches, massive spruce trees, ill-placed campsites, and whatever else it encounters along its way to the sea. This movement of water, sediment, and woody debris plays a defining role in creating and maintaining the mosaic of instream, riparian, and floodplain habitats needed by fish. A wide range of flows is needed to make all this good stuff happen.

Anyone who’s spent time on Alaskan rivers knows their flows can vary considerably on an hourly, daily, seasonal, and yearly basis. This natural streamflow variability is essential in maintaining the ecological health and productivity of river systems. Salmon and other fish are adapted to, and depend on, the natural variability of a river’s flow regime to access and use the habitats – the deep pools, gravel riffles, log jams, undercut banks, sloughs, migration corridors, beaver ponds, etc. – they need to successfully migrate upstream, spawn, incubate, hatch, rear, and then migrate downstream to start it all over again.

The purpose of ADF&G’s reservations of water is to reserve and protect the flows fish need to access and use their migration, spawning, and rearing habitats. In deciding how much water to reserve and when, we request flows that mimic the natural seasonal flows that fish rely on. Similarly, when reserving lake levels, we request the natural seasonal lake levels that fish need to use their spawning, rearing, and feeding habitats in inlet streams, outlet streams, and shallow shoreline areas of the lake.

Five years of continuous streamflow or lake level data are typically needed to prepare and file a reservation application. When available, U. S. Geological Survey stream gage records are used. Unfortunately, most rivers and lakes in Alaska lack streamflow or lake level information. As such, ADF&G’s Water Shop started a stream gaging program about 13 years ago to collect the hydrologic information needed to prepare reservation applications. Since that time, the Water Shop’s Jarrod Sowa and Jason Hass have become the best stream gagers in Alaska, bar none. 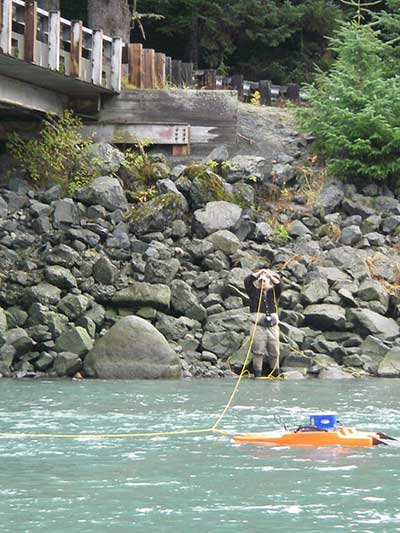 Hassman pulling an acoustic doppler current profiler across the Chilkoot River to measure discharge at ADF&G’s stream gage site. ADF&G used data from this gage to get a water right to protect fish habitat, migration, and propagation in this popular river near Haines.

Most of the Water Shop’s gaging projects have been in Southeast. We’re currently gaging Peterson and Windfall creeks (both out-the-road Juneau), and the Thorne River on Prince of Wales Island. We just finished collecting five years of lake level data on three lakes – Turner, Eagle, and Orchard – classified and managed by ADF&G as trophy cutthroat trout lakes. Stream gaging projects have been completed on the Chilkoot River (near Haines), Cowee Creek (out-the-road Juneau), the Lost River (near Yakutat), and Sitkoh Creek (not near any place), to name a few. Reservation applications have been filed on all of these rivers, creeks, and lakes.

After filing a reservation of water application with DNR, and after DNR has accepted it as complete and given it a priority date establishing the seniority of the water right, the next step in securing a reservation of water is the adjudication process. Adjudication is the legal process determining the validity and amount of a water right. It starts with ADF&G and DNR negotiating the flows (or lake levels) to be reserved. If all goes well, it ends several big steps later with DNR issuing a certificate of reservation – the legal document establishing the water right – to ADF&G. A certificate of reservation remains in effect in perpetuity (with a few caveats).

This work has been supported primarily through funding from the U.S. Fish and Wildlife Service Sport Fish Restoration program (federal aid) and the Alaska Sustainable Salmon Fund (AKSSF). Most of the work in Southeast, including the stream gaging projects, has been funded by AKSSF. The trophy cutthroat trout lake level gaging projects were funded through a grant from the Western Native Trout Initiative (thanks Roger).

Why Are Reservations of Water Needed?

It is difficult to count the number of rivers and lakes in Alaska: suffice to say there are tens of thousands of rivers flowing hundreds of thousands of miles across Alaska, with more than a million lakes doting the landscape. ADF&G’s Anadromous Waters Catalog has specified over 18,000 streams, rivers or lakes as being important for the spawning, rearing or migration of anadromous fish (this number may represent less than half of the waterbodies actually used by anadromous species). Almost half of the Nation's total surface waters are located in Alaska – less than 1% of which is currently appropriated for out-of-stream uses. 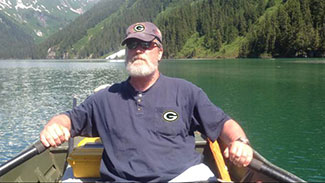 The author rowing – not motoring – across Turner Lake because someone forgot the outboard gas on the floatplane. ADF&G operated a lake level gage on Turner to collect the information needed to get a water right to protect the natural lake levels of this trophy cutthroat trout lake. Go Pack.

Given this abundance of water, I’ve often been asked “why are reservations of water needed?” It’s true: there currently isn’t a lot of competition for Alaska’s freshwater resources, which is exactly why it’s a good time – right now ­– to secure water reservations. There was a time not so long ago when rivers throughout the Pacific Northwest (PNW) were free-flowing and full of wild salmon. Not so much anymore. The natural flow regimes of many of these rivers have been regulated and altered by dams, impoundments, diversions, and withdrawals – without consideration for the water salmon need.

Like in Alaska, water law throughout the western U.S. is based on the doctrine of first come, first served. Consequently, when it comes to getting a water right, it pays to be first in line, like at an ADF&G office potluck (so you can appropriate my brother’s deep-fried halibut balls, Kercia’s moose lasagna, Teske’s crab dip, Judy’s blueberry pie, all the good stuff, before it’s been appropriated by people ahead of you in line). Much of the water in the western U.S. has been appropriated for out-of-stream uses. The instream flow needs of fish are often at the back of the water rights line.

The history of water use throughout the PNW has shown that protecting instream flows for salmon is easiest when competition for water is low: it becomes increasingly difficult as competition for water increases. What will the competition for Alaska’s freshwater look like in 50 years? 100 years? Securing reservations of water is a proactive and long-term legal tool for dealing with the challenge of protecting fish habitat while meeting the growing demands for water in Alaska for domestic uses, hydroelectric and hydrokinetic development, transportation infrastructure, water export, oil and gas development, mining, and other purposes.

It’s simple, salmon need rivers – and the water flowing in rivers – to do their thing. As a salmon simply stated “We know just what to do. We just need the river to do it.” This pretty much sums up the importance of securing water rights for fish.

Shawn Johnson has had the good fortune of spending the last 30 years playing in rivers all over the United States, the last 13 in Southeast Alaska working for ADF&G. Rivers are his life: that’s why his son, instead of calling him Dad, calls him Old Man River.