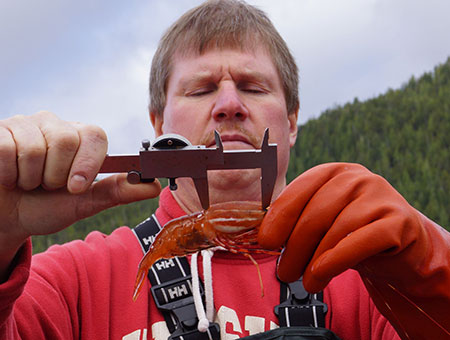 Rain, wind and rough ocean conditions are always a challenge for Alaska’s management biologists conducting field work. Storms can happen any time of year, but nothing in Southeast Alaska quite matches the inclement weather that confronts Ketchikan shrimp biologists gathering harvest data from the shrimp pot fisheries throughout October in the southern districts.

The primary species of shrimp harvested in the Southeast Alaskan pot shrimp fishery is the white spot shrimp (Pandalus platyceros). They have a very interesting life history as they are protrandic hermaphrodites. This means that they all start out as males and at a given time turn in to females, usually in their 3rd or 4th year. The size that they turn into females is one indication of the health of the stock.

The pot shrimp fishery begins on October 1st of each year and currently lasts around two to four weeks in the Ketchikan districts. Fishing occurs in areas that can require crossing Clarence Strait, traveling around exposed capes including Cape Chacon, and skirting Dixon Entrance. In addition, gale force winds can be magnified in the many steep walled fjords, wide canals and wind whipped islands found in so many of the shrimping areas. Winds can come from any direction as they bounce off mountains and ridges. 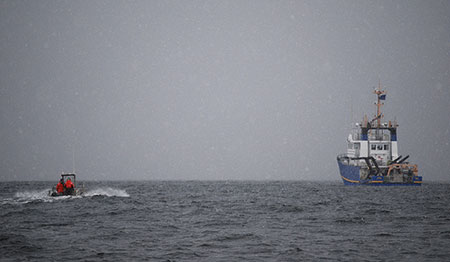 Skiffing back to the research vessel Kestrel.Photo by Dave Harris.

In the Ketchikan area, we conduct two different programs. One is a pre-season pot survey to access the shrimp population before the fishery and the other is a management survey that samples the commercial harvest from the actively fishing boats.

Our pre-season pot surveys occur in August and September each year. These are quite civilized events that take place on nice days where sampling occurs on the back deck of a state vessel or in a covered lab. The state vessels Kestrel or Medeia are loaded up with shrimp pots and sent out to determine the pre-fishery population status of shrimp stocks. Once the vessel is in a pre-determined area, pots are set in the same spot each year.

One of the mundane tasks required of all field biologists is sampling of animals. This includes measuring, weighing or ageing a particular animal of interest. And of all the critters that I sample, shrimp rate high on my “avoid when possible” list. Collecting data on shrimp requires measuring, lots of measuring. We measure more than 21,000 shrimp just for the pre-season surveys. Obtaining the length of a shrimp carapace requires moving caliper arms back and forth and squinting to read tiny numbers written on a dial by sadistic caliper engineers. To make matters worse, shrimp have a sharp two-inch sword on their front. When you reach into a tote of shrimp to grab one, a sharp spine is waiting for you. 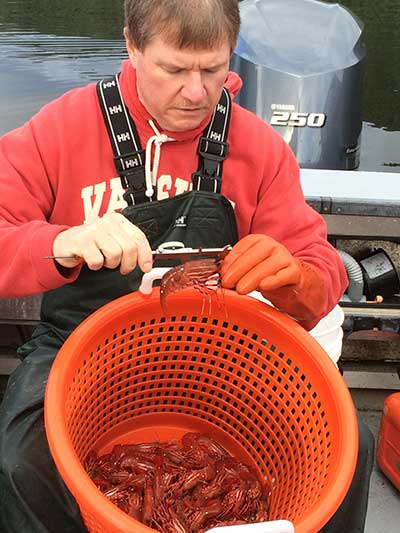 During the early years of our pre fishery sampling, regimes were tested that required massive amounts of shrimp to be measured. Each of many pots had to have nearly all the shrimp measured until we were nearly blinded with fatigue and our fingers were like claws. By the end of the trip, biologists were focused on making up stories that described in clear detail why they wouldn’t be available on next year’s trip.

Fortunately, through trial and error, we determined that we didn’t have to measure so many shrimp. We currently measure 50 shrimp from each pot. In addition, we take a sample that is taken back to our lab to determine the size and sex of each shrimp.

The second part of our shrimp research program is the management sampling cruises. These trips are in the early weeks of October, when gales and heavy rain are at their nastiest in Southern Southeast Alaska. Although cruises are often conducted from our larger vessels, our sampling is done from a 19-foot aluminum Workskiff which is carried from district to district on the back deck of the vessel. 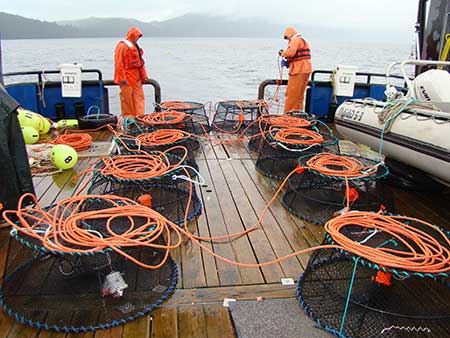 Crew of the ADF&G research vessel Medeia prepare to deploy shrimp pots off the back deck during the 2007 preseason survey in Cordova Bay. Photo by Scott Walker.

Management surveys are critical to determine what the fishermen are harvesting. But due to the consistently bad weather, sampling the fishermen’s pots are challenging. Many of my worst boat moments have been fighting through a fall storm to get to the next shrimp sampling district. In 2015, Clarence Strait had 80 knot winds and waves that would have dwarfed the F/V Kestrel, our research vessel, had we been caught in the middle of Clarence Strait. Boat travel is timed in between storms and trips are often cancelled or shortened if too many storms are in a row as was the case in 2015. When the wind is light between storms there is almost always plenty of rain. One October day in 2015 registered a 24 hour period that had over 5 inches of rain. In 2014, one 48 hour period had over 9 inches of rain during the last days of September.

The sampling plan for these wet and wild adventures is to hoist our skiff off of the larger vessel around 8:00 am and immediately depart as the fishing boats start pulling their pots. We go from boat to boat talking to fishermen and return wet, cold and miserable around 4 pm when the fishery is closed to any more hauling of gear. Biologists take a sample from each vessel that usually includes all the shrimp from one pot. We then measure 50 shrimp after which we take the shrimp back to the vessel when we are done. We also keep 50 shrimp for a size at sex sample from as many boats as possible. Sharp shrimp spines keep you from having any illusions that your hands will stay dry past your first few minutes of sampling. The 2015 survey in District 3 encompassed over 90 miles of skiff travel as we went from boat to boat collecting samples. Sometimes during inclement weather we have to get back on the larger vessel and go from bay to bay as the weather is too rough for the smaller skiff to operate. 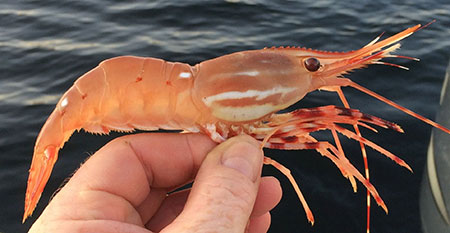 Some surveys are conducted directly from the Ketchikan office on day trips when weather allows. Even though we usually avoid crossing Clarence Strait, the weather is always unpredictable. In 2013, after sampling in District 1 on a blustery rainy day in our 24 foot aluminum Tuff Boat, we were nearly stopped dead by a gust of wind that hit us as were traveling at full speed.

By the time the season is over, the data is entered and our boots and raingear are drying out by our desks, our high seas adventures are just one more memory of life as an Alaskan fisheries biologist.