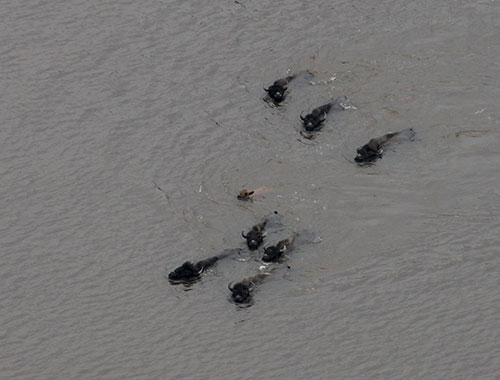 Wood bison are strong swimmers and have crossed the Innoko and even the Yukon River.

"It's turning out better than I could have hoped for," said Seaton, a biologist with the Alaska Department of Fish and Game in Fairbanks. He is head of a project in which 130 wood bison are now roaming the low grass and sedge country near the village of Shageluk. Shageluk is a village of 130 people on the Innoko River.

In this "intense monitoring stage," Seaton recently flew out to the new herd to sample portions of their bison patties, in order to see what they are eating. He issued this report on the creatures, most of which had been living for years in captivity at the Alaska Wildlife Conservation Center in Portage.

"Now that I've seen them on the landscape for a few months, I'm confident they can do anything a wild bison can do," Seaton said in his Fairbanks office. 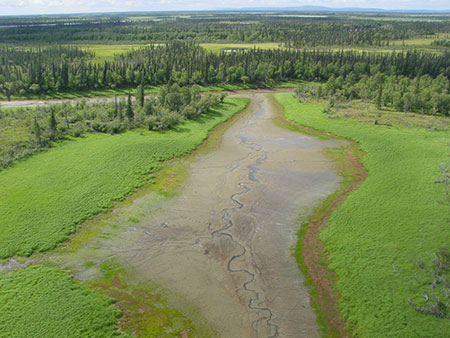 Sedge meadows in the area where wood bison were first released.

The massing creatures adapted to boreal wetlands have been seeing the territory since they were airlifted and boated to their former stomping grounds during a few complicated 2015 missions.

By monitoring satellite transmitters clinging to massive necks by belts designed for elephants, Seaton has watched the bison make huge clockwise loops through the Innoko National Wildlife Refuge and beyond. One cow has swum the Yukon and is north of Russian Mission. A few bulls also crossed the big river and almost made it to Unalakleet on the Bering Sea coast.

Seaton is pleased to see most of the bison circling back to near their introduction points near the village of Shageluk.

"One of my biggest worries was they'd go away to where they couldn't find each other again," he said. He got a bit nervous when he watched some of the collared animals dispersing as far south as the Kuskokwim River.

"But then they did a big loop back," he said. "They were just exploring. Now they know the hills, the flats, where the good vegetation is."

The quiet country where the Innoko runs next to the Yukon is now home to bulls the weight of 10 men, smaller but more numerous cows, and a few calves born on the muskeg this summer. This modest population is the only group of wood bison in the United States (plains bison that live in other areas of Alaska, the Lower 48 and Canada are a different, smaller species). Seaton expects the herd will grow to somewhere between hundreds to several thousand animals. 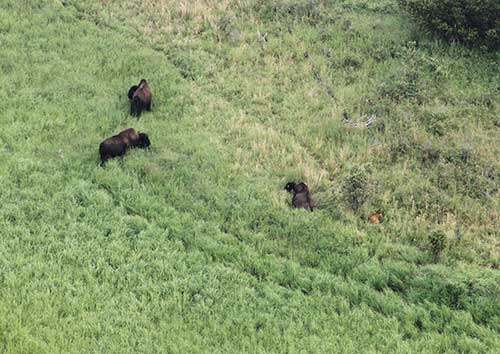 Bison on the landscape. A calf is resting in the grass.

Wood bison were in Alaska before. Adapted to low, wet areas, wood bison lived in Yukon Flats and other areas of Alaska from about 10,000 years ago until they disappeared.

In 1991, a Fort Yukon resident told now-retired Fish and Game biologist Bob Stephenson his mother had stories about bison living near the village. Elders interviewed from 1991 - 2000 in Beaver, Birch Creek, Chalkyitsik, Fort Yukon, Venetie, Minto and Nenana shared stories of bison or at least knowledge of them. Some mentioned seeing herds of bison near Eagle, Circle and Fort Yukon in 1916 or 1917.

Stephenson knew the rare creatures existed in Canada, so he proposed re-introducing wood bison to Yukon Flats. Yukon Flats is one of three areas — along with Yukon/Innoko and Minto Flats — with ample grasses, sedges and forbs for bison. 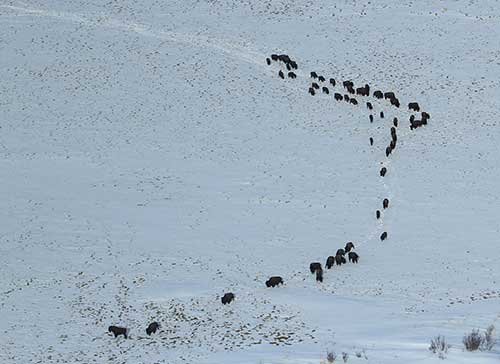 Wood bison in the spring of 2015, shortly after the initial introduction.

Twenty years after Stephenson's suggestion, Seaton took over the program. Amid a blur of activity, he remembers a lot of meetings bringing people together from the three potential areas. Of the three largest habitats, Seaton focused on the Innoko River area even though it was farthest from the road system.

"Even the barge trip is 1,000 miles to get to the Innoko," he said. "But Innoko people consistently supported the project."

While people in other areas thought the introduction of bison might interfere with potential oil and gas development, Shageluk and lower Yukon residents always said yes when asked about the return of wood bison.

Seaton found that others liked the idea too. With a budget too small to get 130 animals from south of Anchorage to the middle of western Alaska, he begged for help. 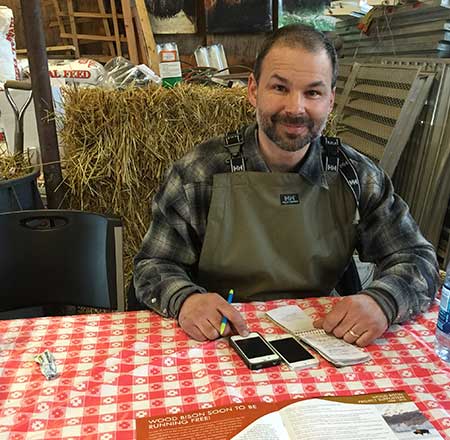 "People stepped up in every way," Seaton said.

"I think everybody likes wood bison," he said. "People like the idea of restoring a native species to Alaska, filling that hole in the ecosystem. It's the last big animal to come back to the U.S."

Things haven't been perfect for Alaska's newest wild bison. A few animals died after relocation: some from stress, others fell through rotten spring ice. Big snowfalls or ice storms in the area could make it hard on animals that reach their food by sweeping away snow with their woolly faces. But the stately beasts are back on the landscape, in one of the few places on the globe that could accommodate them.