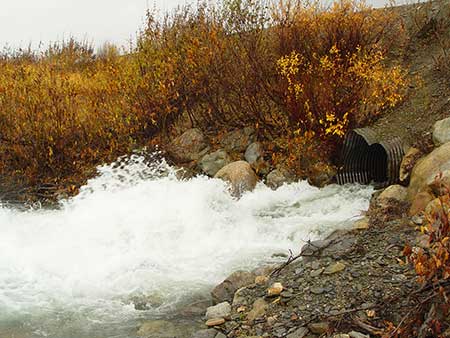 An undersized culvert on the Seward Peninsula during a high flow event.

When you drive over a salmon stream do you give much thought to how fish pass underneath the road? The Fish Passage Improvement Program does! Even in a state as sparsely populated as Alaska, streams and roads cross paths many thousands of times. In the Big Lake drainage near Wasilla there are more than 100 stream crossings; Chester Creek in Anchorage crosses the road almost 30 times. Each of those crossings has the potential to delay or prevent the migration or “passage” of fish. Run by the Alaska Department of Fish and Game (ADF&G) Division of Sport Fish the Fish Passage Improvement Program provides funding, technical expertise and other assistance to fish passage projects around the state.

One of the most important activities of the ADF&G Fish Passage Program is assessment. The vast majority of barriers to fish passage in Alaska are culverts, with only a very small number of dams, so assessment has concentrated on road crossings. The Fish Passage Program began assessing road crossings in 1999. To date, assessments have been carried out at more than 2,500 crossings covering most of the state’s transportation network. Of those crossings, 1,192 are believed to impact fish movements in some way. The information is used by restoration groups planning replacement projects, by road managers planning road upgrades and for watershed assessments and other decision making tools. All of the assessment data is available in an interactive map. 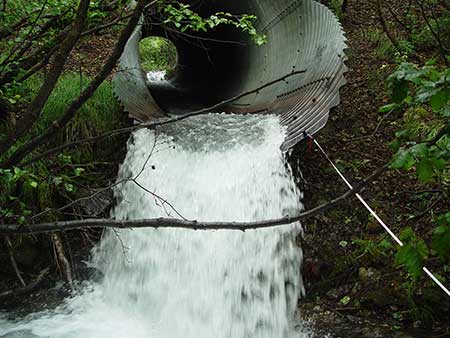 This perched culvert in the Mat-Su Borough was probably installed directly on the stream bed but the outlet has scoured away and now it is perched over four feet above the stream bed. Any replacement project will be more difficult as the stream bed is now at a different elevation above and below the road.

Roads cross streams via a bridge or a culvert. Bridges generally span the entire channel and have little impact on the stream or on fish movement. Culverts are large metal pipes that water is channeled into and flows through. Culverts can also work well for fish but only if they are sized and installed correctly.

When many roads were initially constructed the road builders gave little or no thought to aquatic life or to the movement of floodwaters, gravel and woody debris down a stream. Instead they installed the smallest culvert or set of culverts they thought would move the water from the stream underneath the road. A crossing structure designed this way, that is undersized relative to the stream, will concentrate and speed up the flow of water in much the way pinching the end of a hose with your fingers will. This often means the water in the culvert is too fast for fish to swim against. Over time, the concentrated flow coming out of the culvert will wash away the bed of the stream and the culvert will become perched above the stream bed. Often these culverts would wash out in a flood and be replaced by larger and larger pipes until they stopped washing away. However little was done to correct the existing impacts and many older culverts are set too high or too low in relation to the stream or in poor alignment with the direction of flow. 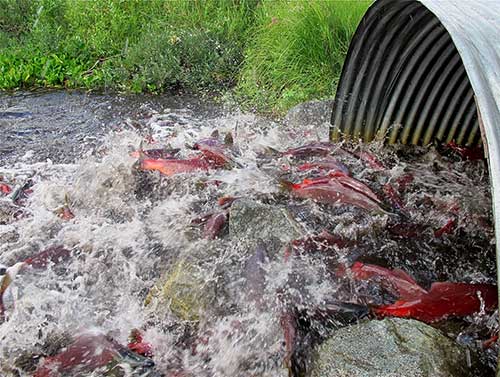 Salmon are the most well-known migratory fish in Alaska but many other species must make seasonal migrations in freshwater to complete their lifecycle. There are 55 species of Alaskan fish that spend at least part of their lives in freshwater. This list includes Arctic grayling, rainbow trout, sheefish, many whitefish species, lamprey and starry flounder. Assessments focus on impacts on juvenile fish and weaker swimming resident fish like grayling. Adult salmon can often pass through culverts because they are large and strong, however this does not mean that the culvert has no effect on fish movement.

Many existing culverts are replaced and upgraded during routine road maintenance operations, but ADF&G and their partners also carry out targeted projects using fish passage funding. A variety of criteria are used to prioritize crossings for restoration funding. The criteria vary but generally include: the severity of the impacts to fish movement, the amount and type of habitat above a barrier, species of interest or special management concern and the cost of replacement. To date ADF&G and their partners have replaced or removed 38 crossings, providing unimpeded access to over 95 miles of stream habitat and almost 2,000 acres of lake habitat. In Alaska to date, there have been 127 fish projects using fish passage restoration funding on state and locally owned roads and approximately 250 on US Forest Service land. 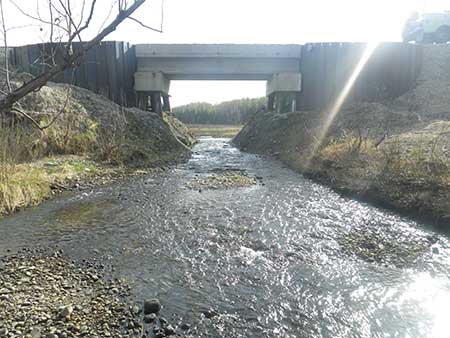 Sunshine Creek is a tributary to the Susitna River and only crosses one thoroughfare, the Alaska Railroad. It supports coho, Chinook and sockeye salmon. The existing culvert was very undersized relative to the creek and installed at a steep angle creating high velocities that were difficult for fish to pass. It had washed out in the past. The narrow opening of the culvert also created an easy place for bears to catch adult salmon moving upstream to spawn. In 2012 the culvert was removed and replaced by a bridge and the downstream channel was restored to its natural width and depth. ADF&G partnered with the Alaska Sustainable Salmon Fund and the Alaska Railroad to carry out this project.

Many culverts that are barriers to fish are also undersized and prone to failing or plugging with debris during floods, creating problems for maintenance crews. Replacing a road crossing that poses a problem for fish and public safety a win-win situation.

In addition to replacing culverts the Fish Passage Program partnered with the US Fish and Wildlife Service Fish Passage Program to create and offer a workshop on Fish Passage for engineers, biologists and others in the field. Since 2010 11 workshops have been offered in Anchorage, the Mat Su, Kodiak, Fairbanks and Juneau and over 400 people have attended. 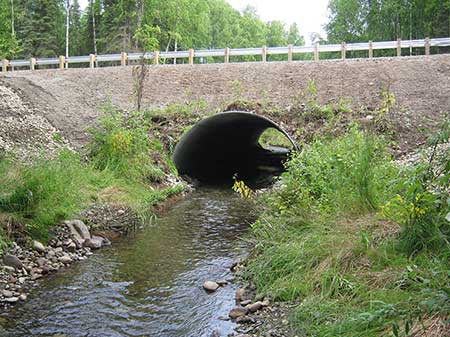 Caswell Creek tributary at Hidden Hills Road, shown after culvert replacement added a fish-friendly culvert in the summer of 2012. Partners on this project included the Matanuska-Susitna Borough and the U.S. Fish and Wildlife Service. Coho salmon use this creek for spawning and rearing and an adult salmon was observed upstream of the culvert three months after replacement. Salmon had not previously been recorded upstream of the road.

In 2013 the Fish Passage program began carrying out direct observation of juvenile coho and Chinook salmon before and after a culvert replacement in the Montana Creek watershed. This is the second study carried out by ADF& to directly observe the effects of replacing an undersized culvert with a stream simulation culvert. The study will be complete in 2016 and will improve our understanding of the impacts of barriers on the movement of small fish.

For additional information or to see more examples of fish passage restoration projects please visit our website or if you would like to meet with staff to discuss your project, please email Division of Sport Fish RTS Habitat Biologist Gillian O’Doherty at Gillian.odoherty@alaska.gov