End of the Road Angling
Shore fishing on the Homer Spit 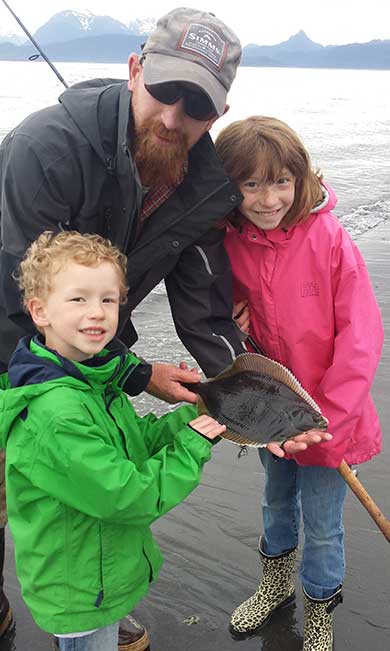 As soon as the small piece of cut herring fell beneath the undulating surf, an aggressive pull at the end of the line throttled my attention like freak thunder on a calm afternoon. I pull back. Hook set. Drag wheeling out echoes across the dark sand beach. It’s 10 a.m. and a light rain hovers; clouds shroud the southern distant mountains across Kachemak Bay, while somewhere north the sun burns a curtain of fog skipping small fitful beams across the water. The scent of diesel rides slowly on the air, emitted by a hundred-yard-wide cruise vessel vacating port.

A bald eagle, modeling for tourists on a large leg of drift wood quietly rises, claws a wave and lifts a dead fish washed ashore. It’s probably one of the many nesting above the bustling campground a 30-second flight from here. It’s July 4. Momentary symbolism. My wife is late in reaching her cell phone and captures nothing more than a blurry spec in flight across a cotton sky. More opportunities to come. The beach is not lacking in the presence of eagles.

This is the second year in a row my family and I have been in Homer over the 4th of July. We’re not the type to schedule annual vacations to one particular location. Alaska is far too immense to pigeon-hole one vacation destination on a given calendar day and leave the rest of the trail wanting wear. In fact we ended up here this year by poor planning and passive happenstance. Our plan was to catch the ferry over to Seldovia. Spend the day walking through the small town, geocaching, taking pictures; find a small pub and have a beer. But we were late on arrival and watched from shore as the ferry made wake. Watching this, I thought of how desire and action don’t always coincide. As if like time and tide, the perpetual pull on the ocean blue day-after-day, we are driven by an attempt to reach for something unknown that refuses to wait for us to catch up as we work, plan, pack, leave, fight traffic, radio silence and road construction, and at the end, when we stop driving we find rest for a weekend at a campsite far away, under a sky that rarely darkens this time of year.

Homer, Alaska is at the end of the Sterling Highway, roughly 200 miles south of Anchorage. Literally at the end of the road. The area is known commonly as, “The halibut capitol of the world.” Thousands come each year to partake in the exceptional fishing opportunities afforded in the Homer area. And while it is often best to target halibut off shore, some great fishing opportunities exist where anglers can be successful fishing from shore. 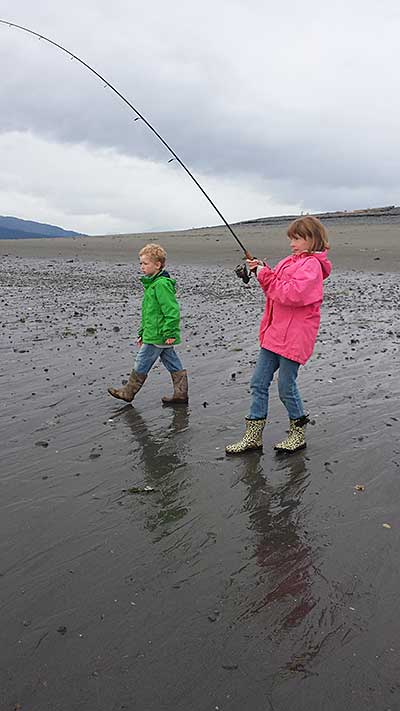 Fishing at the Lagoon is often best on incoming tides when fresher fish are more likely to arrive. However, fishing at low tide can be effective with bait fished under a bobber.

Another option for anglers who would like to target king salmon from shore is the Halibut Cove Lagoon, which is a short boat ride from Homer. King salmon return to Halibut Cove Lagoon in early May with the run continuing through early July. Also accessible via boat from Homer is the Seldovia Bay and harbor area. Most king salmon return to the Seldovia harbor and nearby slough. The run beings around mid-May and typically ends in late June. Spinners, herring and plugs work well when fished in the slough. Trolling herring or lures outside the Seldovia harbor is effective early in the run, while casting bait, spinners or spoons works well later in the run. ADF&G stocks king salmon each year in both locations.

People often kayak out of Homer and there are anglers who pick up halibut and salmon just off shore from their kayak. Some anglers try fishing for halibut from shore and while it’s not too common, halibut are occasionally caught from the beach. 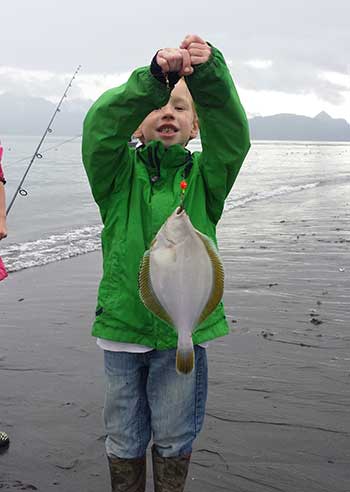 After about the fifth fish, a respectable-sized sole, my six-year-old son had had enough. He was tired out from doing battle with the highly-energetic species of fish found in the saltwater at Land’s End. My daughter, 10, fared a little better and landed maybe a dozen before she handed me the rod. I continued to fish and they enjoyed getting to release the fish from the hook back to the water. They wanted to keep a few. Take them home. Cut them open. Study the stomach contents. Eat the flesh. It’s what we do with fish. I declined, saying to them that while these fish are fine to eat, some of the cod and pollock tend to have worms in their flesh and I didn’t want to spend the time cutting them out.

Others on the beach kept what they caught. Stringers full of walleye pollock, Pacific cod and various types of sole. Take what you’ll eat. Winter is coming.

The beach. The light rain. A common version of summer weather, a slice of coastal Alaska. Fish on.

In most fishing situations with my family I’m the one who outlasts the group. Too rooted to reel up and leave the bite. My wife jokingly accuses me of being stricken by some form of obsession marred by scale and water. I don’t believe it. But maybe she’s right, because after 30 or 40 fish I’m not ready to leave. She is.

I’m left on the beach. The constant hum of thick waves diving on small stones. Few people around. My hands drip with cold saltwater. Small iridescent herring scales cling to the pores of everything I’ve touched. The bait is almost gone. I’ll stop when it is.

Time slows, even stops at the water’s edge. Maybe that’s it. No correlation between now and then. Kids fishing. Us together. Missing the ferry wasn’t such a bad deal. When the only thing that makes any sense is to forego the schedule of routine and reach for the experience of finding solace somewhere at the edge of water, then stopping at the end of the road is just the beginning of arrival.

Ryan Ragan is a writer and avid outdoorsman; and an information officer with the division of Sport Fish, based in Anchorage.