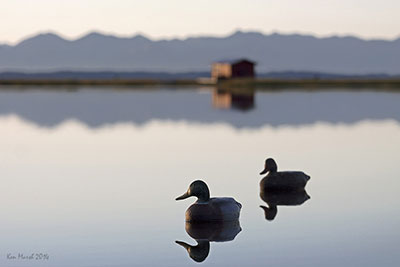 We’d set up our blinds the evening before, Begich and I splitting up to take opposite sides of the pond. For more than an hour we’d worked quietly, cutting sedges and weaving them into our canvas blinds to better blend in. Around us, the flats sprawled like a water-soaked prairie, banked by Cook Inlet to the south, overseen by Mount Susitna to the west.

As we’d worked, the setting sun flickered behind passing flights of ducks. Pintails and wigeons rocketed by in groups of 12 to 20 and more. There were mallards, too, and gadwalls, shovelers, a mixed bag of divers, and teals dipping and rolling in massive flocks as they sped low over the marsh.

Our blinds came together slowly because we kept stopping at the hiss of wings and the sight of birds dropping in to land on the pond. On the horizon, way out on the tidal mud flats, Canada geese rose in dark, noisy smudges.

That was yesterday. Now we’re on the threshold; opening morning of Southcentral Alaska’s waterfowl hunting season is only minutes away. My fingers are cold, but I’m not complaining. The birds are here, our decoys are out, and it seems we’re on the verge of a very good day.

Alaska’s wetlands produce, on average, about 12 million ducks and more than a million geese each year. Waterfowl that nest here contribute to all four North American flyways –Pacific, Central, Mississippi, and Atlantic – and are locally pursued by some 5,000 hunters who annually harvest around 70,000 ducks and 7,000 geese.

Overall, North America’s duck populations last year were strong at 49.2 million birds, according to the U.S. Fish and Wildlife Service, and this summer’s figures indicate populations remain robust, having increased slightly to 49.5 million. In fact, the continent’s 2015 duck population is 43 percent greater than the long-term average, based on surveys conducted yearly since 1955. That’s good news for hunters nationwide and early data specific to Alaska suggest 49th State duck and goose hunters can also expect good to excellent shooting this fall. 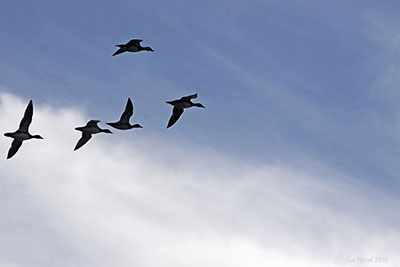 A flock of wigeon passes overhead on the Susitna Flats. North America’s 2015 wigeon estimate is 3 million birds, according to the U.S. Fish and Wildlife Service – basically unchanged from 2014, but still 17 percent greater than the long-term average of 2.6 million.

“The boreal region and Alaska exhibited drier conditions, but an early spring and lack of flooding should aid waterfowl production,” the USFWS reports in its July 2, 2015, Trends in Duck Breeding Populations 1955-2015.

Dan Rosenberg, state waterfowl coordinator for the Alaska Department of Fish and Game, was still waiting at press time for local survey data, but agreed that conditions in Alaska look good for a productive fall.

“An early spring usually bodes well and I don’t think the lack of snow (last winter) will do much,” Rosenberg said last month.

“Things were so wet last year in the Interior that now it may be closer to normal; and with less spring/summer precipitation, flooding shouldn’t be a problem as it was last year in some Interior locations.”

Other highlights of the USFWS report concerning ducks common to Alaska include the following statistics for North America overall:

I killed my first duck, a pintail, at around age 10 with a bolt action Ward’s Western Field .410. We were pass-shooting in the Chickaloon Flats south of Anchorage across Turnagain Arm and the marsh grasses were white with early October frost. Just ahead of winter, ducks and geese were moving in large numbers. I’d missed several shots at ducks and Doug Kolstad, an Anchorage schoolteacher and family friend, kept whispering “lead ‘em!” and “swing through, don’t stop your swing!” 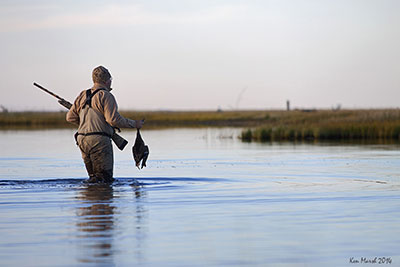 Robert Begich returns to his blind with an opening-day mallard.

Kolstad’s advice finally gelled as a low-flying wedge of pintails sailed overhead. I picked a bird at the head of the flock, pulled the trigger, and was delighted when a duck three birds back folded cleanly and plummeted from the sky. I ran to retrieve it and still recall the bird’s sleek contours, the iridescent bronze-and-green speculums at the base of each wing, and its blue-gray feet and bill.

Today I shoot a 12 gauge, which is quite an improvement over that little, old .410. My shotgun is nothing fancy, just a simple, sturdy Remington 870 with a 26-inch barrel fitted for choke tubes. The 12 gauge is a waterfowl standard – though a few goose hunters are fond of their long-barreled 10 gauges, and the 20- and 16-gauge contingents remain reasonably represented among waterfowlers in general. Opinions on shot sizes and loads, however, vary widely.

The toxic lead shot of my youth was banned for waterfowl hunting in 1991 because birds were ingesting the spent pellets and dying, particularly in areas where shooting was concentrated. Lead shot has since been replaced by nontoxic alternatives such as bismuth, tungsten, and steel. Many hardcore waterfowl hunters seeking the best shotshell options have become students of the newer nontoxic metals’ velocities, pattern densities, and knock-down energies at various ranges. Shot materials such as bismuth are heavier than steel and deliver better pattern densities and greater impact at longer ranges, but tend to be much more expensive. Non-toxic shotgun shell costs currently range from around $13 to $50 per box of 25, depending largely upon shot material.

Through trial and error over the last quarter century, I’ve come to prefer standard 3-inch shells shot through a modified choke and loaded with 1 ¼ to 1 1/8 ounces of No. 3 steel shot. For hunting ducks in nearly all situations – over decoys, pass shooting and jump shooting within reasonable ranges – I’ve had particularly good success with shells loaded for velocities of 1500 to 1550, though velocities of 1350 to 1400 work perfectly well in most situations, especially over decoys. In quality brands, these loads drop ducks neatly and are generally available at the more affordable end of the price range. 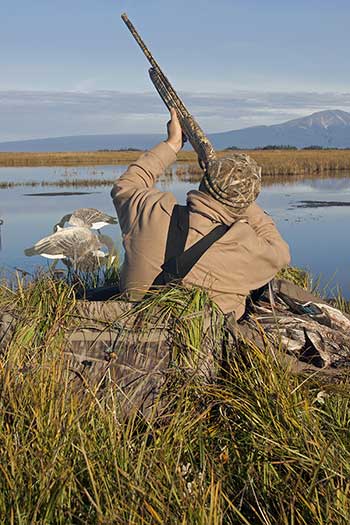 Robert Begich takes a shot at ducks from his layout blind, well camouflaged with resident sedges and placed among his decoy spread.

For geese, I’ve done well with steel in BB, though Begich – who spends much more time shooting geese and brant than me – favors No. 2 shot in a brand that incorporates a combination of steel with nontoxic tungsten alloy, nickel, and iron similar in density to lead. Again, many options exist, and the top, final choices may be decided by what a hunter can most effectively and affordably shoot.

Back on the Susitna Flats, legal shooting light is glowing from behind the Chugach Mountains to the east and ducks flying fast in all directions are silhouetted against the pale morning sky. It’s time. I tighten my grip on the shotgun, run my thumb lightly over the safety so I’ll be able to find it when the first birds come.

Suddenly, a flock of wigeon appears. They’re coming straight on, just off the deck and directly over my decoys. I just have time to bolt upright in my blind, choose a bird, cover it with my barrel, and squeeze. The 870 roars and the duck crumples, somersaulting into the grass to the side of my blind.

Now the sky fills with waterfowl of all kinds. A small bunch of ducks catches the corner of my eye to the left, a group of white-fronted geese yips and yodels just out of range to my right, and a flight of pintails is headed directly for me. Then, from across the narrows, Begich opens up with his Beretta semi-automatic.

In the hunting world, dedicated waterfowlers are recognized as a breed apart. Passionate about their sport, they spend off-season months shopping for decoys, shotguns and calls; touching up their spreads with fresh paint, adding new cords and anchors; and scouting local wetlands for promising new hunting hotspots. Indeed, the hardest-bitten can seem to have one-track minds. At any given time, say, while walking down the street or crossing a grocery store parking lot, hardcore waterfowlers will instantly note any passing duck or goose, identify it by species, then follow it with an imaginary “air shotgun” where every shot (imparted with a whispered “boom!”) is well placed and followed by a clean kill. 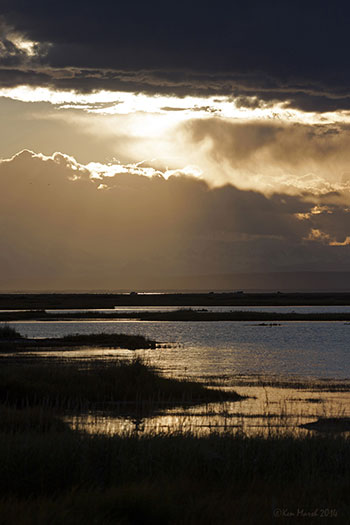 “Fowl” weather: A squall settles over the Susitna Flats at sunset.

Robert Begich is that kind of waterfowler. Long before hiring on with the Alaska Department of Fish and Game – he’s now the Kenai area sport fish biologist – Begich hunted ducks and geese along the Mississippi flyway in his home state of Minnesota. For him, waterfowl hunting was love at first light, and he’s since pursued his obsession across the country, shooting ducks in flooded timber way down South, over the potholes around arid Moses Lake in eastern Washington, and across Alaska from the Kenai and Susitna flats far west to Cold Bay.

At the sound of Begich’s shot a mallard folds from a flock of five and falls into his decoys. There’s a loud splash, then a shout and a laugh – the guy is in his element. By the time I turn back to my own spread, those pintails are on top of me.

And so the morning goes: Fast action on ducks; birds appearing, flaring, falling; the salty scent of burnt powder mingling with the rotten-eggs smell of the swamps. We will fill our daily duck limits within an hour. After that, we’ll clean the birds, stop at our shack for breakfast and then pack up Begich’s Canada goose silhouettes for an afternoon shoot far out on the mud flats.

Later, hunkered in our goose blinds, Begich will share with me his dream of a perfect world. It’s a place he talks about sometimes where waterfowl hunting comes first; where time begins in Southcentral Alaska on September 1, a half-hour before sunrise and never stops. It’s a world where a guy can throw his obligations to the wind and follow the migrating birds as they sweep south to Washington, Oregon, California … and beyond; where every morning is opening day, the skies are never empty and good duck dogs live forever. In other words it’s a world cut special for a passionate breed of hunter, the hard-headed, hardcore few: Waterfowlers like Robert Begich and me.

Ken Marsh is an avid hunter and public information officer for the Division of Wildlife Conservation in Anchorage.