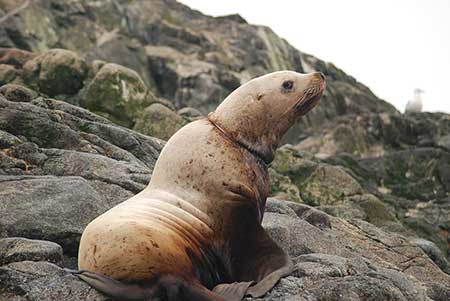 A Steller sea lion encountering trash in the ocean may be enticed to investigate, but minutes of play may lead to a lifetime of hardship, or worse. A loop is especially bad and can become a permanent noose resulting in lacerations, infection, strangulation, or drowning.

Worldwide records indicate over 200 marine species have become entangled or have ingested marine debris including 26 marine mammal species. Entanglements in Alaska are likely undercounted due to short field research seasons and a large, mostly unpopulated coastline. During regular reproduction and survival surveys at haulouts and rookeries throughout Southeast Alaska between 2000-2014, the Alaska Department of Fish and Game (ADF&G) Steller sea lion research program documented 330 sea lions of both sexes and all ages with neck entanglements. Plastic packing bands (also called packing straps) accounted for about half of all entanglements, followed by large rubber bands (about one third of the animals); the remaining animals were entangled in net, rope, and monofilament line. 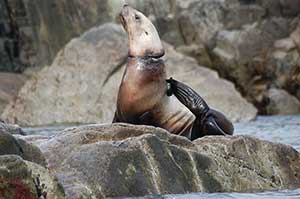 Packing bands have many uses - from securing boxes of flat screen TVs to holding together boxes of fishing bait. ADF&G encourages people to Lose the Loop! - by simply cutting and responsibly discarding unwanted packing bands and other loops. Use of biodegradable products or those with less packaging can also reduce entangling trash in the ocean.

“Marine debris is a human-caused, easily understood problem that can be reduced by making the right choices when disposing of unwanted man-made materials,” said Sue Goodglick, an ADF&G employee who works on entanglement outreach. 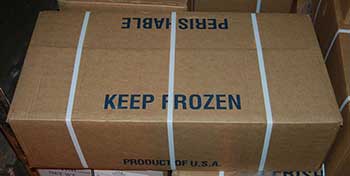 Packing bands on a bait box.

ADF&G and the multi-agency Pinniped Entanglement Group have a 30-second Public Service Announcement (PSA) airing on KTUU Channel 2 through August. The PSA was developed using NOAA grant funds and airtime was provided by the SeaWorld & Busch Gardens Conservation Fund.

For those animals already entangled, ADF&G and the National Marine Fisheries Service, in collaboration with Marty Haulena at the Vancouver Aquarium in British Columbia, have ventured into the relatively new realm of capturing and disentangling animals. ADF&G-led disentanglement captures in 2013-2014 resulted in two male Steller sea lions successfully darted, immobilized, and released. While a packing band encircling a subadult male’s neck was removed, a packing band on another adult male was too deeply embedded for safe removal without further injury. 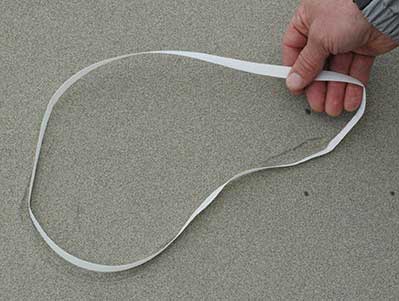 A white plastic packing band on a beach. Cut all loops or bands and dispose of them properly to keep marine debris out of the ocean.Photo by Kim Raum-Suryan

“Capturing and disentangling animals grabs public attention, but these attempts are expensive, not always successful, and risky business for both animal and rescuer – prevention is the real solution” said Goodglick. “By sharing our research on marine mammal entanglements and encouraging change we aim to reduce ocean trash and the frequency with which it injures or kills wildlife.”

More information on entanglements, including the PSA and 11-minute movie produced in 2008 by ADF&G and Sea Gypsy research is available on the program’s webpage. While visiting the site please take an online survey during June to help provide feedback to the fund for the airtime contribution.