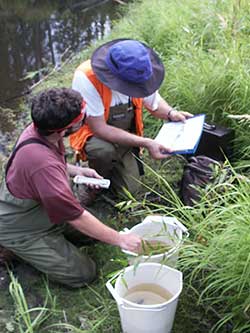 Before Alaska became a state, territorial laws were in place to protect anadromous fish streams. Anadromous fish are born in freshwater, migrate to saltwater to live most of their lives, then return to freshwater to spawn. These include salmon, trout, char, whitefish, lamprey and smelt.

The Catalog provides a legal listing of water bodies important to the spawning, rearing, or migration of anadromous fish. The Atlas displays maps showing the location, the anadromous fish species found, and the life stages documented in those water bodies. The Catalog lists almost 19,000 streams, rivers, or lakes in Alaska and more are added each year. Based on thorough surveys of a few drainages, we believe that this number represents less than 50 percent of the streams, rivers, and lakes actually used by anadromous species in Alaska. 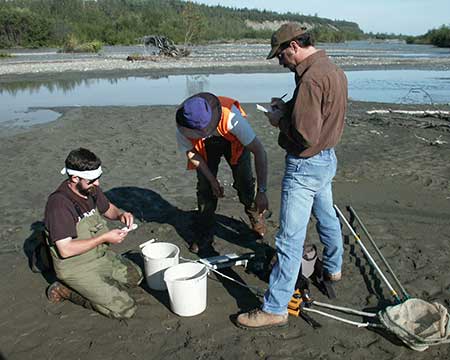 J. Johnson and Joe Buckwalter measuring fish with the help of the helicopter pilot.

Most nominations come from department fish or habitat biologists. Others are received from biologists with other state and federal agencies, staff of non-government organizations, businesses and individuals. On average, the department receives about 800 nominations a year. Many of the nominations from outside the department are the direct result of increased collaboration between the department’s Anadromous Waters Catalog and Fish Resource Permit programs. Recently, Fish Resource Permit stipulations were revised to include language requiring those who are issued a permit to work closely with the department to update the Catalog when new anadromous fish species or previously undocumented life stages of anadromous fish are found. This change, in combination with department’s efforts to thoroughly review permit data, has increased awareness of the anadromous waters program and led to an increase in the number of nomination submissions. 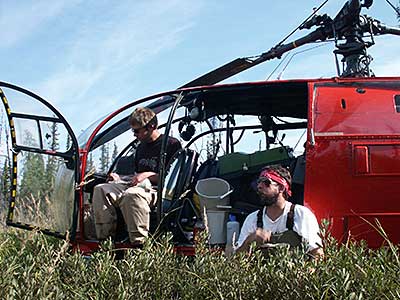 The author and Ryan Snow on a lunch break.

Nominations may be submitted for purposes of (1) adding new water bodies (2) adding species to previously cataloged streams, (3) extending species distribution in cataloged water bodies, (4) deleting water bodies or parts of them, (5) updating survey data on cataloged water bodies, or (6) revising stream channels, labeling errors, or identifying barriers to fish movement. Nominations should provide adequate information to substantiate the requested change. Once received, the Division of Sport Fish is responsible for reviewing and tracking anadromous water body nominations. The anadromous waters project biologist prepares mapping instructions, which are then reviewed by department staff prior to inclusion in the Catalog and updating of Atlas maps. Once revised maps are drafted and have undergone department, public, and regulatory review, they are adopted into regulation. Regulatory update of the Anadromous Waters Catalog is scheduled to occur once a year.

The divisions of Sport Fish and Habitat have separate, complementary responsibilities for the Anadromous Waters Catalog Program. The Division of Sport Fish maintains the biological and geographic data which are used to create the Anadromous Waters Atlas maps and Catalog. The Division of Habitat conducts the regulatory process for adopting the Catalog into state regulation. A representative from each division is responsible for the final authorization of each nomination. 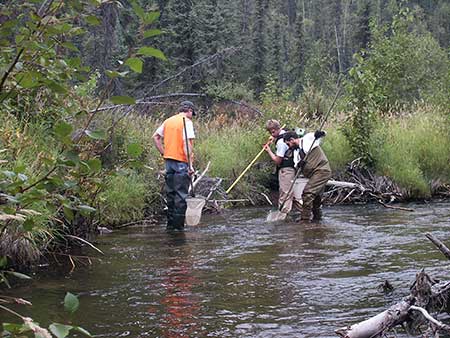 The author, Ryan Snow and Joe Buckwalter electrofishing to document the presence and species of salmon in a stream.

Presently Catalog data are available in hard copy, PDF and shape files or geodatabases that can be imported into mapping software such as ARCMAP, or Google Earth™. Mapping software has improved the department’s ability to make the Catalog available online. Website users can overlay and view resident fish and culvert location data using topographical or satellite imagery. Atlas maps and regional catalogs, along with shape files, geodatabase, and KMZ files are also available for download through the department’s web site. Additional information, downloadable copies of nomination forms, and all publicly available Anadromous Waters Catalog information can be found at: http://www.adfg.alaska.gov/sf/SARR/AWC/ .