CamSledding in Alaska:
A Better View of Scallop Habitat

By Gregg Rosenkranz and Amy Carroll 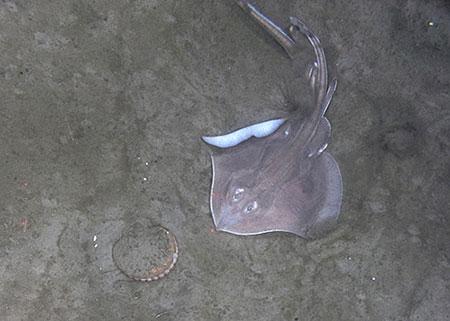 CamSled captured this image of a skate and a scallop. The field of view is about one meter.

CamSled is the Alaska Department of Fish and Game’s portable, towed, noninvasive underwater optical imaging system. It is the culmination of years of work by biometrician Gregg Rosenkranz and analyst/programmer Ric Shepard, who set out to use video for direct observation of weathervane scallops Patinopecten caurinus and their habitat. No affordable commercially available products met their needs, so they built the system themselves—a pioneering effort of doing more with less.

With a limited budget, innovative thinking, and inspiration from Woods Hole Oceanographic Institution's HabCam project, Rosenkranz and Shepard transitioned from a simple underwater drop camera to a high-tech, towed, digital system. The vehicle was named CamSled in recognition of HabCam, the first research group to apply tools from the field of computer vision to fisheries research.

CamSled creates a stream of high-resolution digital images of the seafloor and transmits the data in real time to the tow vessel over a fiber optic link contained in the tow cable. With towing speeds up to 4.5 knots and the ability to remain on bottom for hours at a time, the system can collect tens of thousands of seafloor images each day. In addition to camera and strobe lights that eliminate motion artifacts (blurring) in the images, sensors mounted on CamSled record water temperature and salinity, depth, sled altitude and aspect (pitch and roll), and a forward-looking sonar scans ahead for obstructions. Uses for CamSled include scallop abundance surveys, habitat mapping and crab research.

CamSled’s high-tech imaging components are mounted on a simple, rugged welded-aluminum frame that measures 10' × 6' and weighs about 1,700 pounds fully rigged. The vehicle contacts the seafloor on abrasion-resistant steel skis and images a 1-meter wide field of view. The heavy-duty packaging allows deployment from commercial fishing vessels and gives CamSled the ability to survive seafloor encounters with rock piles and lost crab pots. "We’ve flown over many lost  pots and smacked into a few of them without damaging the equipment," noted Rosenkranz.

ADF&G began underwater scallop video research following a workshop on scallops and scallop habitat held by the department in 1999. Funding for the effort was provided by the department from commercial licensing fees and was primarily used to charter ocean-going vessels for the research. The first system was a simple drop camera on a pyramid frame, followed by a light-weight towed sled designed by Brad Stevens of the Kodiak National Marine Fisheries Service (NMFS) lab. The old sled was towed from a trawl warp with no communication to the tow vessel, "So if something went wrong with the camera or lights, we had no way of knowing until we hauled back. That wasn't too efficient, so getting a real-time view of the bottom while towing was one of the big reasons for the upgrade," said Rosenkranz. 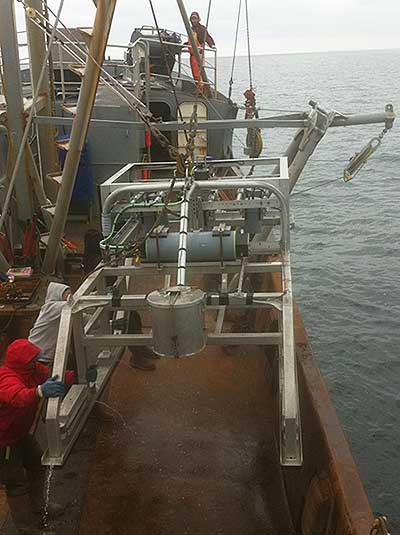 CamSled on board the vessel Provider, ready for deployment.

Rosenkranz met HabCam project leader Scott Gallager at an NMFS-sponsored workshop on underwater video in Seattle in 2004 and visited Woods Hole in 2005, where he saw demonstrations of  HabCam's machine vision camera, strobe lights, and fiber optic technology. Upgrades to the Alaska system started shortly thereafter, with funds obtained by skipping the 2005 survey and using the budget for equipment purchases.

"The only way we could afford this state-of-the-art imaging system was to have most of it built locally. We made friends with welders and machinists; Bay Welding in Homer, Kodiak Metals, Fred Nass Enterprises–these were the folks who built the sled, housings, winch, and U-frame," Rosenkranz explained. "Ric provided the electronics and programming expertise; he built the guts of the system with commercially available off-the-shelf parts on a desk at the Kodiak ADF&G office, then wrote the software to make it all work."

In 2006, many of the new components were mounted on the old sled frame and a survey was conducted off Yakutat. "Plenty went wrong," according to Rosenkranz. "There really wasn't enough room to mount everything properly on the old sled, but we got it on there, got it working, and towed until the skis were literally worn off. The winch brake wouldn't hold the weight of the sled while towing, so we lashed our brand-new armored fiber optic tow cable off on the back deck of Pandalus and towed like that for 100 kilometers."

Despite these problems, the researchers were impressed by the robustness of the new components and the quality of images obtained. By the following year, a new sled (Alaska CamSled) was built and rigged for the survey. "Ric and I were both commercial fishermen earlier in our careers, so we did what any Alaska fisherman would do–we took the basic shape of the old sled and made the new one way bigger, heavier, and stronger," said Rosenkranz.

Estimated cost to build the system, including winch, armored fiber optic tow cable, and U-frame in addition to the sled, housings, and electronics  was about $100,000. "Ric and I spent a lot of personal time and energy to make this all happen," said Rosenkranz. "If we had to contract out for software development, that alone would have been a show-stopper. Mark Hottman, retired captain of Pandalus, also played a big role in development and testing of CamSled."

CamSled: Where we are today

Improvements to the system continued over the next few years. A more powerful winch motor was installed in 2009, and a new camera with a larger imaging sensor was purchased in 2011. During a 2012 Tanner crab habitat survey off Kodiak, two strobe housing windows broke at depths of 250 m (820 feet), so an engineer from Woods Hole was consulted, and the housings were upgraded with thicker glass windows that allow the vehicle to safely operate to depths of 400 meters. "We're pretty happy with system performance now," said Rosenkranz . "In spring 2014, we installed CamSled on the commercial scallop vessel Provider for the first time and towed over 900 kilometers, collecting 2.2 million images of the seafloor in Kodiak scallop beds over a two week period.” Overall, CamSled has been towed more than 2800 kilometers and over 7 million images have been collected and archived at ADF&G-Kodiak. 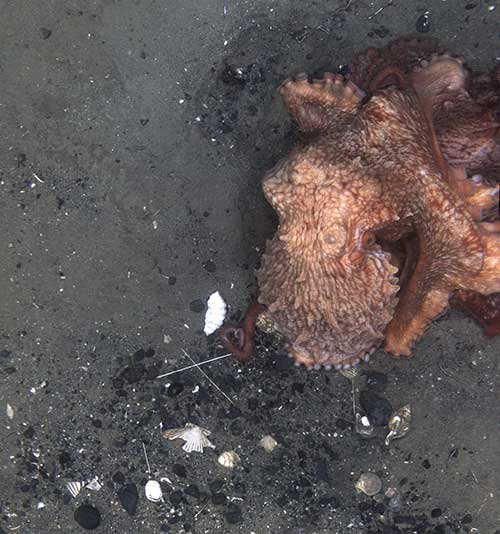 Review of all those images is time-consuming. In summer 2014, Rosenkranz and Shepard visited the lab of former ADF&G employee Dr. Brad Harris at Alaska Pacific University, where they installed a server for CamSled images and trained students in use of new browser-based software for image annotation that was developed by Shepard. Rosenkranz and the students have annotated subsamples of thousands of 2014 images, and scallop abundance estimates have been calculated for five Kodiak scallop beds from these data.

Years of CamSled research have convinced Rosenkranz that habitat considerations need to take a larger role in fisheries management. "Although our main focus has been scallops and scallop abundance, we see everything down there in its natural setting, and what I find most interesting is interactions between species and between species and habitat. For example, we know now that octopus and sunflower sea stars are major predators of weathervane scallops, and that catchability of weathervane scallops and Tanner crabs by dredges and trawls is affected by their behavior–they like to bury themselves in mud and sand substrate, especially when currents are strong, then emerge for feeding when current velocity drops."

Alaska's weathervane scallop fishery is managed by ADF&G in both state and federal waters with oversight by the North Pacific Fishery Management Council. The fishery is geographically widespread, with exploited scallop beds ranging from Cape Fairweather in southeast Alaska to the Bering Sea. It's also a relatively small fishery, with only 4 vessels participating in recent seasons and average annual landings of about 450,000 lb scallop meat over the past 10 years.

Since 1994, all commercial vessels fishing scallops in Alaska waters outside Cook Inlet have been required to carry onboard observers.  Scallop vessels pay for observer coverage, and ADF&G coordinates the program, trains the observers, and manages the data. In fact, Rosenkranz was hired by ADF&G in 1999 to analyze scallop observer data, and Shepard manages the database in his current position. The observer data provide fishery managers with information on size, age, and distribution of scallops and bycatch such as Tanner crab that is used in management of the fishery. Data transmitted by observers electronically from the grounds during fishing is also an important tool for monitoring fishery performance. 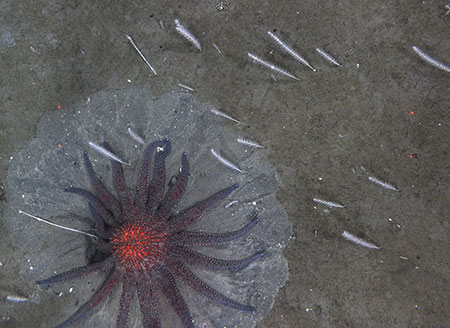 Scallop dredge surveys are conducted by ADF&G Central Region in Kamishak Bay (Cook Inlet) and at Kayak Island, and CamSled has surveyed scallop beds off Kodiak, Yakutat, and in the Bering Sea. However, cost and logistical challenges make annual surveys of all scallop fishing areas impractical, so continuation of the observer program is considered a priority by ADF&G staff involved with the scallop fishery.

CamSled: What does the future hold?

With the current atmosphere of tight budgets and limited research funding, what is the future of ADF&G underwater imaging? CamSled scallop surveys take place in spring during a few weeks before scallop season opens on July 1; CamSled spends the rest of the year in storage at ADF&G's Kodiak warehouse. "As much as Ric and I like CamSledding, it's a part-time gig for both of us, as we have other job duties that consume most of our work hours. We tried to obtain funding for another position to work primarily with CamSled dating back to 2007, but funds have just not been available," noted Rosenkranz.

One ironic aspect of this situation is that CamSled is a forward-looking project designed to save money by replacing people with cameras and electronics. "One of the major thrusts of HabCam research is development of computer image processing tools for these data that would greatly reduce time spent on image annotation," said Rosenkranz. "They've offered to share software with us, but Ric and I simply haven't had time to pursue it. We've already shown that CamSled can collect more information faster and cheaper than traditional trawl and dredge surveys, but it definitely takes time and resources to transition from people-based to computer-based research."

Rosenkranz is retiring from his position as ADF&G's scallop biometrician next month to pursue his other passions of "outdoor recreation, especially skiing, and bread baking." Will he miss CamSled? "It's been a big part of my life over the past 10 years, but I don't plan to hang around the dock waiting to help the project out unless they pay me for it," joked Rosenkranz. "Who knows, maybe I'll return at some point for more CamSledding–it's a great way to find out 'what's down there' on the bottom."

Amy Carroll is a publication specialist with the Commercial Fisheries Division in Juneau. She's written about sleeper sharks and other undersea predators for Alaska Fish and Wildlife News