A Wealth of Shells 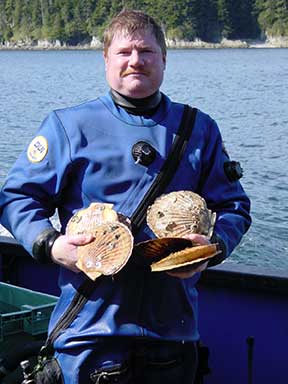 Everyone has at one time or another picked up a seashell and admired its beauty and design. Some will toss it back on the beach and others put it in their pocket to take home. These shells end up in boxes or on the living room mantle for display. For some the fascination with shells turns into a lifelong hobby. For me it turned into a never ending research project that meshed perfectly with a job as a Commercial Fisheries Biologist for the State of Alaska.

Collecting shells begin for me on the beaches of the Oregon Coast when even the smallest fragment of a clam shells was quickly pocketed. A move to Alaska, a college fisheries degree and a job with the Alaska Department of Fish and Game transformed weekend shell collecting into two decades of shellfish research. Collecting shells and invertebrates came naturally with a job that incorporated dive fishery research that’s cumulated in over 3,000 dives in Southeast Alaska. The lack of biological information on southern Southeast Alaska shellfish and the ability to collect invertebrates that were fantastic in form and function fueled my harvesting instinct.

Shell collecting jumped into high gear when I realized that so little information was available on the shells and shellfish I was collecting. Identification books would list a shell that I held in my hand as not occurring north of British Columbia. There was abundant information in British Columbia Canada and in the Gulf of Alaska but limited information in Southeast Alaska; and very limited information on invertebrate life in southern portions of Southeast Alaska. I continually found specimens out of their published ranges. 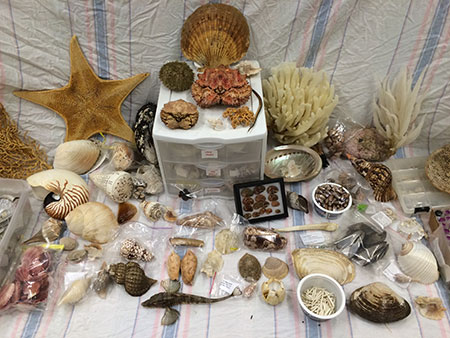 A sample of Scott's collection of shells, dried invertebrates and bottled specimens comprises 35,000 to 40,000 animals representing most habitats of the world.

My collection began to grow in earnest in 1990 while conducting underwater research. At the same time I began to document collection activities so that I could describe the amazing differences of flora and fauna in the diverse habitat types in Southeast Alaska. Collecting shells and invertebrates melded quite easily with my job as a fisheries biologist and I collected 3,000 to 4,000 shells annually. I expanded my collections to include sea stars, corals, crabs and small fish. I often spent weekends putting out collection pots and walking beaches at minus tides to collect invertebrates.

As my collection grew I began to find other researchers in the Pacific Northwest and then worldwide with similar research interests. I found a worldwide community collecting and doing research on Northwest shells and invertebrates. Before long I began getting requests for Alaska specimens from museums and universities both locally and internationally. One university Ph.D was researching a deep water bivalve and was paying hundreds of dollars for specimens collected from a submarine. I casually mentioned that I caught the same species in my shrimp pot and would send him all he wanted for the cost of shipping. That began an ongoing donation of thousands of shells and invertebrates to museums, universities, researchers, and shell clubs all over the world. Information sharing became even easier as the internet matured.

Tuskshells (Dentalium pretiosum) were used as money throughout many Pacific Northwest tribes going as far south as the Klamath Indians in California.

Eventually my collection leveled out around 35,000 to 40,000 shells and specimens. The only thing that kept my collection to a manageable size was constant donations to researchers and museums. In addition I started building educational displays and collections that were used in a variety of ways. I always enjoyed taking a box of shells, dried crabs and preserved animals such as octopus and squid into a first grade classroom to show them off.

Ensuring a valid scientific specimen isn’t easy. First, you must carefully collect your specimen (live is critical), making sure you have it labeled to document harvest location. Then you need to get your specimen home. When collecting on research vessels, I would wrap up specimens each night and put the bags of shells in the boat freezer until the plane ride home. It is critical to save a shells operculum if it has one. The operculum or “trapdoor” is a critical part of the shell and must be kept with the shell as an aid for identification.

Preservation is the next step. Most invertebrates can be frozen or placed into alcohol for later processing. Sea stars, corals, and small fish can be dried quite easily. Crabs can be injected with a preservation solution and allowed to dry using a fan. Shelled invertebrates can require work to remove the dead animal. Some shells are easy and the body falls out like in clams and limpets. Whelks need more work to remove all of the coiled body from the shell ensuring that the stink is gone. Attached barnacles and shell growth may need some scraping with a dental pick to ensure that the shell is clear of encrusting animals. Once the specimen is dried, it is then placed into a bag and labeled with date, location, substrate type, collectors name and genus and species. Some animals may be preserved in alcohol to allow for genetic analysis at a later date. Sometimes museums will send out a manual with directions on how they prefer their specimens to be preserved. 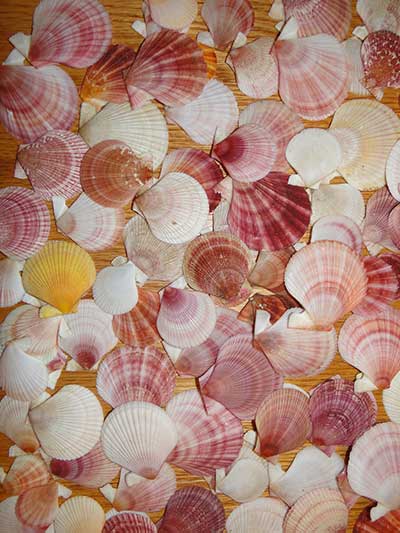 For many years I collected specimens while diving with the state’s research program. As I was working underwater I always had a small collection bag or open suit pocket to grab specimens that came within my reach. At the end of each dive day I would pull out my bags and empty my pockets of collected specimens. I would often have a list of specimens that had been requested by researchers and museums. To collect small specimens I would take a turkey baster out of my dive pocket and suck up small snails. This was always at the end of a working dive and was not always welcomed by cold dive buddies that wanted to finish the dive to warm up.

I also collected shells using other methods. I had a small trawl that I built, I used shrimp pots that I kept in the water most of the year, collected mud off of anchors, and beachcombed whenever possible. I also collected freshwater mussels and clams while taking breaks from aerial surveying and doing stream foot surveys. Small shells can also be found in the guts of large halibut other fish that are bottom feeders. 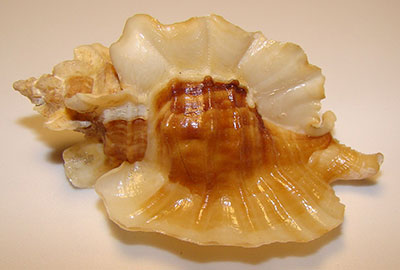 The leafy thornmouth (Ceratostoma foliatum) has three large frills that are aerodynamic allowing it to land right side up when knocked off of its rocky perch. A calcarous thorn on its underside discourages predators from breaking into its protected midsection.

Most shell collectors have elaborate shell cabinets that proudly display their treasures. My collection was always more about taxonomic research and education and my collection is stuffed in boxes and totes. In addition, grateful researchers have often sent me specimens of shells that they work with in appreciation for my help. This has enabled me to collect shell specimens from all over the world from more than 75 different countries and from just about every habitat type on earth.

Robert Louis Stevenson once said “It is perhaps a more fortunate destiny to have a taste for collecting shells than to be born a millionaire.”

I don’t have to worry about the millionaire part on my biologist salary, but I hope to share my taste for shell collecting with others for years to come.

Note: While picking up shells is fine, a sport fishing license and in some cases, a fish resource permit is needed to collect live invertebrates. See the Fish and Game tidepooling website for more information.

Scott Walker wrote about underwater research and monitoring and sea lion satellite tags in past issues of Alaska Fish and Wildlife News.