An AUV Journey on Kodiak Island

The AUV, better known as “Bee Yacht." Since her commissioning in May 2009, the AUV has been deployed on roughly 100 missions across Kodiak. Weighing only 45 lbs, she is easily transported to her launch points and retrieved from her final destinations.

A long, slender, yellow shape silently slices through the chilly waters of Karluk Lake on Kodiak Island. Is it a torpedo? Some type of missile? No! It is a YSI Ecomapper autonomous underwater vehicle, affectionately known as the AUV. She is a revolutionary tool for efficiently collecting geo-referenced limnological and depth data with the capability to also capture high-resolution images via side-scanning sonar.

The AUV was acquired by Westward Region Commercial Fisheries Finfish Research staff with an award from the Pacific Coast Salmon Recovery Fund in February 2009. She is the only Ecomapper owned and operated by a government agency in the United States.

The ultimate motivation behind the purchase was to improve our understanding of factors that influence sockeye salmon production that drives local fisheries. Specifically, catch and escapement are often the only available data for assessing escapement goals. However, those data often lack the contrast necessary to effectively model maximum sustainable yield. The AUV provides a suite of high-resolution habitat data that can complement the assessment of optimal escapement. A growing local interest in climate change and lake fertilization projects also increased the importance of understanding lake rearing conditions that impact sockeye salmon. 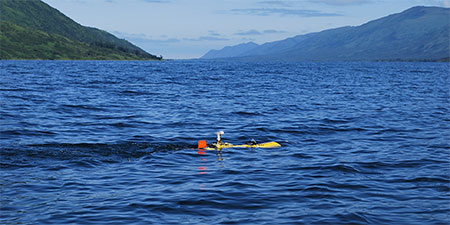 Since her commissioning in May 2009, the AUV has been deployed on roughly 100 missions across Kodiak, including in Karluk, Frazer, Red, Akalura, Uganik, Thumb, and O’Malley lakes. Weighing only 45 lbs, she is easily transported to her launch points and retrieved from her final destinations. Missions are first plotted on a geo-referenced image and then loaded onto the AUV’s onboard computer via its own wireless network.

Missions can be safely run for 5 hours at a cruising speed of 2.5 knots. Once she is launched, the AUV’s antenna, housing a GPS unit, guides it along the plotted course as long as she is not submerged underwater. On diving missions, that can go as deep as 200 feet, the AUV follows a compass heading to the next waypoint. Depth, temperature, dissolved oxygen, pH, chlorophyll, turbidity, and conductivity data are collected every second while the AUV sails on her mission.

Various depth, gain, and frequency settings may be programmed for scanning sonar images. Upon completion of a mission, she can park until manually driven to shore. All data are then easily downloaded over the same wireless network.

In conjunction with AUV missions, temperature, dissolved oxygen, turbidity, chlorophyll, and pH data have been collected using traditional sampling protocols requiring cumbersome meters, Secchi discs, van Dorn bottles, and lab processing time. However, these sampling methods yield information from a thin sliver of the water column and, it is well-known that the parameters that we sample are not uniformly distributed within a lake. Because the AUV can provide a spatial and temporal representation of temperature, dissolved oxygen, turbidity, chlorophyll, and pH, we gain a clearer picture of the variability within an ecosystem. 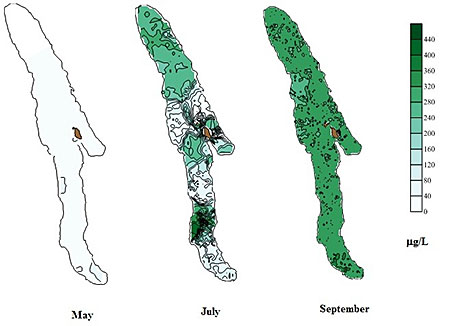 Subsurface chlorophyll concentrations in Karluk Lake from May to August, 2012.

Additionally, with the sonar images, we can potentially determine what defines preferred rearing locations. Fish presence data detected by the side scanning sonar can be overlaid on maps of the other data to show where fish reside relative to their rearing conditions.

Having operated the AUV for 5 seasons, we possess a wealth of data. Preliminary analyses have illustrated seasonal trends in physical conditions specific to location and depth in each lake. Additional analyses comparing AUV data to traditionally collected limnological data have also highlighted the seasonal patchiness and bloom timing of chlorophyll, vital to the zooplankton preyed upon by sockeye salmon. This patchiness would not be detected by traditional means of sampling at singular anchored stations in a lake. Of equal value, the georeferenced depth data has allowed us to update bathymetric maps that are over 30 years old. Using GIS software, we have subsequently been able to greatly improve lake volume estimates used in habitat-based optimal escapement models for the AUV-mapped lakes. 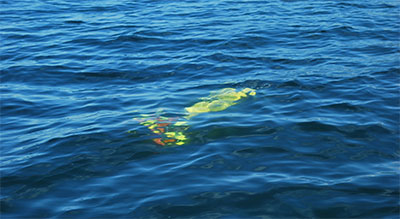 This groundbreaking high-resolution mapping by AUV, affectionately known as the Bee-Yacht, continues to strengthen the salmon science community in Kodiak. Biologists are excited for the opportunity to run the AUV in more Westward Region lakes and in nearshore areas adjacent to habitat disturbances. Beyond the research aspects, having the AUV has afforded multiple opportunities for positive community outreach. Cooperative relationships have been formed and nurtured with the US Fish and Wildlife Service, their Youth Conservation Corps, and local elementary school children who have been educated about resource stewardship and applied technology. These exciting research missions represent the next wave in environmental sampling and allow local fisheries managers and stakeholders to better understand salmon productivity, habitat, and how to keep both healthy.