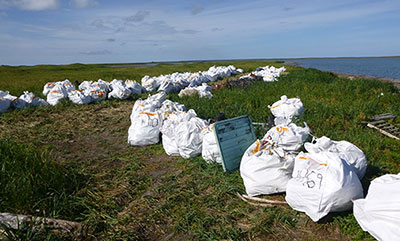 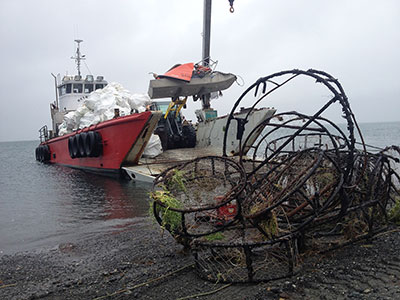 The rescue craft washed from the deck of the Kulluk drilling rig in 2012 when it broke free of its mooring and grounded on Kodiak. It was upside down on the beach, half buried in sand. Pogson said the additional debris included 30 or 40 black Japanese oyster floats, various giant chunks of plastic, and 84 crab pots.

“We had five of those Yokohama fenders that are used for big ships, they weigh 500 to 1,200 pounds each,” he said.

After the debris was hauled back to Kodiak in landing craft, volunteers were able to weigh it. Most of the weight was nets and line, floats and buoys, and fishing gear.

Tugidak (pronounced too-gee-dik) is a low, treeless island about six miles wide and 21 miles long; a series of bluffs rise above the beaches and the highest point is about 160 feet above sea level. Volunteers cleaned an 11-mile stretch of beach on the southeast side of the island, the north and west side of the island is designated as sensitive seal habitat and workers avoided that area. 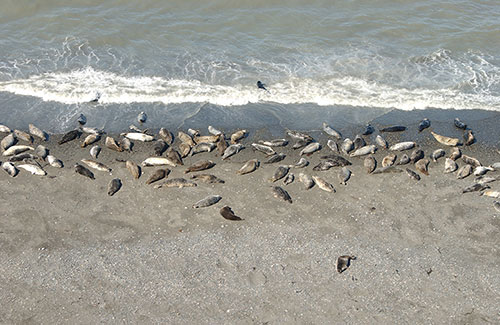 Harbor seals on the beach at Tugidak Island. Photo by Sue Goodglick.

The island is uninhabited, although in the past John Garber and his family lived on the island seasonally and operated a recreational mining claim. Garber’s claim was grandfathered in when the island was designated as a critical habitat area in the 1980s.

Biologist Sue Goodglick spent seven seasons on the island monitoring and surveying harbor seals, observing and photographing animals. She described the island as very quiet. “Solitude and seals, thousands and thousands of seals,” she said. “It was one of the largest seal haulouts in the world. It’s particularly important for pupping and molting. It’s a pretty special place for the animals.”

Surveys in the mid-1960s reported 20,500 harbor seals hauled out on Tugidak. Harbor seal numbers declined in many parts of their range during the 1970s and 1980s (as did numbers of Steller sea lions and fur seals). A survey in the mid-2000s counted 3,333 seals. About 80 species of birds have been documented on the island. 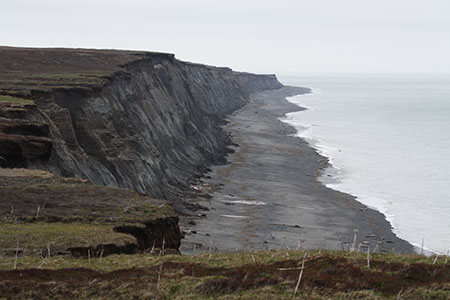 The north side of Tugidak Island. Photo by Sue Goodglick.

“A lot of people came and helped,” he said. “They left slack jawed and glassy eyed at the amount of debris.”

“We needed to get a special area permit for the project, and Fish and Game reviewed the project and provided lots of suggestions,” he said. “We used Fish and Game’s ATVs in the first year.”

Pogson said the project began years earlier when two volunteer crews in 2009 and 2010 removed nearly 10,000 lbs of marine debris from Tugidak's shores and interior low-lying wetlands. ITN recognized the opportunity for a bigger project and set the wheels in motion. 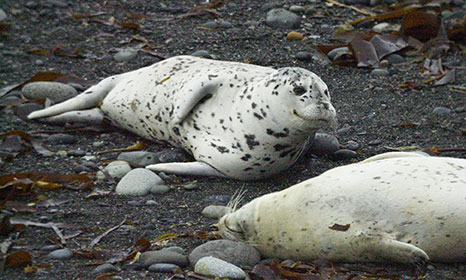 Harbor seals on the beach at Tugidak Island. Photo by Sue Goodglick.

The debris is now stored at a designated marine debris storage yard on US Coast Guard land in the Buskin River Valley on Kodiak, and will not be landfilled on Kodiak Island. Pogson said in the past, plastic had been shipped out for recycling in China, but that avenue is no longer an option.