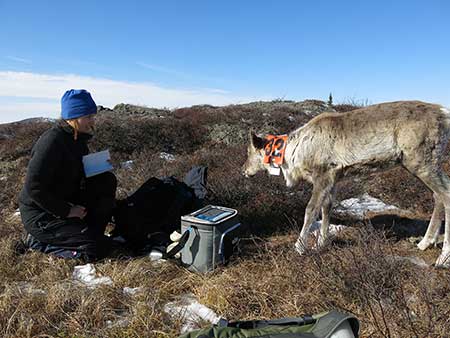 Wildlife veterinarian Marianne Lian is researching ways to make that process safer for animals and biologists, and spent most of the past year in Alaska focusing on a new drug combination to immobilize caribou. Lian is Norwegian and was awarded a Fulbright scholarship to work in Alaska from September 2013 through July 2014. Based in Fairbanks, she worked closely with Dr. Kimberlee Beckmen, the veterinarian for the Division of Wildlife Conservation.

“This is the first time we’ve had a Fulbright scholar do a post graduate research project with Fish and Game,” said Beckmen. “It was a huge help for developing better and safer drug protocols for wildlife. We were able to get a lot of research done, a lot more work than I could have done alone. We essentially got a second veterinarian.”

The term protocol is used because several drugs are used in combination. Lian and her Alaska colleagues Kimberlee Beckmen, Torsten Bentzen and Nick Demma investigated a new drug combination for helicopter darting to immobilize free-ranging caribou calves for radio-collaring.

Animals are often captured using drug-loaded darts shot from a dart gun. The drug combination provides the desired effect - alert and awake, but immobilized and lying down, relaxed and unconcerned. A good immobilizing agent takes effect quickly (the induction time) and can be reversed with a second drug that quickly counteracts the effects. 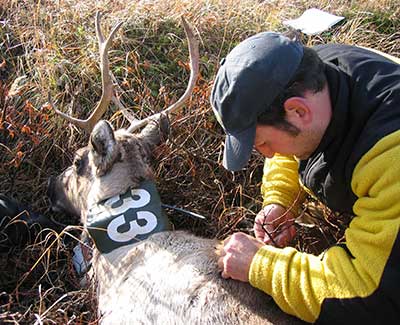 Wildlife biologist Lem Butler administers a reversal or antidote to a caribou before releasing it and leaving.

Ideally a drug is injected with a syringe into a docile subject in a controlled situation, and the dose is calculated according to the animal’s weight. It’s quite a different thing for a biologist in a helicopter to dart to a “free-ranging” wild animal, like a running caribou. In the course of her work Lian helped Fish and Game staff capture 45 caribou across Interior Alaska and 28 moose in the Yukon Flats area.

Before those wild animals were anesthetized, Lian and Beckmen worked with captive caribou at a research facility in Palmer.

“The point was to have a controlled set of circumstances to test the new drug combination,” Beckmen said. “You have everything on hand if something goes wrong.”

Lian was looking closely at induction and recovery times, and the welfare of the animal. “I’m monitoring how well the animal is breathing, looking at the oxygen uptake in the blood, and trying to find the best dose,” she said.

She’s been working with two drug protocols: carfentanil/xylazine, and thiafentanil/azaperone/xylazine. The combination of carfentanil and xylazine has been used for immobilizing moose and caribou in Alaska since 1986. Carfentanil is a synthetic opioid developed in the mid-1970s; it’s 10,000 times more potent than morphine. That makes it potentially very dangerous to people, and biologists are extremely careful handling the drug.

Thiafentanil is a similar drug and achieves the desired effect on animals but some studies indicate that it is safer for the people who handle it. The new drug combination works fast.

“The induction time is 3.6 minutes on average, similar time to carfentanil,” Lian said. “The antidote works faster than carfentanil, the recovery time 2.2 minutes.” 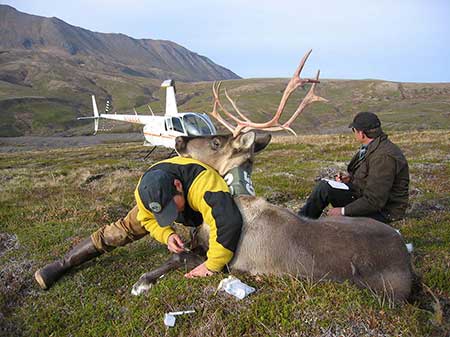 Lian said carfentanil and thiafentanil render the animals immobilized. Xylazine is a sedative, which provides relaxation. Without xylazine, the animals would be rigid and tense, and have rough inductions and recoveries. Azaperone is a tranquilizer, which causes the animals to be unconcerned and relaxed. Lian said another important reason for having a protocol of two or three different drugs is that the drugs potence each other, so you can use smaller doses of each drug, and reduce side effects.

“Our goal is to have them immobilized, but awake and alert and unconcerned,” she said. “However, when we dart from helicopters, all animals of the same age and sex get the same dose, so sometimes we'll have animals that are immobilized deeper than we prefer. Then they are not conscious, their head is on the ground and their reflexes may be depressed. In those cases we reverse the xylazine early to get them in a lower level of immobilization.”

One big advantage to the new thiafentanil drug combination is that while it uses the same reversal drug, also known as an antidote or antagonist, it requires only 1/10 as much, which saves a lot of money on the drug.

Lian said some studies have shown that the tranquilizer, azaperone, has an added benefit – it prevents hyperthermia and improves respiration. That’s important, since overheating (hyperthermia) is the biggest danger to the animal and the most common cause for capture mortality.

“Taking the temperature is very important,” Lian said. “These animals are built to conserve heat; you’re working with them and messing up their thermostat, so it’s important to watch their breathing, and keep the downtime as short as possible.” 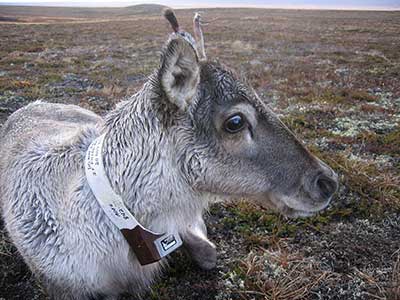 A caribou calf equipped with a radiocollar.

Administering oxygen to immobilized animals has not been common practice in field work in Alaska, but it should be, Lian said. It’s a relatively new thing, she said, and it’s become routine in captive animals and in brown bear captures in Scandinavia.

“It’s my wish that everyone use oxygen when an animal is down to improve their breathing,” she said. “It’s really easy, you just have a tube and put it up their nose and give them oxygen. It really improves and normalizes their breathing. When you are anesthetized in a hospital, they would never consider not having oxygen.”

Beckmen said it is becoming more prevalent in field work in the North America. “It’s a good practice. It’s an improvement in animal care and better for the animal.”

Before Lian returned to Norway at the end of July, her parents were able to visit her in Alaska. Her family still lives in Narvik, where she grew up, north of the Arctic Circle. Lian said she’ll continue to do wildlife capture work in Norway, and will be teaching about a three-hour drive north of Oslo in interior Norway at Campus Evenstad at Hedmark University College.