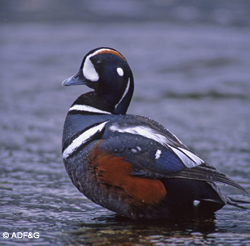 On a warm summer day, a pair of ducks bobs on the current of a clear mountain stream. The striking plumage of the male identifies the pair as harlequin ducks – sea birds that spend most of the year foraging for mussels and crabs in the intertidal zone. But these sea birds are far from the ocean. Harlequins come inland to breed on freshwater streams.

Streamside hikers encounter pairs of harlequins in early summer, when the birds are breeding and nesting. Most nests are built very close to water, on the ground in dense vegetation, among tree roots, or in rock crevices. But the colorful male spends just a few weeks inland; shortly after the eggs are laid he returns to the sea, leaving the female to raise the young. The availability of food in mountain streams may limit the density of nesting birds, so the departure of males may actually improve survival of females and their young.

Like many other ducks, harlequins are flightless for about one month a year when they molt and grow new feathers. Males molt earlier than females, generally in late summer after they return to the coastline, while the females and young are still inland.

In mid-summer, females with ducklings can be seen rafting through the rapids and gleaning aquatic insects from riffles and pools. Like the American Dipper, they will also walk underwater on the bottom of a stream, picking insects or salmon eggs off the streambed. They use the current to their advantage, angling themselves head-down so they are pressed against the bottom.

In late summer the females and young fly to the sea and join the males, favoring the same specific area of coastline where the birds spent the previous fall, winter and spring.
Biologist Dan Rosenberg of the Alaska Department of Fish and Game is studying harlequins. He’s looked at their movement and distribution, their staging areas for breeding and molting, and how they use their habitat.

Harlequins range along the Pacific Coast from the Aleutians to Oregon. Large numbers winter in the Aleutian Islands and the Gulf of Alaska Coast, throughout the Southeast Alaska Coastline and south to Oregon. A separate population inhabits Atlantic waters from Southern Greenland to New England. 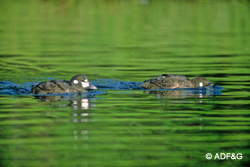 Rosenberg said harlequins tend to winter in the same, specific areas. But when it’s time to breed, they scatter. Rosenberg looked at harlequins in Prince William Sound and found that in the spring, some birds will fly more than 1,000 miles to breed in Siberia, while others travel just a few miles inland to nest on streams that flow into the Sound.

“Why go all the way to Russia when you have all these streams that are so much closer,” he said. “We thought they might migrate up the Copper River and nest on one of the many tributaries, but our initial information tells us that is not the case.”

Rosenberg found that many harlequin males simply don’t breed in a given year. Many still make seasonal movements, while others remain at sea year-round along the same section of coastline.

In 2001 and 2002, Rosenberg tracked 13 male harlequins from their wintering areas in Prince William Sound to their summer breeding and nesting areas, using small, surgically-implanted transmitters and satellite tracking. Males were chosen because they are larger than the females and better able to carry the transmitters.

“Two birds went from Prince William Sound to Russia,” he said. “One went to Chulotka in Eastern Siberia and stayed on the coast and molted, but didn’t breed. The other went up Anadyr River. That one flew over 2,025 kilometers - over 1,200 miles.” Another bird flew northwest, into the Brooks Range, and another flew southwest, into the Kenai Mountains

“They’re probably all over the map in summer, but they seem to go back to a fairly specific area to winter,” he said.

Harlequins seem to prefer more rugged and exposed rocky coasts than other ducks. They do well in turbulent waters, and they can swim underwater using their wings as well as their feet. Their skill negotiating choppy coastal currents serves them well in the summer when they move inland to freshwater streams.