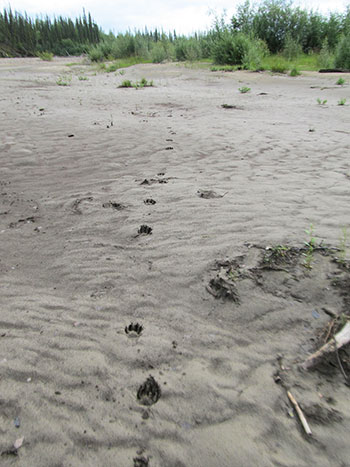 Here is a wolf trail where the wolf is in a gallop. Mike Taras photo

When I walked into the river meadow in Interior Alaska, I was not sure how things would play out. I knew that a moose got shot in the area and ran away. I knew that a few people had scoured the meadows and young aspen stands along the river for a few hours and found no moose. I got to the spot where the moose was shot and started looking around. There were a lot of moose and people tracks and trampled grasses. “Not good”, I thought. But after looking around for a bit I saw a track that stood out. It was real fresh and heading out of the area. It was a subtle but clear impression in the hard, grassy, river silt. The hooves were splayed, dew claws showing, indicating that the animal ran away. “This is our moose”, I said to myself. It was the only fresh track around that showed urgency. I found a few more of his tracks which provided a clear direction of travel and I called the other guys around. “This is him”.

We got on the trail which went from the meadow into the aspen stand. There were no clear tracks, but clear sign where the moose ran. The grasses were bent, the horsetails broken. It became obvious. We did not need to see blood to trail this animal, but the guys were behind me digging at the grass, looking for blood just to make sure… and to verify that it was wounded.

It turns out that the young bull was wounded and bedded down, hiding in some thick brush only a couple hundred yards away. He had been walked past earlier for sure but remained bedded. It almost worked for him.

Even in today’s high tech world one of the most fundamental outdoor skills, tracking, should not be ignored. I’m sure the above scene plays out every year for hunters around the state and there are probably many variations on the ending. Unfortunately not all animals drop over dead when shot, and finding them is not always easy. As we approach the fall season, let’s take a look at some of the ways tracking skills can make you a better hunter. 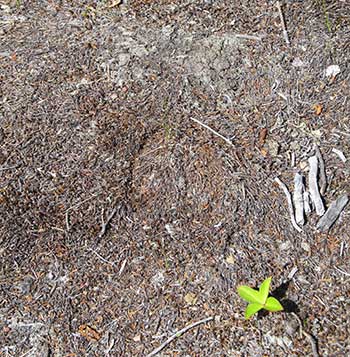 Here is a good picture of a moose track on some hard ground. It is not super obvious but once you find it you can see the distinct shape of the hooves.The track is in the center of the frame.

Recovering animals may be the most important reason to have good trailing skills. If you shoot an animal and it runs away you must be able to track it in order to find it.

Some things to keep in mind about recovering an animal:

One of the rules of animal tracking that my mentors have tried to beat into me is to keep my head up and look ahead for tracks, not directly down on the ground. This may seem counterintuitive but it really allows you to see tracks and sign much better, provides a perspective of the possible routes of travel, allows you to maintain momentum, and if you are tracking dangerous game, safe. When I was in South Africa trailing lions and rhinos with local trackers, this became a serious reality! South African Trackers don’t track with their heads down. 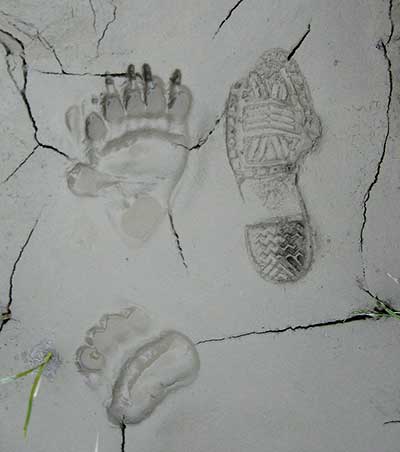 Brown bear tracks in Glacier Bay. That's a double print by the Xtra-tuf print and the front paw behind. The bear has stepped in the track of his front foot, superimposing or registering the rear footprint over the front paw track. Riley Woodford photo.

In addition, not all animals are going to bleed a lot when they are shot or bleed right away. A friend of mine shot a deer this winter after tracking it in freshly fallen snow (pure white coverage). The deer ran after he shot it. When he went to the spot where he shot the deer there were only a few hairs lying on the snow. Hmmmm… Did he miss it or maybe he just “skinned” it? This hunter followed the tracks and it was not until 20 yards or more that he saw a speck of blood on the snow, then more blood as he followed, then the dead animal. Imagine if there was no snow!

There are many other scenarios where animals are not going to give you much blood to find. Bears are notorious for not bleeding much. If you shoot a moose and the bullet mushrooms and lodges in the bone and muscle it may not bleed much either.

I’m not saying to ignore blood; it can help you and tell you a lot about the animal as you track it, but don’t rely on it only.

Tracking is like any other skill. Nobody mysteriously becomes a good tracker. It is just like a martial art; you have to practice to be good at it. This includes track and sign identification as well as actually trailing an animal. There are no shortcuts. Get out as much as you can and learn. Not just during hunting season.

Be curious all year. Go with other people who are knowledgeable and skilled and it will bring you to new levels yourself. Try and identify partial tracks, different feet of an animal, learn the way they walk and interpret the track patterns they leave; winter and summer. All knowledge about plants and animals contributes to tracking skills as well.

I try and put myself on the spot once or twice a year by taking track and sign, and game trailing evaluations through CyberTracker Conservation (the only organization in North America which evaluates wildlife trackers). It is a humbling experience to say the least; you can’t fake your knowledge and skill as you are tested and provided feedback from some of the best wildlife trackers in the country. When I don’t practice, especially trailing animals, it shows.

Sherlock of Nature- Tracking is fun and rewarding and endlessly variable. You will never know it all.

It seems that everyone is into the CSI and Sherlock shows nowadays. Tracking is the original CSI! There are thousands of stories unfolding out in the wild every day. You have endless amounts of entertainment by stepping outside and becoming the investigator yourself.

We can barely scratch the surface about tracking in a short article. And there are many good resources to help you learn about tracks and sign, and trailing animals. I hope this article at least piques your interest in tracking and helps explain why it still remains a fundamental outdoor skill that will enhance your time in the outdoors and make you a better hunter.

There are many resources available about wildlife track and sign identification. You should read them all but I have listed some that I would classify as ‘required’ reading.

The Art of Tracking and the Origins of Science: Louis Liebenberg.

Mike Taras is the ADF&G Wildlife Education and Outreach Specialist for Interior and Northeast Alaska. Mike is certified as a Tracker III through Cybertracker Conservation (the only organization in North America that evaluates wildlife trackers). He has been evaluated in wildlife track and sign identification as well as animal trailing across the U.S. and in South Africa.