The Chinook Tradition
Feeding Alaskans and a Hungry World 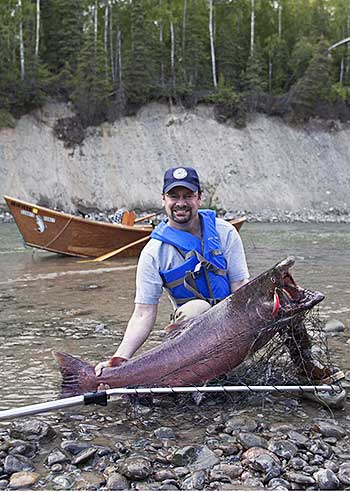 For a great many Alaskans, the ice- and snow-free months begin and end on the water, where wild Pacific salmon are plucked with nets from the tides or pulled leaping and thrashing with rod and reel from our rivers and creeks. Of the five Pacific salmon species that appear here en masse each summer, roiling estuaries near and far as they journey up natal streams, none have gained a higher standing – as a traditional food source, cultural icon, sport fish, and economic sparkplug – than the Chinook.

Commonly called “king salmon” or simply “kings” by Alaskans, Chinook are the largest of Alaska’s salmon and, even in the best of times, the least abundant. The heaviest on record, caught in 1949 in a Petersburg commercial fish trap, weighed an astonishing 126 pounds. The world sport fishing record, a scale-straining lunker of 97 pounds 4 ounces, was hauled from the Kenai River in 1985.

Coveted by sport, subsistence and commercial fishers alike, the Chinook’s appeal has long transcended its succulence as table fare and its marketable size and power against rod and reel. Alaska’s state fish, a fitting symbol of a place as broad, wild and enigmatic as the big salmon itself, the Chinook remains a prominent thread in the fabric of this place, its people and its history.

Early on the morning of May 17, 1985, a 68-year-old Soldotna automobile dealer was soaking salmon eggs in the lower Kenai River when, for just a moment, the entire world seemed to lurch to a stop. That’s when Les Anderson realized, struggling as his rod jolted and wrenched in his hands, that he’d hooked a big fish. The moment’s true significance, however, didn’t immediately occur to him.

Anderson pumped and reeled the thrashing king to his boat three times before he and his fishing buddy realized it was far too heavy to haul over the side. In the end, they beached the boat and dragged ashore, flopping and flaying, a king salmon that would forever change Anderson’s life and bestow upon the Kenai a legendary reputation as a river known for enormous Chinook.

Placed on a scale, Anderson’s 97-pound 4-ounce king salmon turned out to be a world record. For trophy anglers, the catch set a high bar. It also led some to speculate that the distinctive glacial-green Kenai might be natal waters to even larger Chinook. Since Anderson’s catch, many Kenai River king salmon anglers have wondered if their next cast might hook the holy grail of salmon: a 100-pound king.

The big catch drew the attention of a fascinated world to what was already a popular, though relatively new, sport fishery. It was not until around 1973 that “relatively large numbers of anglers discovered that (Kenai River) chinook salmon were susceptible to harvest by bouncing terminal gear along the bottom from a drifting boat,” according Alaska Department of Fish and Game Biologist Stephen Hammarstrom in the 1978 report Evaluation of Chinook Salmon Fisheries of the Kenai Peninsula. Once discovered, the fishery grew rapidly. From 1974 to 1977, Hammarstrom reported that the estimated angler effort for Kenai River king salmon “expanded by 252 percent.”

The popularity of the Kenai River king salmon sport fishery grew even more after news of Anderson’s record catch and continued to rise well into the 21st Century. Indeed, interest in sport fishing for Chinook has grown statewide. A 2006 Alaska Department of Fish and Game paper, The Commercial Salmon Fishery in Alaska, notes, “Currently, average (sport) harvest levels in the 2000s show increases over harvest levels in the 1980s of about 90 percent for Chinook.” 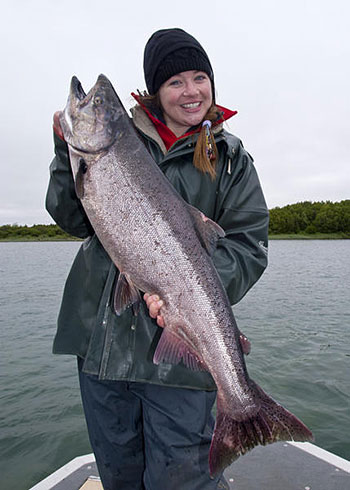 Growth in Alaska’s Chinook salmon sport harvests has been steep and steady. Division of Sport Fish statistics indicate the estimated annual statewide sport harvest of king salmon rose from 43,060 fish in 1977 to a total of 116, 402 a decade later. By the year 2000, the yearly statewide Chinook sport harvest swelled to 177,928 fish and peaked in 2005 when 204,468 king salmon were caught with rod and reel.

Between 1989 and 2006, the Division of Sport Fish reports that sport anglers harvested a yearly average of 170,000 king salmon. Of that harvest, 60 percent was taken in the Southcentral region, location of the state’s population and travel hub. The region’s highways provide access to many waters and fishing opportunities are plentiful, inexpensive and generally easy to reach.

Memorial Day weekend has long marked the traditional – and unofficial – opening of the Southcentral salmon fishing season as this is roughly when the first significant numbers of Chinook begin to return to the Kenai, Anchor and Susitna river systems, among others. Runs build in June, peaking in the Kenai River and upper Susitna drainages in early to mid-July.

Kings also provide sport off Southcentral Alaska’s coasts. In fact, for some saltwater anglers in Resurrection Bay out of Seward, and in lower Cook Inlet and Kachemak Bay near Homer, king salmon fishing is a year-round event. Even during the short days of December, a small and particularly hardy fleet of hardcore salts brave dark waters and freezing spray to specialize in catching “winter” or “feeder” kings – fish drawn to area kelp beds and shoals by rich baitfish stocks.

The Southcentral region’s annual Chinook sport harvest is historically followed by Southeast, which between 1989 and 2006 accounted for 26 percent of the statewide sport harvest. Most king salmon in this productive region are taken by saltwater anglers among the straits and island-sheltered channels of the Inside Passage. An additional 4 percent of the statewide sport harvest of Chinook during this period was taken in the waters of the remote and sparsely populated Arctic, Yukon and Kuskokwim areas.

Each spring, around mid-May, one of Alaska’s most renowned commercial salmon fisheries is hailed in a media event broadcast throughout the Pacific Northwest and beyond. At the spotlight’s center is a fresh-caught Copper River king salmon, dime-bright, pulled from a tub of ice and hoisted high by an Alaska Airlines pilot standing outside a cargo jet. The headlines typically read something like: “First Copper River Salmon Arrives in Seattle.”

The Copper River commercial salmon season’s first catches include sockeye and Chinook, but it’s the big kings that often steal the show. Legendary for their exceptional reserves of healthy Omega-3 oils and fats and savored by gourmands for their “bright red flesh,” “firm texture” and “rich, nutty flavor,” these early kings are marketed as the first, best salmon of the region’s annual fishing season. The fish net high prices for Copper River delta bow-pickers – an average of $5.46 per pound was paid in 2013 – and for retailers whose prices for fresh fillets last spring in the markets of Anchorage, Seattle’s Pike Place, and elsewhere ranged from $27.99 to $38.95 per pound. 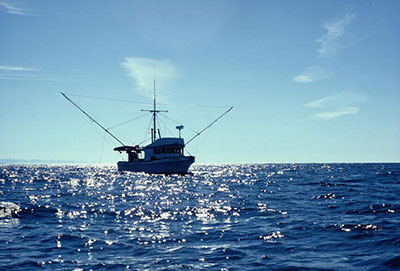 Vaunted as those first Copper River kings are, though, they represent only a small fraction of a statewide commercial Chinook catch valued in 2013 at more than $19 million. In fact, in the scheme of Alaska’s commercial salmon fisheries, Chinook have always played a minority role to more abundant species such as sockeye and pink salmon. Out of the total 2013 catch of more than 272.6 million salmon, only 281,000 – or about 1 percent – were Chinook. Even in better years, before the present cycle of low productivity beset the fishery and with average commercial hauls averaging 630,000 per year statewide, Chinook harvests have represented a relatively small part of Alaska’s salmon catch. Even so, the big fish have long provided a significant source of income for many commercial fishers statewide.

Regionally speaking, the vast majority of Alaska’s commercially harvested Chinook are taken in the Southeast-Yakutat district. Catch methods include trolling, seining, drift-gill netting, and set-gill netting. Of the more than 245,000 Chinook estimated to have been commercially harvested in Southeast last year, the lion’s share – 155,611 fish – were taken with trolling gear. Framed by a summer season running from July 1 through September 20, and a winter season from October 11 through April 30, this productive traditional fishery serves consumers fresh Chinook virtually year round.

The remaining Chinook commercially caught in Alaska are taken mostly in gill nets from fisheries out of Kodiak (where the total catch for 2013 was 34,000), Bristol Bay (19,000), the Yukon-Kuskokwim Delta (a much lower-than-average number of 3,000), Copper River/Prince William Sound (10,000), the Alaska Peninsula (7,000), and Cook Inlet (5,000). Many of these figures represent below-average catches due to recent low Chinook returns and measures taken to conserve and build stocks.

For Alaska Natives along the Yukon River, king salmon have forever been – and remain today – staples of the traditional subsistence diet. The Yukon River kings are valued for their particularly rich fat reserves (an adaptation that provides fasting fish the energy required to travel upriver nearly 2,000 miles through Alaska and into Canada) and are favored by many as the region’s best salmon for human consumption.

These first salmon of spring arrive shortly after the Yukon is free of ice and were historically taken by people such as the Anvik-Shageluk Ingalik, the Deg Hit’an and others with traps, dip nets and even harpoons. Early subsistence fishing methods were recorded by James W. VanStone in Ingalik Contact Ecology: An Ethnohistory of the Lower-Middle Yukon, 1790-1935:

“(King salmon) were taken most effectively in large basket traps. … Traps were more effective than gill nets since these fish do not travel as close to shore as do other species of salmon. Another common means of taking them was by means of a dip net. The fisherman, in his river canoe, drifted down river with the current while holding the net in the water. When an ascending salmon was caught, it was lifted out, killed, and placed in the canoe; then the operation was repeated.” 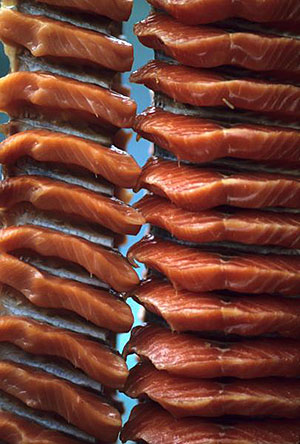 Similar methods were employed by all Alaska Natives throughout the king salmon’s Alaska range; nets and basket traps were constructed with available wood, roots, animal hide and sinew while harpoons, as described by VanStone in another paper about the Deg Hit’an, consisted of a “spruce wood shaft, approximately 1.5 cm in diameter, and a fixed antler fore shaft, which is inserted into a slit at the distal end of the shaft and lashed with spruce root. The harpoon heads have closed sockets, single spurs, and round line holes from which extend rawhide lines.”

In the late 1800s, fish wheels began to appear in some Alaska rivers. A new technology brought north with the Klondike gold rush from the Pacific Northwest, the concept was as effective as it was simple. Baskets affixed to struts (or spokes) radiating out from an axle were set on a floating platform that was placed in the current and anchored to the river bottom. The paddle-like baskets constantly rotated with the current so that salmon traveling upstream were scooped up and funneled into a bin placed on the fish wheel platform. Originally used to catch salmon to feed miners and settlers, fish wheels were soon adopted by Alaska Natives. Some subsistence fishers today still use fish wheels to catch salmon, including Chinook, on the upper Copper, Yukon and Kuskokwim rivers.

Subsistence fishing for king salmon in Alaska today is governed under “subsistence uses,” a term defined by state regulation as the “noncommercial, customary and traditional uses of wild, renewable resources by a resident of the state for direct personal or family consumption as food, shelter, fuel, clothing, tools, or transportation, for the making and selling of handicraft articles out of nonedible by-products of fish and wildlife resources taken for personal or family consumption, and for the customary trade, barter, or sharing for personal or family consumption; in this paragraph, “family” means persons related by blood, marriage, or adoption, and a person living in the household on a permanent basis.” When harvest restrictions are necessary to conserve Chinook, subsistence fisheries by law have preference over other fisheries.

This article is currently running in Chinook News, a publication of the Alaska Department of Fish & Game.

Ken Marsh is an avid angler, hunter and outdoorsman and works for the Division of Wildlife Conservation in Anchorage