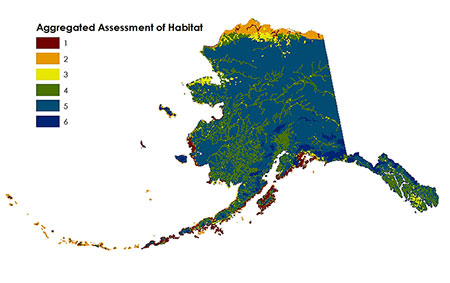 ADF&G developed this aggregated map with the following habitat values: 1.Terrestrial species of concern, comprised of Threatened and Endangered species;
2. Other species identified in Alaska’s Comprehensive Wildlife Conservation Strategy;
3. Aquatic species of concern based on the Anadromous Waters Catalog;
4. Species Richness;
5. An index of Freshwater Integrity based on NFHP. NFHP stands for National Fish Habitat Partnership. This map display is based on 10 square mile hexagons. Habitat designated as “crucial” on this map reflects an expanded acreage due to the scale. A datapoint from layers 1, 2, 3, and 5 within the hexagon results in added value; layer 4 requires 50% coverage.

Through an initiative of the Western Governors’ Wildlife Council (WGWC), the Alaska Department of Fish & Game (ADF&G) is creating a web-based tool that allows the public to view crucial fish and wildlife habitat and corridors. This online GIS-mapping tool is designed to provide a coarse-scale view of important habitat across species to inform the pre-planning phase of energy and infrastructure development, among other land use planning and conservation interests. This interactive application allows the user to compare their area of interest with crucial habitat as defined by the State; this is provided in a non-regulatory context.

In December 2013, the Western Governors’ CHAT was published on the internet with habitat information shown across the 16 western states that participated in its development. On this first west-wide version, Alaska displays an aggregated layer for Crucial Habitat based on four habitat values described in the map below. At this preliminary stage, Alaska also displays information for two distinct layers: Terrestrial Species of Concern and Aquatic Species of Concern, which will be updated upon the launch of the Alaska CHAT in December 2014.

As the project name refers to “crucial” habitat, we are using the WGWC definition of this term to begin identifying important habitats across Alaska’s landscape:

Crucial habitat is defined as places containing the resources, including food, water, cover, shelter and “important wildlife corridors,” that are necessary for the survival and reproduction of aquatic and terrestrial wildlife and to prevent unacceptable declines, or facilitate future recovery of wildlife populations, or are important ecological systems with high biological diversity value. 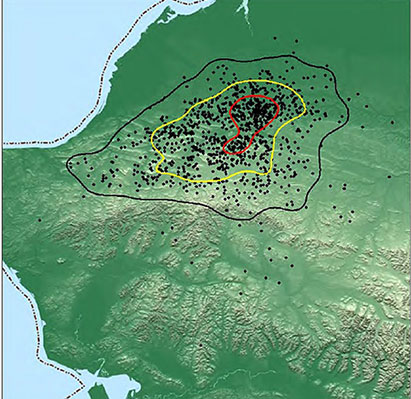 Important Wildlife Corridors are crucial habitats that provide connectivity over different time scales (including seasonal or longer) among areas used by animal and plant species. Wildlife corridors can exist within unfragmented landscapes or join naturally or artificially fragmented habitats, and serve to maintain or increase essential genetic and demographic connection of aquatic and terrestrial populations.

As we evaluate each of the wildlife species that occupy this vast state, we find that the definition of “crucial” may not remain constant. For instance, analyzing telemetry data to determine calving grounds for the Western Arctic caribou herd must undergo a specific methodology that respects the biology of this herd. Conversely, biologists are challenged when defining winter range for moose populations because the animals do not follow the same seasonal pathways from year to year.

Shown above in the excerpted map (p. 233) from the Caribou management report of survey-inventory activities 1 July 2008 - 30 June 2010, (2011 ADF&G), the calving grounds for the Western Arctic caribou herd were derived from VHF radiocollared maternal cows over many years of data collection. This is the type of evaluation that will be incorporated into the CHAT to depict crucial habitat. The CHAT will allow the user to upload their area of interest, or polygon, to compare how much intersection occurs among the various species’ habitats. In the case of a development project, this information provides an indication that their planning process may need additional time to accommodate the biological values of the landscape. 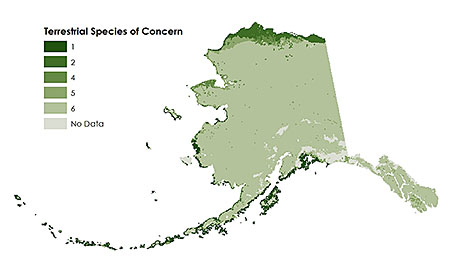 Another example of information that will be included in the CHAT is the Terrestrial Species of Concern. Through assistance from the Alaska Natural Heritage Program, this layer was developed from observation data witnessed in the field and modeled data from the Gap Analysis Program. It displays the concentrations of species across the state in the following categories: federally listed as threatened, endangered, candidate, or proposed; Natural Heritage G1/G2 or T1/T2; and high profile species of current management concern.

On our website, we describe more about what this tool can provide and how it is intended to help industry, research and conservation. While this project stems from an initiative of the Western Governors’ Association where many western states face serious habitat fragmentation in an era of continued development, Alaska has the unique opportunity to plan for development with access to information about the habitats needed by our fish and wildlife species. This project also serves to expand the viewership and increase the value of data collected for Alaska’s game, non-game and fish species. Learn more about this project at http://www.adfg.alaska.gov/index.cfm?adfg=chat.main. More map products are expected to be posted over the coming months as we prepare to launch the actual web tool in December. Comments are welcomed and can be submitted through the website.

Sue Rodman has a background in forestry and fire which complements her work in DWC supporting habitat enhancement through fire and mechanical vegetation treatments along with other landscape-scale projects such as this habitat mapping effort.