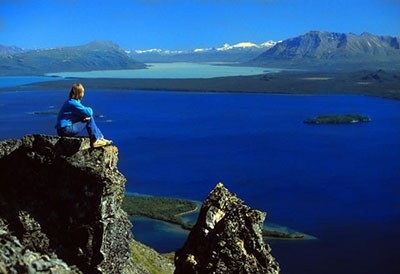 In summer, a thermocline develops a few meters below the surface of a lake. Because lake water is not mixing vertically, the upper meter or two of water warms and sits atop colder subsurface water. The thermocline is the line or zone between the two layers of water, which may have a 10 to 20 degree difference in temperature.

One of the most interesting properties of water is that it is less dense as a solid (ice) than it is as a liquid. This is the property that causes ice to float rather than sink. If water did not have this property, life, as we know it, would not be able to exist. If water acted like most other liquids, during winter, lakes would continuously form ice on the surface. The ice would sink to the bottom and more ice would form and sink until lakes were solid ice blocks. However, because ice floats, it essentially caps the lake and though ice continues to form throughout winter, it does so slowly because the ice itself acts as a buffer between the frigid air temperatures and the lake water.

Water is most dense at 39 degrees Fahrenheit (4 degrees Centigrade). Water that is either warmer or colder than 39 degrees F (4 degrees C) is lighter than water at that precise temperature. This characteristic is what causes “turnover” in our lakes every spring and every fall. 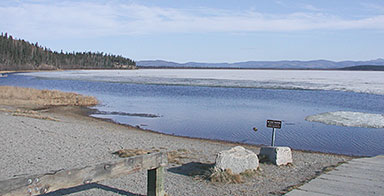 Quartz Lake in May with the ice melting fast. Turnover happens twice a year, in the spring and fall, allowing nutrients and oxygen to become evenly distributed in the water column.

In the spring as the ice melts, the same thing occurs, except that the surface waters warm and become more dense than the underlying cold water. That warmer water sinks and the colder water rises to the top to be warmed until the entire lake has turned over once again.

Lake turnover mixes the lake water, distributing nutrients from the bottom upward and oxygen from the surface downward. This turnover of nutrients and oxygen is highly beneficial to the health of the lake and its aquatic inhabitants, as well as for the people and other critters that depend upon the lakes for food and water.

In just a few weeks, the ice will be off of most Alaska’s lakes. The lakes will go through spring turnover. Though not at all as flashy as the arrival of the plethora of ducks and geese filling the air with a cacophony of quacking and honking, lake turnover is a silent, sure indicator that spring is here and summer is not far behind.