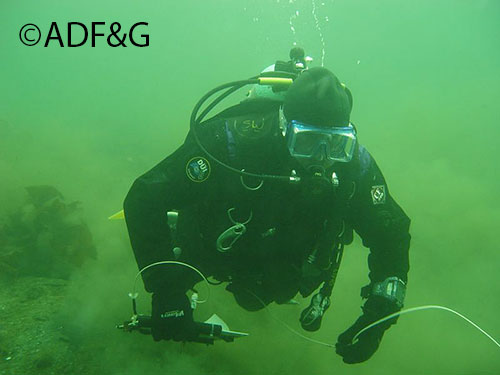 Alaska has some of the most successful commercial fisheries on the planet. One of the reasons that Alaska has been so successful with resource management is its requirement and reliance on some of the best biomass assessment research in the world. Alaskan animals are counted by air, foot, snowmobile, boat and my favorite, SCUBA gear.

Underwater research is conducted throughout the state and one of the biggest programs is located in Southeast Alaska. The dive team for Southeast Alaska currently consists of 24 divers. Divers are a mix of commercial fisheries area management biologists, assistant area biologists, herring and shellfish research biologists, and a few biologists from other divisions. Each year the dive program coordinator sends out a list of planned dive trips for the season and everyone reports back what dive trips they can be involved with. Then starting in March, the state research vessel Kestrel travels to each research area with a different set of divers that conducts the preplanned dive transects. Each year all of the major herring stocks in Southeast Alaska are surveyed and 10 or so trips for shellfish assessment are conducted throughout the summer. A dive trips length is highly varied but an average trip lasts from 7 to 10 days.

Diving in Southeast Alaska can be quite spectacular in many of our research locations. Southeast Alaska hosts large numbers of colorful invertebrates, diverse kelp types and numerous species and concentrations of fish. There is always something to see on each dive and you never know when you will be surprised by a shark, octopus or sea lion that comes at you from the distant gloom. No diver can avoid a slight racing of the heart when a 500 pound sea lion suddenly appears in front of you when the visibility is down to 10 feet. I have often felt large movements of water just out of the range of visibility.

Dive fishery assessment in Southeast Alaska began in the 1970’s when a small group of department biologists began conducting underwater dive transects to estimate the number of herring eggs that were laid down by spawning herring and to document the presence of various type of shellfish such as urchins, sea cucumbers, abalone and geoduck clams. 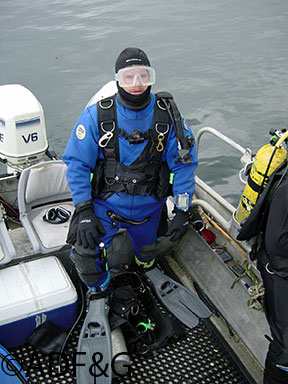 The author in diving gear, ready for work.

Initial surveys were done on industry boats and department skiffs and developed into a larger program that brought in larger department research vessels. It was an exciting time to be involved in dive research and the program gradually developed into a valuable research tool that is currently used to conduct commercial fisheries that have become a large part of the economy of Southeast Alaska.

I was trained to use SCUBA gear 1987 while attending the University of Alaska in Fairbanks and began diving with the department’s research team in 1990. At that time the department utilized the research vessel Steller, a 60 foot ex-seine boat that was outfitted with an air compressor, dive locker, two skiffs and bunks to house and feed 6 divers and two crewmen. Each morning we would gear up, jump in the skiffs – three divers to a skiff - and spend the day conducting transects. These surveys were before GPS, so each skiff would have a map with a dot marking the location of the transect. We would do our best to jump in the water in just the right spot to start the transect. We didn’t have dive ladders and pulled ourselves into the small skiffs when we were finished.

The Southeast dive program has developed considerably since those early days. We now utilize a 106 foot specially designed research boat called the R/V Kestrel. It was purchased on auction when the Canadian government decided that they couldn’t use it for its intended purpose as a sonar boat. We moved to custom made “workskiff” brand aluminum dive boats, custom made aluminum ladders for getting in and out of the water, and we have a console mounted GIS mapping units that can pinpoint dive locations to within two to three meters.

Most of our dives are conducted using two methods. One method is used for herring deposition assessment and one method is used for shellfish assessment. Both methods consist of diving a perpendicular transect that begins at the shoreline and ends either when the spawn runs out or when a set depth is reached. Our maximum depth at all times is no more than 90 feet and usually 70 feet. We have used many other types of methods throughout the years on special projects but these two are the most commonly used. 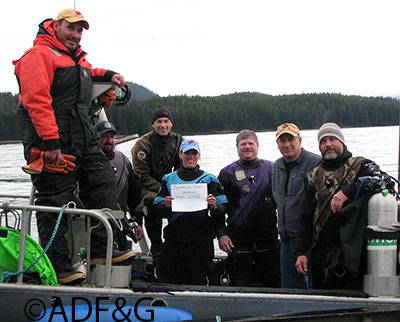 Members of the Southeast Dive Team.

Herring diving for me has always been an endurance test. Herring diving occurs in the spring when the water is colder and the diving protocol requires slower movement through the water. Common sense usually dictates that in cold conditions you should speed up, not slow down. In addition, travel from big boat to the dive sites is done in an open skiff where cold spring winds can penetrate your dive suit before you begin your dive. A cooler with hot water is put into the back of the skiff each morning so that you can at least warm up your hood and gloves before you put them on.

If you want to be a herring diver you initially start in the program as the second diver for two to three years at which time you become “calibrated”. Once you become calibrated you can then “estimate” herring eggs. The process to get calibrated is to count herring egg samples during the yearly calibration times. During these times, a sample of herring eggs is taken from a good beach, all the divers estimate the eggs, and then the eggs are counted in the lab. After a couple of years, there is a calibration correction for each diver that can be used in the model that calculates the herring biomass.

Herring diving occurs after herring have come into shallow nearshore waters and have spawned or laid their eggs on kelp. All the commercial fisheries are over or nearly over by this time. Department herring managers and researchers create a map in ARCview GIS of all the spawned shoreline for each stock. Transects locations are determined, the dive team begins to assemble on the Kestrel and diving begins. Each herring transect begins in the intertidal area just below the trees. This insures that all herring eggs that are laid on the beach are counted. This is the only warm part of herring diving. In fact, you can get very hot walking on the beach in full dive gear. Most of the dive team enjoys herring diving on the northern Southeast Alaska herring stocks that occur later in the spring because the weather and water tend to be warmer. 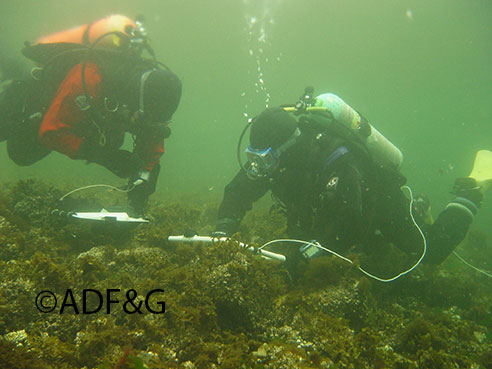 Shellfish diving begins in June and ends in September and has much warmer air and water temperatures than herring dives.

After the initial start, a count is made every 5 meters using a PVC square a tenth of a meter in size. The trick is to count the layers of eggs. Each layer of eggs is 40,000 eggs. There is a 5 meter long string on the square and diver number one swims ahead until the string stretches to five meters where diver number two gives a tug on the string. When the string stops the lead diver estimated eggs. After the string has played out diver number two swims forward and writes on an underwater slate the number of herring eggs that is given to him by diver number one. All communication is done through sign language except for the wide eyed look by the second diver that says, “Count faster…I am freezing”. So, the lead diver travels five meters, stops and shivers, estimates the number of herring eggs and the second diver writes the number on the slate. This is repeated until you run out of eggs or start to get hypothermic, whichever comes first. There is a compass on the square to ensure that the lead diver is swimming in a perpendicular line from the shoreline. Visibility is often one or two feet as herring spawning time is when our spring plankton blooms occur. The string becomes your only connection to your dive buddy when the visibility is only two or three feet. Some dive sites with poor circulation have additional low visibility issues such as rotting herring carcasses, dead herring eggs and a foul smelling (and tasting) mix of sea gull, sea lion and scoter feces.

Once herring season is over the dive program shifts into sea cucumber, urchin and geoduck diving. The standard shellfish transect is done perpendicular from the shore just like herring. Geoduck transects have some modification as they focus more on specific beds. The standard transect starts at mean low water (the assumption is that there are no animals on the beach) and goes to the predetermined ending depth. Each diver has either a two meter stick made out of PVC pipe for sea cucumbers or a 1 meter stick for urchins. On each stick there is a compass and a slate for writing down animal counts and dive data. Each diver swims the transect while holding the stick parallel to the shore. Each diver counts all of the target animals that are seen under the stick. The results are a count of all animals of either one or two meters of shoreline. The number is multiplied with the total meters of shoreline in any given area to give you the total numbers of animals. 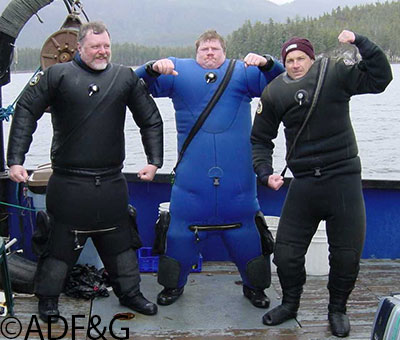 Divers inflate their suits - These "Marshmallow Men" will pump you up!

Shellfish diving begins in June and ends in September and has much warmer air and water temperatures than herring dives. In addition the divers are warmer as they are constantly moving throughout the dive and some of the large spring plankton blooms are over increasing visibility. Unfortunately, there are still summer plankton blooms that vary visibility conditions throughout Southeast Alaska. One days transects can have visibility of 70 feet and the next day’s visibility can be where you can hardly see your hand in front of your face.

Divers alternate transects throughout the day so that no one diver has to do each of the days transects. It is always the hope of each diver that their time to dive will be on one of the more exposed locations where the diving is better and not get stuck with a backwater muck dive where the predominant substrate is “quivering mud”.

The Alaskan dive assessment program has won scientific respect the world over and has allowed for successful commercial fisheries. One added benefit to the department is that it allows biologists and boat crew to develop long lasting friendships that only field programs can produce and nurture. After a hard day of diving there is always preparation for the next day, capped off with a delicious homemade meal from the vessel cook along with card games and movies to finish off the day.

Scott Walker is the Area Management Biologist for the Division of Commercial Fisheries and is based in Ketchikan.