Caribou Cuisine for the Contemporary Chef 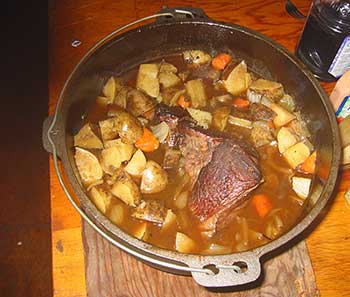 Augie slides his knife expertly up the center of the caribou.

He pushes his hands deep into the caribou’s chest cavity as I push mine deeper into pockets. Both finding warmth from the numbing September air.

A slurpy suctioning ripping sound breaks the silence and the connective tissue. Augie heaves, blood gushes, and guts flop away from the body. The hide folds on the ground as he punches it from the muscle. A crunchy pop signals severed joints. Augie sets aside the heart, tongue, liver and other organs. A strange body part with folds of tissue is washed and placed with the other edible organs.

Gazing at the steaming guts, I consider revisiting my vegetarian college days.

Many meat-eating years later, however, standing in front of my freezer I gaze over the green and white bags of frozen caribou burger and butcher-papered roasts. I imagine a package of caribou bursting forth and miraculously turning itself into a delicious meal.

It is mid-March and months of caribou stew, caribou burger, caribou steaks, and caribou sausage leave me gastronomically uninspired.

I remember watching Augie select his favorite fresh organs. And I wonder, ‘How did the Inupiat manage to eat the same meat, prepared in the same way, for days, and weeks, and months on end, before Piment d’Espelette, Himalayan pink salt, fresh sprigs of rosemary and Hungarian paprika?’

In fact, the Inupiat did develop a refined system of spice and flavor, one that is unfortunately becoming a lost art. Preparing a delicious meal of isigaich or slightly fermented caribou foot-bone cartilage added an incredible zest to an otherwise simple protein based diet.

Still staring into the freezer, I imagine myself an Inupiat woman peering into a frozen cache a century ago. I wonder if she contemplated what to prepare her family for dinner too, a novelty during times of plenty. Will it be quaq dipped in seal oil, boiled qitigaq (spinal cord) or maybe some qayusraaq (blood soup)? With hand-made tools and nature’s flavors, arctic women traditionally created diverse and nutritionally balanced meals using creative yet scientific practices of preservation, preparation, and fermentation.

Using nature’s spice to flavor food, bacteria, through the process of fermentation, gave food a rich and sensually stimulating flavor that must have compensated for the blandness after months of eating the same food. Food preparation techniques and consumption of specific animal parts were often done out of necessity.

As they have for centuries, caribou remain an important resource to the subsistence users of Northwest Alaska. Migrating caribou move through many villages in varying seasons, providing a staple food source amid vast expanses of Alaska’s western mountains and tundra.

With a vast global economy and access to technology, traditional food dishes and food storage techniques have changed. Caribou meat found in arctic homes today is packaged in plastic or paper and stacked in commercial and household deep freezers that run off electricity. But in a sod igloo long ago, unique methods prepared caribou in intricate ways designed to preserve and enhance the edible parts for specific food desires.

Zona Spray Sparks, a food writer and critic, was born in Shungnak, a small Inupiat village on the upper Kobuk River in Northwest Alaska, writes about food in Alaska’s Vanishing Arctic Cuisine, she describes traditional culinary practices: “Native women create an extensive and complex repertoire of dishes, preparing hundreds of indigenous foods according to specific techniques.”

New generations of Inupiaq people still enjoy traditional dishes, but many of the seemingly strange old foods highly desired by elders -are snubbed by their grandchildren. Access to mass produced foods, spices, and sauces has negated the need for one to desire the flavor for say, fermented fish heads. Sparks shares how she learned about the origins of Inuit food. 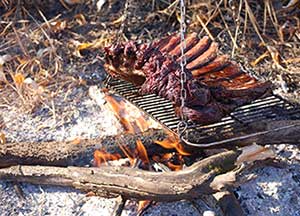 Caribou ribs over the fire.

“The elders helped me understand that a systematic set of cooking methods underlies Arctic cuisine and that there is a unifying theme; whether dishes are boiled, roasted, fermented, stewed or quaqqed, they titillate the senses by means of skillfully employed contrasts. Soft textures play against coarse; hot temperatures, against cold. Pungent condiments offset bland tastes.”

Seal oil is the backbone and consequently primary ingredient in all Arctic cuisine. Everything from mammal flesh, to fish, birds, berries, edible plants, and marine mammals were generally preserved in seal oil and eaten after dipped in seal oil. The variety of edible plants combined with fish, fowl, and marine mammals provided all the vitamins, minerals, proteins and fats necessary to have a balanced diet. Fresh sour-dock greens and berries provided vitamin C, anti-oxidants, fiber. Fish yielded vitamin D, Omega-three fatty acids, and lean protein, and calcium was obtained from pulverized bones and gathered eggs.

Through a simple process of chemical alteration, food changed in taste and consistency. Sparks notes that the term “cooking” can be misleading. Manipulating foods through air, heat, fermentation, and freezing can alter the cellular structure of the protein in such a way that foods were not eaten raw-but not necessarily cooked with fire.

Fermentation in a controlled environment ensures that mold and botulism did not ruin meat and endanger family members. Eskimo women established strict guidelines for fermenting foods to ensure a safe and high quality product. Sparks describes two traditional food-preparation methods. Controlled fermentation occurred in holes dug in the ground or waterproof baskets or pokes. Each step was executed carefully to create an environment with a perfect level of acidity so the dish would not spoil or become deadly. Eskimo women knew that cool temperatures and sour plants played an important role in the careful preparation of fermented foods.

Another method for “cooking” foods was done directly by the animal. The stomach contents of caribou contain lichen and plant material, which in a fresh state is toxic to humans.

“These naturally fermented foods came from the stomachs of freshly killed moose and caribou, or from ptarmigan intestines,” says Sparks. “With a slightly sweet, earthy taste, they were a hunter’s reward, and very welcome.”

Raw meat, which had not been frozen, could cause stomach problems, so hunters would “cook” meat through chemical alteration inside the warm caribou stomach, or rumen, immediately after harvest. They didn’t have camp stoves, seal oil lamps didn’t travel with them, and even a quick fire was often impossible on the treeless tundra. The stomach acid, warm temperature, and partially digested lichen would “cook” the caribou meat on the spot and create a necessary, nutritious, and tasty meal.

Meats were also altered in the field by leaving a warm caribou buried in the snow for a few days. Enzymes from the animal’s warm body tenderize and flavor the flesh giving meat a different a unique taste. The result is a slightly pungent meat, highly desired by elders.

“Subsistence hunters take care of game in a couple of different ways,” he explains.

“One is to cut the head off, take the stomach out, lay it on the ground with the head up and then cover it (the whole caribou). We cover it with snow and that’ll freeze it, and we call that pirruoaq.”

Field-dressing caribou can take various routes, including actually leaving the hide on an animal taken during the time of year when air temperatures typically can hover well below zero in Arctic Alaska.

“When I am hunting caribou--a late fall or winter caribou-- I won’t skin it right away,” explains Cyrus Harris, who harvests traditional foods that go to local elders. 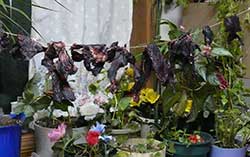 “Keeping the hide on lets the meat tenderize a little because the meat won’t freeze too fast,” says Harris, who works in the Traditional Foods Program at Maniilaq Association, Northwest Alaska’s health and social services agency serving some 12 villages and numerous remote subsistence camps.

The centuries-old Inupiaq custom of storing caribou with the hide on helps both preserve the meat and create a traditional delicacy, with the hide acting like “super butcher paper” if you will, minimizing “freezer burn” while retaining more moisture in the meat.

Most organ meats are also harvested. Heart, tongue, and liver are favorites, but a few others are also considered excellent.

This is usually prepared by cleaning and boiling, although some elders may leave the contents inside while cooking. Harris notes that another favorite part of the caribou for him is the “sausage” or kivviq. To prepare the sausage, mesentery fat is pulled away from the stomach then stuffed into the sausage tube as you turn it inside out. The sausage is tied off, boiled, and eaten with flour soup (a thickened broth) or sliced and dipped in seal oil.

There are endless accounts of different ways every part of the caribou was used for food and tools. Some traditional dishes may seem abnormal, but each dish had a specific function and provided nutrients and variety in a time when every meal mattered. Kuuvanmiut Subsistence: Traditional Eskimo Life in the Latter Twentieth Century, a resource on the Kobuk River people, lists all parts of the caribou and describes preparation methods.

One unique description from Kuuvanmiut Subsistence illustrates how even eyeballs were an important traditional source of nutrition for the Inupiat. “Eyeballs from caribou and the fat behind them are eaten raw or from the boiled head. The eyes are also eaten after being dried by hanging them inside the house or turning them inside out, tying them with sinew, and allowing them to dry.”

“For the Natives lucky enough to have a caribou hunter in the family, sucking sweet icy marrow jelly from the beast’s hooves and feeling it melt on the tongue is as good as it gets.”

Perhaps next winter when the meat supply is getting low, I’ll harvest a caribou and bury our bull in the snow for a few days. Let the meat ferment. Carve off a perfectly frozen slice. Savor the slightly fermented quaq dissolving in my mouth. Who needs pink sea salt from the Himalaya’s anyway.