Eyes in the Field
Remote Cameras Add Insight on Wildlife 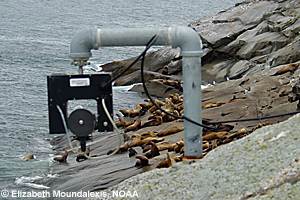 A robotic, remote-controlled camera watches sea lions on Chiswell Island, part of the Alaska Maritime National Wildlife Refuge. Images are broadcast to the Alaska Sea Life Center and researchers and visitors alike can view the animals.

Reuben Yost can count the eyelashes on a Steller sea lion 50 miles away.

Yost is monitoring a sea lion rookery at Grand Point between Haines and Juneau. One route for a proposed highway up Lynn Canal passes by Grand Point near the Katzehin River, and Yost is tracking sea lions' seasonal occupation of the site for the Alaska Department of Transportation. Reports from pilots flying over the rookery used to be one of his best sources of information. These days, Yost watches using a robotic, solar-and-wind powered camera system set up on the rocks.

"This morning I saw about 100 animals," he said. "We have three cameras there. One camera is right on top looking down, and you can count the eyelashes on a single animal with that one."

Yost is monitoring the Grand Point rookery from his office in Juneau, and he's not the only one. The signal is streamed on the Internet so sea lion researchers in Seattle and Anchorage can tune in, and control the cameras. The video stream isn't available to the general public, but some "animalcams" do send live, real-time images to anyone with Internet access.

This spring, people across the country have been watching the progress of two pairs of nesting loons - one pair in Alaska, the other pair in Maine. A camera system at Ano Nuevo State Reserve on the Central California Coast brings a beach full of bellowing elephant seals - complete with rolling surf and crying seagulls - to home computers. In addition to live remote video, associated websites offer a wealth of information on wildlife.

Known as animalcams, these systems offer an unusual opportunity for people to learn about wildlife and see wild animals up close in their natural setting. They can be valuable tools for scientists, but they do have limitations and problems.

"It's a mix - there are wonderful applications in the right situations," said Lauri Jemison, a marine mammal biologist with the Alaska Department of Fish and Game. "But you learn a lot being out there on site. There are things that you wouldn't get sitting in an office in front of a computer."

Biologist John Maniscalco of the Alaska Sea Life Center in Seward has been working with robotic cameras for almost five years. He has cameras on Seal Rocks and at Chiswell and Natoa Islands, remote, rocky outcrops that serve as sea lion rookeries and haul outs in the Gulf of Alaska about 35 miles from Seward. Images are broadcast to the Sea Life Center, where biologists and visitors watch the action.

Maniscalco said the systems were not reliable at first. "We had the wind generators destroyed by winds," he said. "We had problems with the camera lens fogging up. Sea lions destroyed some of the equipment - they'd get up on the cliffs where the cameras are mounted and lean against them. Once in a while we get big storms, and we've had waves sweep cameras off." 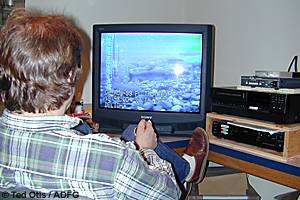 Collaborating with SeeMore Wildlife Systems, a Homer company designing and installing robotic camera packages, Maniscalco and his associates have worked out many of the bugs. Mounts and cables have been modified, cameras have been repositioned to safer spots, and some are removed in the winter. Cameras have wipers and cleaning fluid to keep the lens clear.

"In the last few years the cameras have been working really well," Maniscalco said. "There are a lot of advantages to having this system - one is not having to deal with the weather conditions out there. It can be really snotty in June and last year we had two major storms. Eleven pups were washed out to sea."

Fortunately, the cameras held fast and biologists were able to observe the storm and the aftermath, which included the mothers searching for their lost pups. A biologist would be unlikely to remain in the field in such adverse conditions.
Ted Otis is monitoring salmon runs in streams and rivers on the Kenai Peninsula. A state fish research biologist in Homer, he's been experimenting with remote cameras mounted above the water and under the water. The "skycam" sits about 18 feet above the stream and sees bank-to-bank, taking one picture per second and recording the images on tape. A 160-minute tape holds eight days of data.

"It looks like a jumpy cartoon, but you can see everything that is going on," Otis said. "This is really new stuff and it does show a lot of promise, especially as we work with image processing software to auto-count."

Using a camera and a computer to count fish automatically can work well in a fish ladder, where lighting and presentation of the fish is carefully controlled. It's tough in the field, where glare, ripples, turbidity and other animals confuse the program.

Monitoring wildlife is a time-consuming process, regardless of whether the observer is in an office or in the field. Biologists spend countless hours counting animals, recording activity, documenting weather, the presence of predators and the variety of factors that influence animal behavior.

Lane Chesley of SeeMore Wildlife Systems said new computer software may help. His company is developing an optical recognition program that evaluates a scene and begins recording only when an animal is present. Another program linked to an underwater microphone turns on a recorder only when it hears and recognizes the voice of a killer whale.

"Every year we learn more about what researchers are looking for," Chesley said. "When researchers gather data with electronic assistance one problem is how to manage the data. We're developing tools to help them highgrade the data and get the most valuable information."