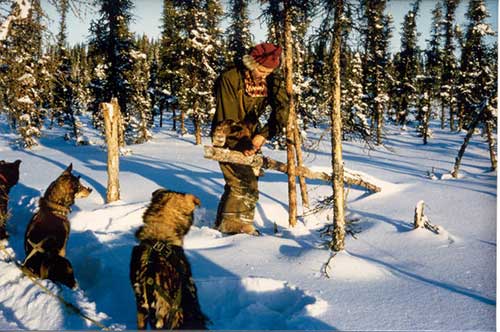 Winter is trapping season in Alaska, and dog owners sometimes worry that a pet could be caught in a trap. That’s unlikely to happen for a variety of reasons, but Fish and Game and the Alaska Trappers Association are teaching people how to recognize traps, signs of trapping, and how to release a dog should it become trapped.

Biologist Stephanie Sell helped organize a “Sharing the Trails” seminar in Juneau in early November, a roughly two-hour class on a Wednesday evening. About 25 people attended, and three local trappers volunteered to help.

“A lot of people came out of it way more educated than they were when they went in. A lot of people really don’t know anything about trapping, and people were diving right into questions,” Sell said. “We had traps that people could handle, they could talk with the trappers, and we had a lot of tools they could use to get traps open – dog leashes and ropes, sticks, and things like that.

One trapper in particular made a good connection with the participants.

“Jessie started out with the trapper’s code of ethics, going through each one,” she said. “He told them, ‘We’re not out here to catch your dogs, I’m a dog owner, and when I started trapping, my dog got caught in a trap, and I know how mortifying it is. I was panicked, but in 30 minutes he was fine.’ He threw himself out there and people really appreciated it.”

Sell said this workshop in other communities can have a very different tone. 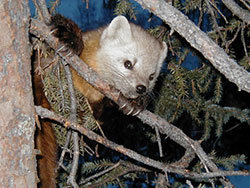 Marten are the most sought-after furbearer in Alaska. Marten traps are typically set off the ground and are not encountered by pets.

In Juneau, trapping is closed within ½ mile of any street or road - and within ¼ of the coast along the entire road system. This is a city ordinance. Other state and federal regulations apply as well and affect where trapping may occur – trapping is closed on the Mendenhall Wetlands State Game Refuge and the Mendenhall Glacier Recreation Area. Trapping is closed within ¼ mile of 20 designated popular trails -except small traps that are set at least five feet off the ground (primarily targeting marten) are allowed if they are at least 50 yards off the trail.

Different communities may apply different regulations, so the likelihood of encountering any trapping activity varies with the area.

Fish and Game has created a handy two-page brochure that details how to release a dog from a trap and offers basic information on how different traps work. It’s available online or in print (after about Jan. 13) at area offices.

The Alaska Trappers Association has produced a 30-minute video, "Sharing Alaska's Trails," to address concerns about dogs getting into traps. 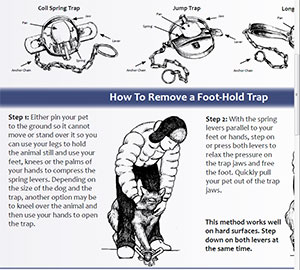 Fish and Game has created a handy one-page brochure that details how to release a dog from a trap and offers basic information on how different traps work. It’s available online or in print at area offices.

Long-time Fairbanks trapper Pete Buist narrates the video. Buist, a hunting guide and former state game board member, is also a former president of the ATA. Buist has trapped for 40 years, and for 20 years he used a dog team to tend his trap line.

An open caption version of the video is available as well.