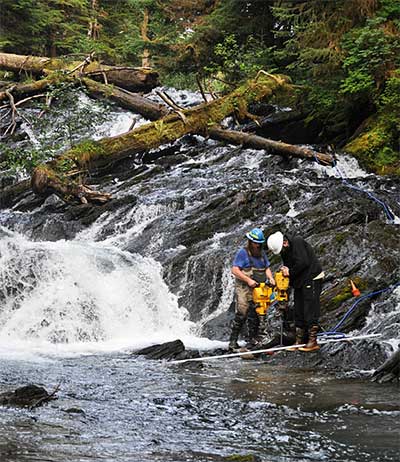 Kanalku Falls on Admiralty Island. Rob Miller and Thor Eide drill holes in the 10x10 foot section of bedrock that was removed with explosives to deepen the jump pool below the falls (picture courtesy of Randy Bates)

As I stared at the thunderous and debris-strewn Kanalku Falls, I couldn’t help but wonder how a fish could even begin to climb it. In the same way that a rock climber stands back from a crag and plans his route, move by move, I tried to envision the path a fish would take, making the giant leaps and bursts of speed required to top out on the thirty-or-so foot high falls complex.

Kanalku sockeye are like none other. They are highly valued as a historic and contemporary food staple for residents of Angoon and have been modified by thousands of years of natural selection to be agile jumpers and climbers, best suited for this falls alone. Smaller on average than most sockeye, the successful Kanalku red must be able to make two consecutive jumps of at least six feet, then skirt another 20-some vertical feet of shallow cascade while avoiding hungry brown bears, lazily perched on a log waiting for the next item on the buffet line.

According to weir data collected by Alaska Department of Fish and Game (ADF&G) Commercial Fisheries Division and U.S.D.A. Forest Service (USFS) staff, in an average year about 50 percent of sockeye successfully pass these falls on Admiralty Island in Southeast Alaska and spawn upstream. Years ago, the USFS chipped stair-like step pools in the upper falls bedrock to aid fish passage. Most agree that it improved fish passage success, but no hard data existed to really know. In subsequent years, enthusiasm to increase fish passage success mounted, and in 2013 the Division of Commercial Fisheries provided funding to the USFS to further modify the falls using explosives.

Back on the stream, I squished along in my soggy wetsuit booties carrying a cast net on my shoulder, one of many tools we used to move fish away from the blast site. The USFS attempted to blast the falls in the spring, prior to the arrival of spawning fish, but flow was too high for drilling and blasting. Therefore, the next best option was to work in the late summer at the end of the sockeye run before flows increase in September, and remove fish from the area near the blast. 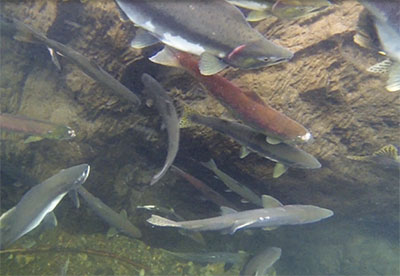 At 12:00PM on August 28 with holes loaded, seismic monitors, caged test fish, and cameras in place, the fuse was lit. Several rapid high pitched bangs and a deep rumble echoed off the mountainside to our location about 1,000 feet downstream.

We arrived back at the site minutes later and found things looking similar, with the exception that the garden shed-sized hunk of bedrock that used to stick out of the water about a foot was no longer visible. On closer inspection, it appeared that the blast had broken the rock and deepened the jump pool exactly as planned. USFS Sitka Ranger District Master Blaster Rob Miller had engineered the detonation of each drill hole to crumble the rock into small pieces, but avoid the use of excess force to keep the overpressures in the water as low as possible.

When I pulled my snorkel mask over my eyes and dove into the water for the first time after the explosion, I was happy to see that indeed, the shot had performed well and that a few elusive fish had remained in the jump pool and survived mere feet from the explosion. The feeling was bittersweet though, as we also recovered a handful of juvenile fish, four adult pinks and one sockeye that were within five or 10 feet of the blast and were not so lucky. We examined these fish internally to learn about the nature of their injuries. While it was unfortunate that fish died during the project, in the grand scheme of things, with the hope of hundreds of years of improved sockeye escapement, the sacrifice was small. 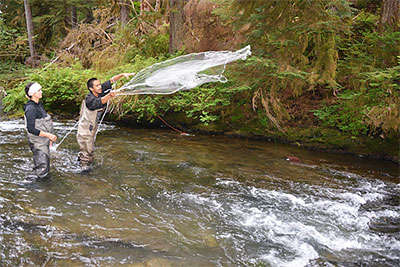 Research efforts to study the impacts of blasting and pile driving across the nation are sparse and understanding and estimating how overpressures affect fish at a particular site is complicated. The 20 juvenile coho that were kept in test cages with hydrophones monitoring the overpressure survived with no signs of injury. Using this opportunity to understand how explosive forces can affect fish in a natural setting will help the department to make better permitting decisions when blasting for roads, hydros, and fishpasses cannot be conducted in the absence of fish.

Thanks to the Division of Commercial Fisheries and USFS efforts, we are fortunate to have a falls escapement dataset that will span the time period before and after the falls modification. We look forward to seeing results.