What happens when you spy on a beaver? 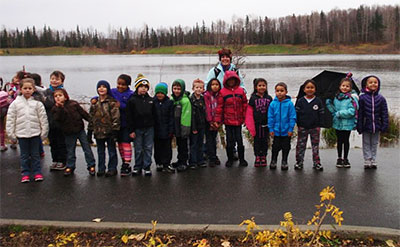 First graders at Campbell Elementary in Anchorage prepare to set up a trail camera at Taku Lake.

How do first-graders feel about setting up a trail camera and capturing animal pictures? “Excited, surprised, happy and glad,” is how the first graders at Campbell Elementary in Anchorage responded as the images were revealed from their “critter cam.” Educators with Alaska Fish and Game are introducing teachers statewide to trail cameras and providing camera kits.

These camera kits teach students about wildlife, habitat and their home in Alaska. The first graders at Campbell started with a field trip to nearby Taku Lake to investigate where they might place a critter camera. All three classes at Campbell made the trip to Taku Lake, one of the many lakes in Anchorage surrounded by a multi-use trail. How did they know where to place the camera?

“Well, there were signs that beaver were nearby, the lodge and bite marks on the trees,” said one girl.

Taku Lake’s shore is punctuated by tree stumps gnawed to a chisel by some very busy beavers as they stockpile trees just under the water’s surface for the winter.

“We saw water moving around the lodge, so we knew there could be beavers there,” said another student. In addition to these astute observations of beaver habitat, most students reported having seen a beaver before, so they already had an image in their minds of what the camera might reveal.

They attached the camera to a likely tree in a promising spot. Students returned a few days later to find the camera missing - as well as the entire tree. During the night, a beaver had gnawed down the tree and dragged it into the lake. Yes, the beaver absconded with the tree with the camera attached. Luckily the camera was waterproof and was secured to the tree with a yellow bungee cord. The teachers were able to retrieve the camera and the images taken during the night. 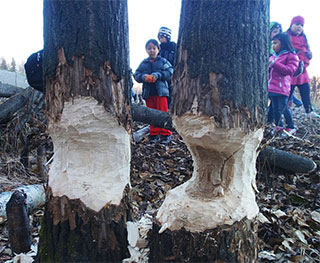 Rarely do we have the opportunity to catch beavers at work and we’re more likely to see the end result of their efforts. Beavers most often do their work in the late evening and through the night, as was confirmed with the time and date stamp on each frame. Before the camera went into the drink, it also captured an unexpected visitor to the lodge - a red fox. The camera shows fox pacing and returning to the lodge several days in a row with its nose engaged.

Most students confirmed that they expected to see a beaver, but were surprised to see the fox and the murky underwater image from the lake. When asked what they thought the fox was up to, they replied, “Hunting! Trying to find the beaver.” A perfect scenario to learn about predator prey situations for first graders who, in the Anchorage School District are learning about Alaska’s animals as part of their science curriculum.

“This project was a great introduction to Alaskan animals and when they are active,” said Lee Miracle, a Campbell Elementary teacher. “A few students already knew that some animals are nocturnal. We were all amazed to see so much nighttime activity. We had interesting discussions about what the beavers and foxes were doing and why they might be so busy at night. It was also great to see pictures of the beavers at work and to walk around and observe the trees and see how the area had changed.” The cameras enhance childrens’ capacity to internalize the relationship between habitat, animal sign and the actual presence of wildlife. For first graders, this is a terrific step forward in appreciating and understanding your surroundings.

“On our first field trip when we set up the cameras, teachers pointed out various animals and signs that animals had been there, like trees that beavers had cut down,” Miracle said. “Afterwards several children had a hard time writing about what we had seen on the field trip. When we looked at the critter cam photos we had to look very closely to find the animals and figure out what they were doing. We were fortunate to have so many photos to hone our observation skills. When we went back to pick up the cameras, children were excited to point out animals and signs that animals had been there to each other.”

Other students around the state have benefitted from the cameras use and were able to observe moose, bears, snowshoe hare, deer, eagles and a great horned owl in various locations. Not all classes are successful at trapping images of wildlife, but that in itself is a lesson. What was the weather like those days, do animals move about during that time? The cameras are triggered by motion, so even a windy day and moving tree branches or a wayward dog on its walk will net an image or two. Trail cameras help to answer questions and create new ones which help students engage in inquiry, the basis for scientific discovery. 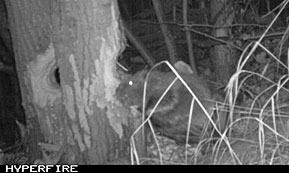 The infra-red flash at night renders a black and white image of a Taku Lake beaver.

Cameras are available to teachers throughout the state and can be borrowed free of charge. The Alaska Department of Fish and Game will mail ‘Critter Camera Kits’ to teachers or make arrangements for pick up. Teachers return the cameras in a same way they were sent and can use the cameras for one to two weeks at a time. More information is available on our website at http://www.adfg.alaska.gov/index.cfm?adfg=educators.teachingkits along with a new guide, “Furs of Alaska Mammals” and an associated fur kit- among many other types of educator resources.

They say seeing is believing. May our children see and believe in the special place they live and begin to and continue to care for their home - Alaska.

Brenda Duty is the Project WILD and Youth Education Coordinator for the Alaska Dept. of Fish & Game. Although her duties are statewide, her office is in Anchorage. If you are an educator (homeschool, community school, camp leader, etc) and would like to check out a camera kit, contact her at 907-267-2216 or Brenda.Duty@alaska.gov