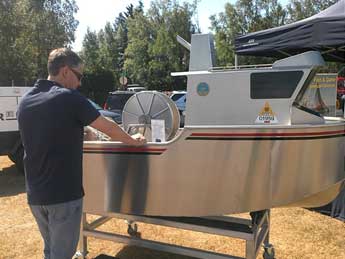 Division of Commercial Fisheries Director Jeff Regnart and the F/V Sustainability at the Governor’s Picnic.

The idea arose November 2012 while division staff was attending Pacific Marine Expo in Seattle. The 8-foot replica boat was built by Armstrong Marine and on display at their booth. Crowds of Expo goers were drawn to the display like a fish to a shiny lure, impressed by the life-like details of the little boat. Immediately CF staff began weaving together ideas of the educational possibilities to teach Alaskans about the diverse and valuable commercial fisheries that take place in their own back yard using the little model as a tool. Along with some determination and support from staff and industry, the F/V Sustainability became a reality in spring of 2013!

Icicle Seafoods, Don Norton of F/V Viekoda Bay, and Slim Morstad, Bristol Bay Commercial Fisheries area management biologist, provided support, transportation, and funding as the F/V Sustainability made her way to Alaska earlier this year. A small crowd gathered to meet Johnny Armstrong, part of the family owned company, as he delivered her to the dock and Don Norton in mid-May. Once safe and secure on deck of the F/V Viekoda Bay, they left Port Orchard Railway and Marina and set sail north bound for Homer. The journey took a few weeks but she arrived safe and sound after a couple of short stops in Kodiak and Larsen Bay.

Division of Commercial Fisheries staff have been working to increase awareness of science, salmon, and commercial fisheries in Alaska. And with our message riding on the fo’c’sle of the F/V Sustainability, the ultimate goal of the Commercial Fisheries education program is to foster and promote a sense of the living culture and sustainability of Alaska’s commercial fisheries. Knowledge that is gained through interactive tools such as the FVS will help inform and empower Alaskans, both young and old alike, to become more engaged future stakeholders in Alaska’s fisheries. 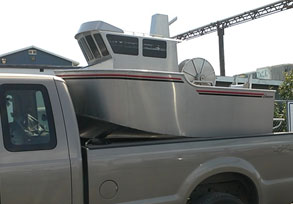 The F/V Sustainability loaded up and ready to ride after her arrival in Alaska courtesy F/V Viekoda Bay and Icicle Seafoods.

As expected, the FVS was well received in Homer upon her arrival. After stopping for multiple photo shoots and answering numerous questions from excited youngsters and young at heart, the F/V Sustainability made the long road trip back to Anchorage where she became an instant celebrity! The FVS spent the summer getting spiffed up for public events and made her first debut at the Governor’s Picnic at Delaney Park Strip on Saturday July 23rd. Despite the rain she was the highliner of displays along with the ADF&G Divisions of Sport Fish and Wildlife Conservation activities that kept the booths packed.

Like many real commercial fishing vessels the F/V Sustainability was hauled into the yard of a local welder this fall for some work. Upgrades include construction of a travel trailer/display stand that will allow the FVS to travel to Fish and Game events around the state with ease. Other additions will include installing a special made miniature gillnet onto the moving deck reel, adding hooks to hang the slush ice and brailer bags in the fish holds, graphics, and welding moving components such as a steering wheel and throttle on the deck. The FVS was even issued a very special vessel license number by the Commercial Fisheries Entry Commission. She received ADF&G 01959 or 1959 for short, the year Alaska became a state and took control of our fisheries from the US Government and gave them to the newly formed ADF&G. 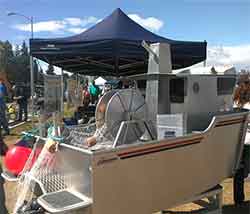 Once completely outfitted the F/V Sustainability will be on display at the William Jack Hernandez Sport Fish Hatchery in downtown Anchorage on Ship Creek. When she’s not traveling the FVS will be used to teach visitors how hatcheries have become an important part of the state's economy, releasing millions of fish annually for harvest by recreational and commercial fisheries.

And that’s not all, the possibilities are endless. There is potential for the F/V Sustainability to pair up with our partner agencies to teach Alaskans about commercial vessel regulations, licenses, permits, boating safety as well as wise use and conservation of Alaska’s seas and coasts.

Together with the help of interactive educational tools such as the F/V Sustainability, ADF&G is committed to fostering stewardship in Alaskan communities that are connected together by common threads – fisheries, sustainability, science and the amazing wild salmon that weave them all together.

Katie Sechrist is an information officer with the Division of Commercial Fisheries in Anchorage.