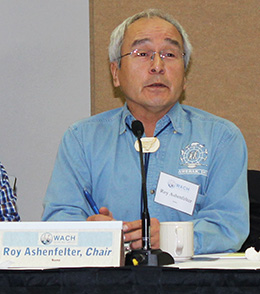 Roy is retiring after nearly 20 years of outstanding service to the Northern Norton Sound Fish and Game Advisory Committee and other boards and committees that advise on subsistence issues. Advisory committees are the local "grass roots" groups that meet to discuss fishing and wildlife issues and to provide recommendations. There are 82 committees throughout the state each with expertise in a particular local area.

Roy is known as hardworking, knowledgeable, dedicated and an extremely effective chairman of the Advisory Committee. Roy has dedicated considerable time to the subsistence and wildlife resources in the Norton Sound region, and is actively engaged with the communities and agencies he serves. In addition to the Advisory Committee, Roy is Chairman of the Western Arctic Caribou Herd Working Group, a member of the Seward Peninsula Muskox Cooperators Group, and participates in the Circum-Arctic Rangifer Monitoring and Assessment group out of Canada. He also attends the North Pacific Management Council annual meetings. Roy will be retiring from these positions this fall, to enjoy time with his family and subsistence lifestyle.

Jim Magdanz, a retired subsistence specialist for the Alaska Department of Fish and Game said Roy will be missed.

“Roy understands the issues, he understands the regulatory system, and he understands people,” Magdanz said. “He actively listens to advisory committee members. He helps them find consensus on difficult issues. And he effectively communicates the committee’s wishes to both Boards. I will always remember his successful leadership on the rod-and-reel subsistence proposal for northern Norton Sound, where he made the proposal both logical and appropriate to somewhat skeptical board members.”

Although modest about his accomplishments with fisheries, many credit Roy for playing a key role in bringing the crab fishery back to Norton Sound. As a result of his leadership on this issue, the population stabilized and actually increased. The local Norton Sound Crab Fishery is economically speaking, the largest commercial fishery, in the region. 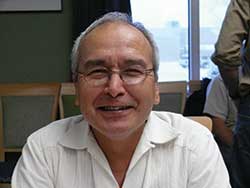 “Roy is an excellent spokesperson. His diplomatic skills are phenomenal and he remains objective, while keeping a lid on hot tempers that tend to fly around,” says Charlie Lean of Nome, the vice-chairman of the Northern Norton Sound Advisory Committee.

Quite often, the best course of action concerning difficult regulatory situations were brought forward to the Boards by the Northern Norton Sound Advisory Committee. For example, after the state’s first Seward Peninsula muskox hunt stalled before a federal Regional Advisory Council in 1996, the committee, chaired by Roy, helped design a compromise that eventually provided both state and federal muskox permits on the Seward Peninsula and benefited all user groups.

Roy certainly will be missed. How much we may not fully appreciate until he is no longer serving as the leader on the Northern Norton Sound Advisory Committee.