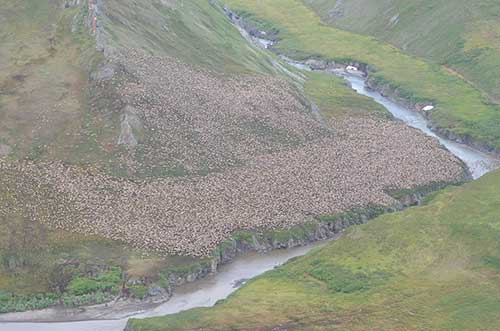 A large aggregation of caribou along the Kivalina River. ADF&G coordinates with U.S. Federal and Canadian agencies to set up the photosurveys used to estimate caribou numbers. Photo by Nate Pamperin.

Counting caribou via aerial photography depends on a heap of good planning and equipment plus a good bit of weather luck.

In the period of time following calving, caribou can form large aggregations while they seek relief from insects. Insect harassment intensifies under warm, calm weather conditions and caribou tend to group in places where cooler temperatures or more wind may exist such as along the coast or at higher elevations. When these large aggregations form, it allows a photocensus crew to take photos while an entire herd may be contained in relatively few densely packed groups. If a caribou herd is sufficiently grouped, a photocensus plane flies over each group and takes pictures ensuring that the entire group is photographed, including shooting so that there is overlap among photographs.

It takes two specially equipped state aircraft and a fleet of contract aircraft and pilots, numerous biologists and an analyst-programmer, lots of preparation and testing, $20,000 in film and developing and hundreds of hours counting caribou dots on photographs. The respective Area Biologists vigilantly monitor their herds from mid-June through mid-July watching for the aggregations that may last a matter of hours to a few days. A change in wind speed or direction or a cumulus rain cloud can scatter the caribou. The two photo-plane crews remain on standby throughout the period, sometimes staging separately in strategic areas - such as the remote Eagle Creek airstrip on the Kukpowruk River on the western arctic slope - to be ready to depart when and if the manager says it is a go. 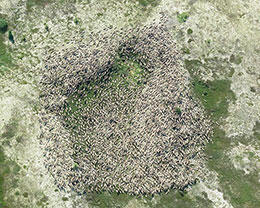 A large group of caribou photographed by Colleen Bue from almost directly above. Images such as this (although much larger and higher resolution) are used to count caribou in these large aggregations.

This past summer was a demanding, but successful photocensus season. Favorable weather conditions occurred early in the season, but a lack of insect harassment (perhaps due to late spring) led to poor aggregations for the herds that in the past had aggregated early. Things started coming together on the 3rd and 4th of July on the North Slope with the Central Arctic herd. The Palmer based photo-plane crew team got the call the night before and launched in the wee hours to rendezvous with the others 600 miles away on the North Slope. Fog, mist, and multiple cloud layers in Broad Pass prevented two attempts to cross the Alaska Range.

Coordinating from Fairbanks, Biologist Jason Caikoski initiated Plan B. He contacted the second photo-plane crew that was staging at Eagle Creek in anticipation of surveying the Western Arctic Herd. The second crew traversed 350 miles across the North Slope to successfully photograph the Central herd that evening. That survey started a 12-day, five-photocensus run including an international shoot of the Porcupine herd using two ADF&G photo planes on the same day.

It is a testament to their preparation and dedication that these crews – at a moment’s notice – can be enroute to conduct these surveys anywhere in the state and sometimes western Canada. This year’s effort for the Porcupine herd found one crew in Palmer one afternoon and over the Richardson Mountains in Canada the next.