A Sense of Place
Summer Field Work in Southeast Alaska 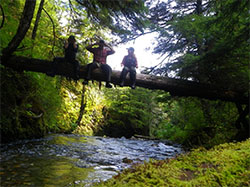 I am veiled in spider webs. Marinating in sweat and bug spray, and seasoned with pollen and pine needles. Eight-o’clock in the morning already bears the heat of the afternoon. Sunlight climbs down, limb by mossy tree limb, to play across the tannic pools of the stream my crew and I are mapping. We pause and peer into the glassy water, watching for coho fry. The tiny fish cast shadows against the gravel of the streambed. They are active, feeding, fighting, and defending territories. The coho’s behavior is vastly different than the Dolly Varden they share the stream with. Upon our approach Dolly Varden panic and scramble for the nearest rock or root, taking refuge from our looming silhouettes. Coho, however, are unfazed, drifting through the water in schools anywhere from ten to hundreds. Even after being scooped up in a net and examined, once released they go right back to nipping at one another and chewing on anything they can find at the surface.

Perhaps it is a result of many long days in the field, but after a while, the clinical-sounding “behavior” of these animals becomes personality. While Dolly Varden are flighty and nervous, coho fry are charismatic, playful, and bold. Through sheer familiarity do we bestow upon these creatures human characteristics. In turn, the wilderness molds us into stealthy navigators. The forest absorbs us the moment we step off the road into the ferns, devil’s club, and skunk cabbage. We have learned to use “highway logs” as a means to span great swaths of otherwise morale-busting blueberry thickets. Game trails lead us through the thickness of the understory. Plants growing in muskegs indicate ground that is solid, and ground that will give way to thigh-deep mud pits. If one moves with the grain of the forest, one will emerge relatively unscathed. If one tries to push against the forest, it will push back with all its stabbing, biting, stinging, tripping might.

After heaving and swearing our way through a log jam rodeo, we catch our breath on a grassy bank next to a pool teeming with coho. There, the world telescopes in on us. All that exists is the rowdy crowd of fish before us, and the game that emerges of slapping bugs and flicking them into the water. The fish dash to the surface, grab a mangled mosquito, and dart about with spindly bug legs dangling from their mouths. Exhausted and captivated, we fold ourselves onto the pungent, earthy lap of the bank and play fetch with the hungry mouths below. For a wisp of time we are kids again, rediscovering why it is we do what we do. 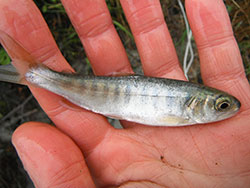 I think back on all my “field experience”; the kind one cannot put on a resume, but that paved the way for a career in which chest waders are as familiar as pajamas and GPS-rage is more prevalent than road-rage. Snorkel surveys? Why yes, my first experience was plunging my face into the cool waters of Big Goose River in northern Wyoming, just off the porch of my house. I was seven. A sun-dappled, golden world opened up before me. The snorkel mask magnified the granite flanks of rounded boulders and the dark passageways between them. I let gravel drift between my fingers and watched it settle in slow swoops to the riverbed. Out of the corner of my eye I glimpsed a tail. I slowly turned and found myself staring at the bespeckled body of a brown trout. He was just hovering there as if I didn’t exist! I reached out a hand towards him and he briefly darted, but hung there in the water, calm and almost docile. I periscoped to search for my little brother, but he was face-down in the water, toeing and elbowing his way through the river rocks, chasing his own discovery.

My minnow trap time came during my impressionable years as well. My brother and I sat on the sun- warmed wood of the dock at Diamond Creek near our home, baiting the metal mesh traps with dog food and lowering them into the feathery weeds of the pond. Later we retrieved them and hauled up a thrashing, hissing load of minnows. We delighted at pouring the fish back in a silver cascade, only to re-bait the traps all over again. I’m sure those poor beasts either learned to flee at the scent of Purina, or sprouted legs and hiked themselves out of that primordial swamp.

I learned hook and line techniques while standing between my father’s arms as he held my hands on the fly rod, roll casting into the mirror of Lost Twin Lakes. I was four years old and struggled to say “improved clinch knot”, but I knew the best way to season trout was with sea salt, tarragon, and love.

Twenty-three years later I still feel the anticipation of pulling a minnow trap from a deep pool in a remote river. Placing bets on what it holds, we draw the trap’s ghostly form from the murk, watching for the tell-tale flashes of fish. What could be in there? I’ve captured water shrews, frightful-looking dragonfly larva, beetles of all girths, newts, blue-eyed stickleback, grumpy sculpin, trout, char, and the whole suite of pacific salmon species. 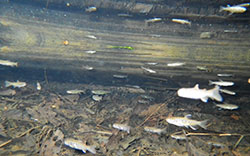 I find myself swaddled in a drysuit in the middle of November searching for adult coho salmon in a creek north of Juneau. I squish the snorkel mask onto my face and sink into the icy water. Again the underwater world is magnified, and I am floating with a school of Dolly Varden, resplendent in their silver, white, and orange spawning colors. Suddenly a flash of crimson speeds between them. I follow it to a submerged tangle of roots and logs. I peek over a branch and there, shyly tucked away in the arms of the debris is an adult coho. It moves slightly so all I can see is its shadowy red flank. I gently push away and leave it be; it seems so timid and spooked, almost like a refugee…nothing like the jovial extrovert it was as a youth.

I feel a quick zing of sadness and honor, having witnessed the entire life of this animal. From tiny fry whose bellies are barely buttoned up to roving packs of juveniles battling for feeding space; from shimmery torpedo-shaped smolts ready to begin life at sea to wizened spawners stoically defending their redds. This fish has found its way home against formidable odds and is quietly slowing down.

My love for and fascination with wild places and wild things has percolated through my years and culminated in fieldwork in Alaska. It brings to mind a quote from John Muir: “If you tug on something in nature, you find it attached to the rest of the world.”

Indeed, I spend a great deal of time tugging on nature to make sure the rest of the world knows it exists.

…And nature does its fair share of tugging on me in return.