Don’t Let it Loose!
How Some Invasive Species are Introduced to Alaska

Descended from pet snakes released to the wild, Burmese pythons are an invasive species plaguing Florida. It's important that non-native animals are not released into the Alaska ecosystem.

Maybe you saw it on the evening news or your favorite reality television show. This January the Florida Fish and Wildlife Commission hosted a Python Challenge in the Everglades that drew more than 1,000 participants and countless observers. The plan: if humans can nearly or completely wipe out entire species by unintentionally overhunting, then maybe invasive species can be eradicated by siccing the hunters on them. The moral of this story is that pets released into the wild can become an invasive species problem. Yep, those pythons in the Everglades started out as someone’s pet! Florida is home to many other rogue pets, including lionfish, various parrots and cockatoos, Gambian pouch rats and Mexican red-bellied squirrels. You’re thinking, “But, Alaska and Florida couldn’t be more different.” You're right; but Florida is an extreme example of what can happen when pets are released into the wild, are able to overwinter, and then develop breeding populations.

No doubt, Florida offers a much more accommodating climate compared to Alaska, and I’m certainly not suggesting that Alaska is concerned about the establishment of pythons. However, over the years the Alaska Department of Fish and Game (ADF&G) has investigated reports of a number of nonnative animals that started out as pets, either in someone’s home or in a classroom. This year we’ve received more reports than in previous years.

The increase in reports may be the result of outreach efforts by agencies and organizations to identify invasive species statewide. If the public is better informed about the types of organisms to look for and the effect nonnative species can have on our native ecosystems, then maybe they will report something as unusual as a blue-spotted salamander or as common as a koi (goldfish). We’re hoping this information will also help pet owners and teachers to be more responsible when it comes time to get rid of an unwanted pet.

First, there was the red-legged frog. In the 1980’s a school teacher purchased a few clusters of frog eggs from a biological supply house. The teacher provided a learning opportunity as the class nurtured the eggs to tadpoles and then to frogs. When the end of school came the teacher did something many pet owners think of as the compassionate way to get rid of a pet that is no longer wanted - the teacher released the frogs into the wild on Chichagof Island.

What’s the matter with red-legged frogs leaping through the lowlands of Southeast Alaska? First, because they are not native, they may threaten the viability of the native Western toad populations on the island. Next, the released frogs may carry parasites, pathogens or diseases, such as the chytrid fungus, that could infect native amphibians. Chytrid fungus has caused significant declines in amphibian populations globally.

Perhaps the teacher didn’t have the heart to euthanize the pets himself. He certainly wouldn’t be alone in that sentiment. Oregon State University (OSU) and Oregon Sea Grant investigated the role that teachers and biological suppliers play in the introduction of invasive species into the wild. They found that one in four educators who used live animals as part of their science curriculum released the organisms into the wild after the lesson or the school year was over.

“Teachers are evenly split over the idea of euthanasia,” said Sam Chan, Oregon Sea Grant Extension invasive species expert. “…Our goal as researchers is to make the teachers and biological supply houses aware that releasing organisms into the wild may cause problems and to think about using native species in lessons whenever possible.” 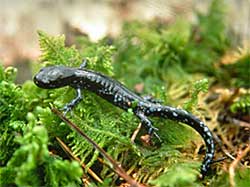 Teachers involved in the study were mortified when they realized their role in the invasive species problems. “They want to be part of the solution, not part of the problem.” But some pet owners have a different perspective on introducing new species to Alaska.

One might think that a cute little salamander found scrambling around in the Midwestern wilds could not live through the rugged Alaska winter, and one would be wrong. This spring, ADF&G received a report from a woman who had found a blue-spotted salamander hiding under a barrel near her greenhouse in the Palmer area. Born and raised in the area, she’d never seen anything like it before so she did a search online to try to identify the little, bluish-black creature. After nailing down its likely identity and native range, she supposed it might have been a neighbor’s pet. Sure enough, when the neighbor learned a salamander had been found, she said, “(I) was very happy to see that the blue-spotted salamander from Wisconsin that…. (I) released had survived the Alaskan winter.”

When I called the neighbor to follow up on the report, she said, “What’s the harm?” She knew salamanders didn’t exist in Alaska and thought the transplant wouldn’t live. In some cases, the harm isn’t known until the animal or plant has become widespread and native species populations dwindle or disappear; there are too numerous examples of that occurring globally. Think back to the Florida pythons, I would guess those pet owners thought, “What’s the harm?”

Granted, the blue-spotted salamander may not be your typical pet store or biological supply house animal; nevertheless, it was brought to Alaska to be held as a pet. Goldfish, now there is an archetype of a pet store purchase. This year ADF&G has gotten two reports of goldfish found in Alaska lakes; one from Gustavus and the other from the Wasilla area.

Goldfish are able to tolerate fluctuations in water temperature and in water with low dissolved oxygen. In healthy ecosystems, native species don’t seem to be largely effected by the presence of goldfish; however, in degraded systems they may impose negative impacts by preying on native fish eggs and young fish, as well as consuming snails and aquatic plants. Goldfish can carry diseases and parasites, as do other aquarium species.

If you have been following Alaska invasive species issues over the past few years, you may have learned that Elodea, a fresh water aquatic plant, has been introduced or spread statewide- from Cordova to Anchorage, down on the Kenai Peninsula and up in the Fairbanks area. A total of 16 water bodies are known to have Elodea infestations.

For years teachers in the Anchorage School District have been using Elodea in their classrooms as part of their science curriculum. Because of its asexual reproduction and easy, rapid growth, it seems to make sense to use this plant. The problem is what to do with all those plants when the school year is over. Likely, most plants are disposed of in trash bins around the city. It is thought that the Elodea in Chena Slough may have originated from a home aquarium, and it is possible that the Anchorage populations did, too.

Live animals and plants are undeniably an effective and economical tool for teaching students about the natural world, and pets are valued members of our families. Yet, animals and plants are frequently released into the wild when the school season ends, or we no longer want to or are able to care for pets. Releasing plants and animals into the wild without a permit is not legal in Alaska, and it is inhumane. The animal could be killed by something in the wild, or it could slowly starve to death. Conversely, it could live, reproduce successfully and then create problems for Alaska ecosystems.

Invasive species are significant because they pose a threat to native environments, Alaska economies, and potentially human health. In some cases the negative effects of invasive species cannot be recognized for many years, after populations have become widespread. Prevention is the name of the game with invasive species. First, we want to keep nonnative species from being introduced or spread. Next, we want to manage or eliminate invasive species as soon as we can after detection. Small populations cost less to manage, require fewer resources, and there is an increased likelihood of successful control.

For those of you considering adding a pet to the family, anything from an exotic animal or a common goldfish, please consider:

With the school year on the horizon, teachers thinking of getting a classroom plant or animal:

Now, what about those red-legged frogs? In the recent past, the U.S. Forest Service and the University of Alaska, Southeast have surveyed Chichagof Island red-legged frog populations. They have sampled native and introduced frogs for signs of chytrid fungus. They concluded that no pathogens or diseases were present in the populations surveyed, and that for the time being, no notable impacts to Western toads were observed. Luckily for us, Alaska isn’t home to pythons!

ADF&G requests the public let us know when they find something they suspect is not native, call 1-877-INVASIV anytime. Learn more about invasive species in Alaska

Tammy Davis is the Invasive Species Program coordinator and has a pet dog named Zoe.