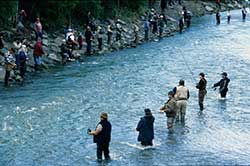 “The city,” a term applied to Alaska’s largest metropolis is a fitting handle for the locale. I’m new to the space and new to this position with the Alaska Department of Fish and Game. I have migrated south from Fairbanks (Alaska’s second most populated town). And after spending a few months in this area, I realize now why Alaskans from other areas tend to shudder at the thought of entering the otherwise chaotic vortex of steel, traffic and commotion. It can take some getting used to.

Admittedly, if it were not for the abundant fishing opportunities and access to wild spaces within a few miles of Anchorage, I’d be more inclined to favor a home defined by the solitude of wintering spruce forests or the sound of open tundra.

Before fishing on Ship Creek, a creek that almost literally passes through downtown Anchorage, I’d read about the fishery and had stared in awe at the many photos in books and online depicting anglers in business attire and waders mid-stream, fighting salmon. Also, I’d spoken extensively with other Sport Fish Division Fish and Game representatives in the Anchorage office about when and how to fish kings in Ship.

I began as the Information Officer in the Sport Fish division around the time kings started to enter Ship Creek. It was early June and the weather was beautiful. By regulation, the season for sport fishing king salmon in the open area is January 1 through July 13. Anglers are allowed to retain one king salmon 20 inches or longer per day, but must stop fishing for the remainder of the day for any species in waters open to fishing for king salmon.

I’d been recovering from a long, relatively fishless winter, and while I was certainly excited to wet a line, I was equally excited to familiarize myself with what is arguably the most popular sport fishing waterway in Anchorage.

I had plenty of gear from my many fishing excursions throughout the state, but after a quick discussion with a colleague, I realized I was underprepared.

“Soak eggs during the tide cycle,” he said, further mentioning that he prefers to begin fishing about an hour before high tide.

I’m sure he noticed the confused look on my face when he said that. First, I’ve never been much of a bait fisherman. Second, I’ve never lived close enough to the ocean to really know and understand tide cycles. But I’d had enough experience fishing new locations to know local knowledge is the best starting point – after that, the strategy of experience is gained by implementation and trial by error. 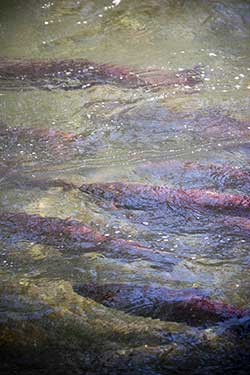 Upon arriving at Ship Creek, I grabbed a container of cured salmon roe from a small bait shop adjacent to the waterway. I spoke with the shack’s owner and received some further intel on how not to get skunked. I was two hours before the peak of high tide and the stream banks were relatively sparse. I selected a location based on intuition, rigged up and threw my bait set-up in the water. I sat back and felt anxious. Normally I’m a very active fisher, preferring to target species on the fly. Sitting back and waiting for a strike felt more like fishing for catfish than it did fishing for Alaska’s aptly named king.

Despite the few people I saw milling around, the area was quiet. Peaceful even. I was beginning to enjoy myself and allowed my thoughts to saunter off. I wondered how such big kings could be caught where less than five blocks away in any one of the large buildings, executive business meetings were likely taking place. I thought to myself, “This is Alaska?”

As I sat and observed, more and more people began to show. People of all ages and ethnicities; families, tourists, tattooed biker-types, all brought to the water on behalf of the great return of the king. “Cool,” I thought, and began to realize the benefit and unique aspect of a community that is strengthened by such great fishing within city limits.

The first strike was subtle, so faint, in fact, I thought a piece of river debris had momentarily caressed my line. It came during the tidal window my colleague spoke about. A quick tap on the line. Then nothing. I went back to observing life on the river’s edge.

Up to that point, the activity was slow. I’d heard faded shouts from downriver and assumed some lucky angler landed a fresh king. It was at that point when I realized I failed to bring a net. I looked around at the anglers sitting as I did, waiting to hook up, and I noticed several nearby had large-hooped nets laying shore-side.

The shouting intensified and edged closer to me. At one point I saw an angler not too far away net a fairly big king. My anxiousness took over, and I grabbed the rod from its resting place and held it in my hand, forefinger resting on the taught line. I felt the slow current turn. The tide was nearing its peak. The land which lay open on my arrival was now engulfed in a tannic wake. 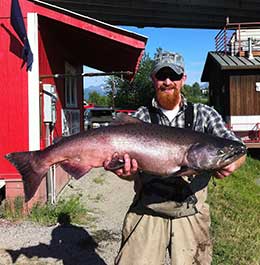 I considered refreshing my eggs, sure that a fresh king wouldn’t resist a clean offering. But I couldn’t bring myself to move the bait.

The second strike was even more subtle than the first. A single tap, as if below the surface reflecting clouds and industrialization, small things fed slowly. A moment later, another tap. Then another. I was so convinced that no king would feed with such petite mouthing that by the fourth tap I set the hook more out of aggression than necessity.

The fish turned like a difficult question and pulled line as the drag screamed. I was too dumbfounded and mute to proclaim the customary saying, “Fish on!” Instead, my bank neighbor, who’d seen my rod bent over and heard my drag spinning made the announcement for me. I managed to come to my senses enough to begin handling the fight as an angler should. This was my first hook-up on a Ship Creek king, and as I watched the fish run across the water like it was running a maze, I remembered the forgotten net. Luckily, another neighbor offered to net the fish for me. Still focused and mute from concentration, I simply nodded and walked toward the angler with the open net.

The subdued fish came to the shore and I led its sleek frame to the confines of the net. Once I saw the fish was secured, I relaxed my grip on the rod and let my line go slack. The netter asked if I wanted to keep it, knowing that a king intended to be released must be left in the water, and on my approval he lifted it to shore.

The crowd of onlookers made up of both anglers and observers cheered at the sight of a semi-blushed king exiting the drink. I removed the hook from the fish’s mouth, slid two fingers under the gill-plate and removed it from the net. After bleeding the fish, I marked my license 6/24/13.

I fished Ship Creek a few times after and had success on each outing. All told I took three kings this year from the creek ranging in size between 18 and 23 pounds. It’s early August now, and reports from the creek are that the silvers are plentiful. I’ve been fishing a lot lately in the myriad waterways of this region. Each day I learn and become even more fascinated by the complexities of the Southcentral fishery. I feel more than blessed to be doing what I do, living in an amazing place that once seemed all too foreign and off-putting to me. And I’ll be down again soon, timing my arrival with the tides, to a place where this quintessential city welcomes the return of some of its most prized visitors.