The long, cold winter of 2012-2013 with its bitter last days and lingering snows has some wing-shooters nervously wondering if this year’s upland game bird nesting season was a bust. Well, pick up your shooting vest and call the dog; state small game biologist Rick Merizon has good news.

“Despite the cold start to the breeding season,” Merizon reports in his summary Status of Small Game Along the Road System 2013, “conditions in June were ideal for grouse and ptarmigan nesting, early chick survival, and for the insects and vegetation on which they depend.”

As he’s done in previous years, Merizon spent this spring and summer traveling throughout Alaska, observing and surveying small game populations. Here’s an early look at what he found:

Interior ruffed grouse tend to follow distinctive cycles of scarcity and abundance. This fall, Interior ruffed numbers should be rebounding, Merizon reports, from a low cycle where numbers bottomed out in 2010.

“It does not appear that the late spring had a significant negative impact to Interior ruffed grouse populations other than delaying drumming activity by seven to 10 days,” Merizon writes.

Meanwhile, ruffed grouse in Southcentral Alaska’s Mat-Su region have continued to expand in number and range. No particular cycles have been noted in these populations and hunting for them in preferred habitat pockets should be good this fall.

In Southcentral, habitat and pockets of birds can be found along the Glenn Highway from Palmer north to Sheep Mountain. North and west of Wasilla and along the Parks Highway south of the Alaska Range, look for birds in second-growth areas of old homesteads and burns and in thickets on river bars.

“Spruce grouse densities are expected to be high away from the primary road corridor and lower along traditional hunter access points,” Merizon says.

Overall, he expects spruce grouse numbers to be greater this fall in the Interior, while Southcentral densities are expected to be moderate. 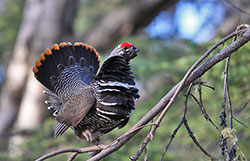 Spruce grouse can often be found around patches of high-bush cranberries and blueberries. Some hunters prowl rural dirt roads and trails on frosty late-September mornings and evenings where they find birds pecking gravel. Others use dogs to work the forests and berry patches. Spruce grouse eat spruce needles in the winter, which can leave the flesh of late-season bird tasting pungent. Birds taken before October are usually the best eating.

Southcentral's Susitna Valley provides hundreds of square miles of excellent spruce grouse habitat. Look for them off the Parks Highway from Willow Creek north to Cantwell. The Kenai Peninsula also offers good gunning for spruce grouse; look for places off the Resurrection Trail or Mystery Creek Road and on south to Oil Well Road near Homer.

In the Interior, hunters will find plenty of grouse along the Dalton Highway from Livengood north to the Yukon River crossing and beyond. The Tanana Valley State Forest northwest of Big Delta on the Richardson Highway and the Gerstle River area southeast of Delta Junction are also good places to hunt.

Southwest Alaska also offers good hunting for spruce grouse, though the region is remote. The road to Aleknagik out of Dillingham is one local hot spot in years when bird numbers are high, but few hunters spend the money to fly there when equally good hunting can be found in more accessible parts of the state.

Merizon writes that Interior hunters can expect higher populations this fall if spring counts of males on leks in the Delta Junction area are any indication. The number of males counted in these select breeding areas increased this spring, he reports. At the same time, field reports also suggest generally greater densities of sharp-tailed grouse.

In Alaska, sharp-tailed grouse are found around open areas such as old burns, spruce bogs, and agricultural fields. Look for birds near clearings bordered by cover offering cranberries, blueberries and rose hips. Sharptails can also be found in semi-open areas of stunted spruce and tundra where bugs and berries are prevalent.

Hunters can cover a lot of ground searching for sharptails making good pointing or flushing dogs a definite asset. Although a few birds can occasionally be found around Lake Louise south of Glennallen and in the region near Sourdough on the Richardson Highway, the best hunting occurs in the vicinity of Delta and west to Fairbanks. Some of the best hunting in this region is found on private land, and hunters can occasionally gain permission by knocking on doors and asking landowners. 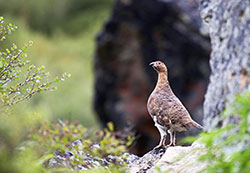 The willow ptarmigan, Alaska's state bird, is the largest of the three ptarmigan species, weighing up to 2 pounds. In a typical alpine valley, these birds will tend to be found in the lower reaches where willow shrubs are prevalent.

He expects willow ptarmigan numbers this hunting season to be moderate in the Alaska, Chugach, Kenai and Talkeetna ranges, and low along the western Denali Highway.

Rock ptarmigan are roughly a third smaller than willow ptarmigan and are usually found farther up the mountainside. Look for them in areas where willows give way to shale slides, rock outcroppings and upended carpets of alpine tundra.

Merizon’s data indicates these birds will be found in pockets of low to moderate densities from the Alaska Range south through the mountains of the Kenai Peninsula.

The Denali Highway near Paxson is a popular destination for ptarmigan hunters, though populations in recent years have been on a lower trend. Meanwhile, hunters might consider looking for ptarmigan in the more sparsely hunted Kenai and Talkeetna ranges. Air-taxi services in Seward, Anchorage and Kenai sometimes offer ptarmigan hunting packages in local mountain ranges. Most drop hunters on remote alpine lakes and pick them up at the end of the day.

Southwestern Alaska offers thousands of square miles of excellent ptarmigan hunting, with areas out of Dillingham and Cold Bay being particularly productive.

Unfortunately, for hunters interested in pursuing hares, Merizon’s observations suggest widespread low cycles are in the offing for 2013. He reports that hare densities in the Interior and Southcentral regions are currently low – near the bottom of the cycle. He adds that, though hare numbers on the Kenai Peninsula have remained a bit higher, the outlook there is for numbers to remain at low to very low levels.

When available in huntable numbers, hares will be found in areas of thick brush which provides both food and cover. Look for them in areas of second-growth around old burns or clear cuts; in slash piles along the edges of fields and clearings; and thickets of willow, spruce and young birch trees.

For more information on small game hunting in Alaska, visit the Alaska Department of Fish and Game webpages.