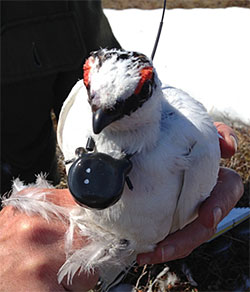 A rock ptarmigan with a radio collar.

Taking the small, clear monofilament nooses off the feisty male willow ptarmigan’s toes I was both surprised and pleased the test worked. We hoped to capture 20 to 25 birds over the coming week and here we had a bird in hand and a capture technique that showed real promise.

We were testing the effectiveness of a “noose carpet,” a 1-foot by 3-foot piece of poultry fencing with 50 to 60 monofilament nooses tied to the fencing wires. Laid flat on the ground like a sheet of tiny footsnares, the monofilament loops effectively tangled in the ptarmigans’ toes. We were able to entice the highly territorial and defensive male by placing a plastic decoy painted like another male willow ptarmigan right in the middle of his territory, with several noose carpets adjacent the “intruder.”

After freeing him from the toe snares we worked quickly to weigh, measure, leg band, and radio collar the male. At this particular capture location along the southern flanks of the central Alaska Range willow ptarmigan densities were quite high and lots of prospective males could be heard clucking and chattering over the tundra. I looked at my partner in eager anticipation of working quickly to collar more birds during the early morning pulse of activity. The birds would settle down in late morning as the day warmed, and then become active again in the evening.

By the end of the week we successfully deployed most of our collars. Radio tracking devices for birds are sometimes deployed as small backpacks; the walnut-sized transmitters we use are attached to “necklaces” and rest below the birds chin, with a short antennae. In this open country, flying in a small plane with a receiver, we could effectively locate these collared birds from five to eight  miles away.

Our collaring effort is a small part of a large joint study between ADF&G, University of Alaska Fairbanks, and the Alaska Energy Authority. Initiated this spring, the goal is study willow ptarmigan distribution south of the Alaska Range in game management unit (GMU) 13. We will deploy collars for three years and monitor annual bird movement, distribution, and survival.

In addition to the willow ptarmigan study, the Small Game Program has been busy with several other projects. Beginning this spring we also deployed radio collars on rock ptarmigan along the eastern Denali Highway in GMU 13B to monitor these birds' annual movements throughout the eastern Alaska Range. However, the very late, cold spring hampered our access to several remote locations and we were unable to capture many birds. We hope to deploy more collars later this summer and again next spring. 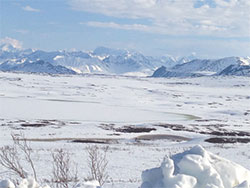 We were also busy this spring conducting annual spring abundance surveys for ruffed grouse, sharp-tailed grouse, rock and willow ptarmigan. Survey sites are generally along the road system between the Steese Highway south to the Kenai Peninsula. Staff in Southeast Alaska also note sooty grouse observations during their annual spring deer pellet surveys. Due to the very late spring, breeding activity was generally delayed between one to three weeks depending on the species and location. Persistent snow also created difficulties for accessing survey locations. An annual report further detailing the status of monitored populations, with more details on the research, and recent Board of Game action will be posted to the Small Game website www.smallgame.adfg.alaska.gov by early August.

All in all the new technique proved to be a great tool. The day after our first capture we checked up on the male ptarmigan to make sure he was doing okay and discovered he was getting along just fine with his new necklace and leg band. In fact, he almost seemed to be strutting around with an extra spring in his step showing off his new bling.

Video is available showing the use of noose carpets to capture a ptarmigan and the processing and deployment of the radio collar. Video is also available of sharp-tailed grouse courtship at a lek in Interior Alaska.