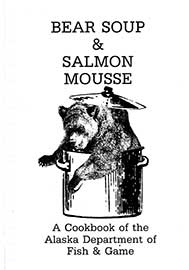 The cookbook was produced by the Alaska Department of Fish and Game sometime in the 1980s. Long out of print, the entire cookbook is now available on the Fish and Game website as a PDF. The PDF can be downloaded in its entirety or single pages can be printed.

In addition to recipes, the cookbook offers tips on brining, freezing and canning salmon, preparing specialty meats like liver and fish heads, and creating sourdough starter. There are actually two bear soup recipes and the salmon mousse recipe can be found after the goose tongue salad recipe – that’s the plant goose tongue, not the waterfowl mouthpart. There is no shortage of waterfowl and game bird recipes. Tried and true recipes for fish and game can be found, as well as somewhat wacky ideas like cooking salmon in the dishwasher (it really works). Recipes for octopus, squid, seaweed, and sandhill crane can be found among the many variations on moose, venison, salmon and shellfish. 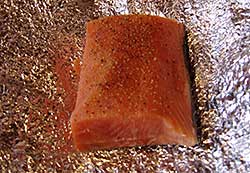 Dishwasher salmon. Wrapped in foil, cooked in the dishwasher. Photo by Riley Woodford