By Riley Woodford and Ken Marsh 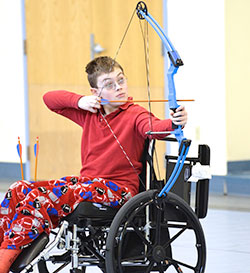 A student from St. Elizabeth Ann Seton School in Anchorage participates in the 2013 NASP tournament. Photo by Jill Hogan

There are some archers in Delta Junction and on Prince of Wales Island shooting at the national quality level - judging by their scores in the National Archery in the Schools Program’s Alaska tournament.

Almost 600 students from 30 schools participated in the 2013 Alaska State National Archery in the Schools Program (NASP) tournament. With instruction and support from the Division of Wildlife Conservation’s Hunter Information and Training Program, young archers from Greely to Gustavus met at their local school gymnasiums to compete against other Alaska schools in the “virtual” tournament.

The student archers ranged from fourth to 12th grades, and included contenders from public- and home-school programs. Prizes were awarded, and many qualified to attend the NASP national tournament in Louisville, Kentucky, in May, according to Program Coordinator Kirk Lingofelt.

Lingofelt described the competition. “It’s a real tournament, but all of the competitors are not in the same place at the same time,” he said. “They hold their shoot with the same rules and standards as everyone else. They shoot five practice arrows at 10 meters, then after that they shoot three more additional ‘ends’ of five arrows each – so 15 shots. Their maximum score for that is 150, with a score of 10 for a perfect shot. Then they do the same again at 15 meters. So 300 is the best you can get.” 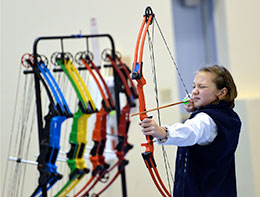 A student from St. Elizabeth Ann Seton School in Anchorage participates in the 2013 NASP tournament. Photo by Jill Hogan

“I saw a kid shoot a 298 at the world tournament in Orlando back in October, I think that is the highest score to date. No one has shot 300 yet.”

Topped only by Bethel’s Gladys Jung Elementary School in the elementary schools category, and followed closely in the middle- and high schools categories by students in Delta, the young archers of Prince of Wales Island’s South East Island School District nearly swept the state with first-place rankings for middle- and high schools. Meanwhile, both of Alaska’s overall high-scoring student archers came from Delta/Greely Schools; Brandon Schmidt and Angela Hannan each turned in scores of 296 points out of a possible 300 total. 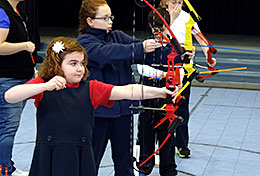 Lingofelt said an archer could score 296 by shooting 26 perfect shots for a score of 10 each, and then four nines, which makes for pretty impressive archery. “An archer who shoots a 296 at the National Level could easily win the tournament,” he said.

NASP is a nationwide youth archery program developed in Kentucky in 2002. Alaska’s program is a joint venture between NASP, the Department of Education, and the Division of Wildlife Conservation. Program partners also include several archery equipment manufacturers and local sportsman’s organizations. The program promotes self-confidence, teamwork, discipline, and physical fitness. To date, more than two million kids across America have participated in the program.

About 10 percent of Alaska schools include NASP in their physical education curriculum. Learn more about NASP in Alaska here or contact Kirk Lingofelt at (907) 267-2534.